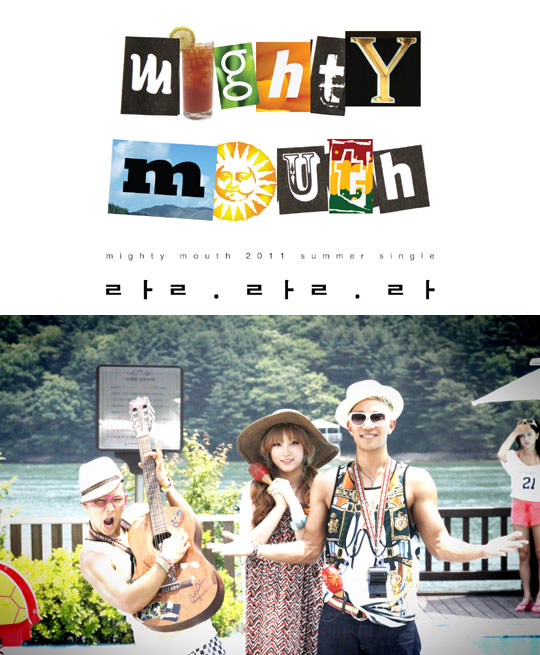 Mighty Mouth makes a comeback to the Kpop scene with a lively summer party track “La La La” featuring Soya.  The track has a high energy Miami beat and has Sangchu and Shorry J partying it up with some friends at the lake.  Both the single and the MV were released on June 29th.  One guess which girl is Soya, aka Kim Jong-kook‘s niece, in the MV.

Yup, that would be the girl wearing the most clothes. The MV definitely reflects the summer party atmosphere of the song and the boys sure do look like they’re enjoying themselves amongst the bevy of bikini-clad babes. I have to say though that there’s probably not much guys in Kpop who would look better shirtless in a pair of surf shorts at the shore than the muscle bound Sangchu and Shorry J.

I like the song, I think it brings something fresh to Kpop for the summer and the Mighty Mouth boys pull it off with their easy going and playful attitude. I have to take off some points for choreography in the MV because some of their moves in the song was so ’80s corny (like at 1:10) that it ruined it a little. Their styling in the MV was a tad off too with Sangchu channeling a Miami rico suave styling with a Hawaiian (or Maori) Hook pendant and Shorry J going surfing local flashing the shaka sign in surf shorts with his Maui & Sons and Endless Summer tank tops.

The song is enjoyable, even with it’s suspect Spanish lyrics thrown in here and there.  I really like Mighty Mouth, Sangchu and Shorry J are two of the most endearing hip hop guys in Kpop right now and their muscles and thug looks at times often belie their cute personalities.  Overall it’s a good summer treat for Kpop.