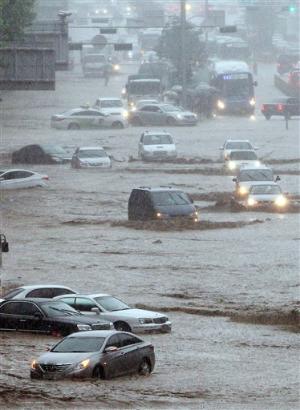 Yesterday, following heavy rains which resumed after nearly a straight month of rain, parts of Seoul and other northern cities flooded (We’re talking feet, not inches of flooding here.), were struck by landslides, and/or lost electricity. At this point, 32 have died from the flooding and landslides, including 10 Inha University students.

Responding to the news of the student deaths, Super Junior‘s Ryeowook tweeted,

@ryeong9: My heart is very in pain. I can’t believe this happened to a group of 8 students from Inha University who went to do voluntary service for the landslides in Chuncheon. I can’t believe it. May they rest in peace.

Members of U-KISS and FT Island also expressed their concern and wishes for everyone’s safety during the flooding over Twitter. Sangchu of Mighty Mouth tweeted in English:

Many lives have been lost in my neighborhood due to heavy rain n landslides today. We are so vulnerable to natural disasters. All victims and their families r in my prayers. R.I.P. 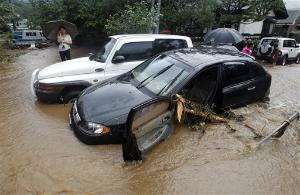 More rain is expected today. Please pray for the families and friends of those who have lost their lives, as well as those who have been displaced by the flooding. Pray also for those who will be affected by flooding from today’s rain.