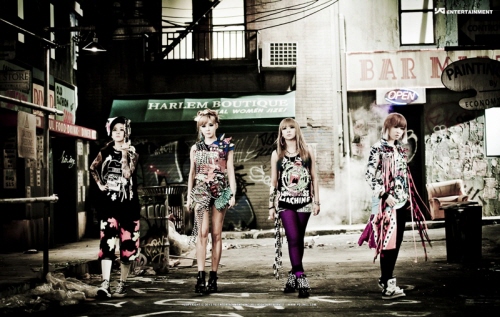 Well, maybe sometimes…  2NE1‘s MV for their song “Ugly” debuted today in the ROK moments before the release of their second mini album 2NE1.  The song is the polar opposite of “I Am The Best” as it speaks of feeling ugly because you feel like crap and everything isn’t working out, people can’t understand your feelings and think they know how you feel, and you just want to get away from it all even though sometimes you also secretly wish to be that perfect ‘Barbie’ that you hate just so that you could fit in.

It’s basically the song written after experiencing the worst day of your life: you get up bloated in the morning, on the first day of your period, it’s a Monday, you have a final for the class you’re failing, your hair’s frizzy, you got a big zit, you spilled your morning coffee on your shirt and there’s a big stain, your mom got on your case about your room and you’re pissed, your boyfriend is being a prick, and… the prettiest girl in school is flirting with him right in front of your face. Yup, that’s the song in a nutshell, check out “Ugly.”

I like the song, okay who am I kidding- I am well on my way to loving it.  It has a Pink vibe to it with its pounding rock chorus, strong beats, and lyrics that aren’t all rainbows and floating pink hearts.  My fave part of the song is the chorus, although I do like the mellow verses with the electronica noise and solitary snare paving the way behind the lyrics.  The MV?  Meh, didn’t hate it or love it.  I’ve never seen girls looking so happy while singing a song about feeling ugly and wanting to be pretty.  I like the look of the MV, but find it lacking in much substance (although I’m sure someone will be telling me there is a deeper meaning in the MV which is about raging against the standards of beauty or something).  It’s following a common 2NE1 MV format of the girls walking through various sets in a video to music and dancing or singing.  2NE1 definitely has had some awesome MVs, the last being the anime-rific MV for “Hate You,” so I can live with this one especially since it’s the fifth consecutive one they’ve released in anticipation of the debut of their second mini album.  When you’re doing so many MVs in a row like that, they can’t all be masterpieces. 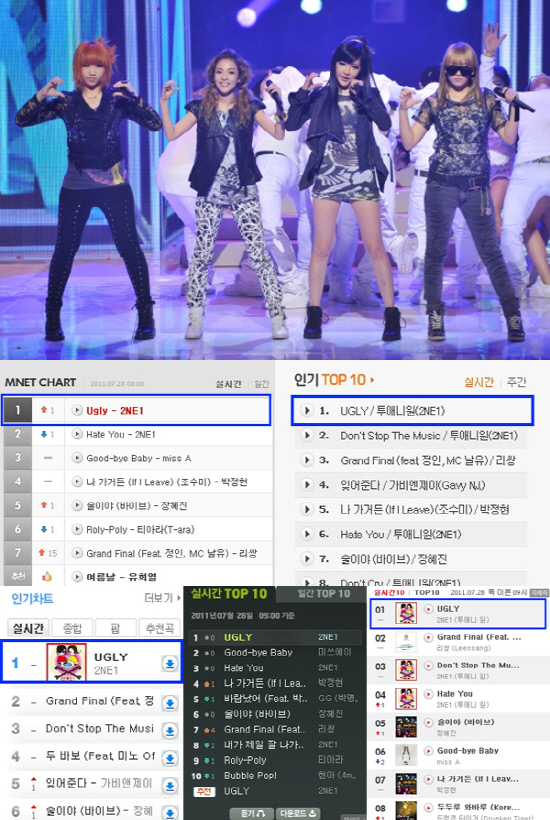 “Ugly” shot to the top of the charts and reached an “All Kill” with reports saying that 2NE1 has made a new record by having all of their last five consecutive releases (Bom‘s “Baby Don’t Cry, “Lonely,” “I Am The Best,” “Hate You,” and “Ugly”) reaching “All Kill” status. Can’t wait to see a live performance of the song- or are they not doing that for “Ugly?” No matter what anyone says, 2NE1 is definitely a force to be reckoned with.