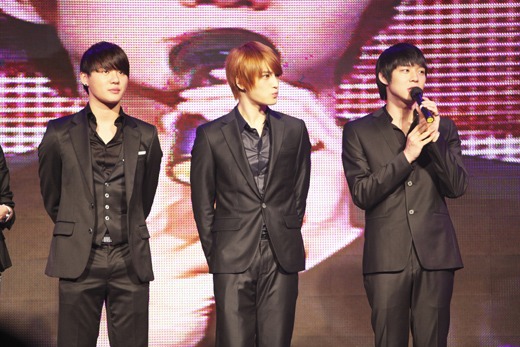 Y’all know the drill by now. JYJ gets a broadcasting offer, people get excited, offer gets pulled out from under them at the last minute, everyone’s pissed. Lather, rinse, and repeat.

The latest saga in the JYJ broadcasting debacle involves the cancellation of JYJ’s appearance on KBS’ “New Seven Wonders” broadcast. In May, JYJ was chosen as honorary ambassadors to globaly promote Jeju Island. Jeju was recently nominated as one of 28 final candidates for the world’s New Seven Wonders, and KBS planned a broadcast to help promote the island’s candidacy, with JYJ as the headliner.

However, according to an announcement released by CJeS Entertainment on July 16th, the trio’s slot on the show was cancelled for indefinite reasons. A day later, KBS announced that JYJ would be replaced by f(x) and SNSD, who were supposedly the original artists slated for the show. According to KBS, SNSD and f(x)’s schedules originally could not accomodate the broadcast, but due to ‘unforeseen changes,’ they would now be able to appear.

If that sounds as sketch to you as it does to me, then that’s because it probably is.

Just today, KBS released another announcement further clarifying the reasons for the change. According to the decision made by the producers, SNSD and f(x) were chosen for their ‘global presence.’ They then went on to say that because of the global significance of Jeju’s candidacy, as well as the fact that the program would be broadcast worldwide through KBS World, it would be more effective to broadcast stars with notable overseas influence. According to KBS, SNSD and f(x) were the girls for the job, as they had recently “toured” Europe.

Therefore, SNSD and f(x) are in, JYJ is out, and fans are sharpening up their pitchforks. 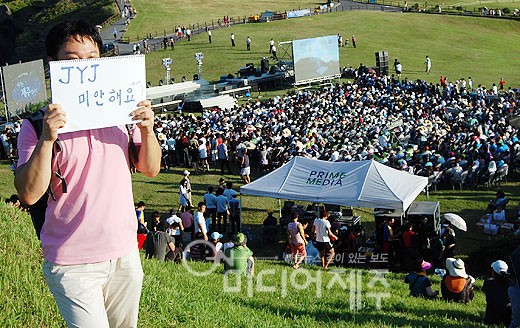 The fans’ anger is understandable – this is far from the first time JYJ’s been barred from a broadcast on unreasonable grounds. On top of that, the fact that JYJ’s being replaced by two insanely popular groups (from SM, no less) is bound to stir up tension between the fandoms. It’s an uncomfortable situation for everyone involved, and I can’t help but think: Wouldn’t things be so much better if SM would just drop their purported stranglehold on KBS for one moment and let JYJ perform just one itty-bitty song?

Well, as a fan, it’d definitely let my heart rest a little easier to see JYJ regain their broadcasting rights. But let’s face it: Is there a single broadcasting company out there with the balls to let JYJ perform on their station? Honestly, if I were KBS, I wouldn’t touch JYJ with a ten-foot pole.

No matter how you look at it, these three guys are walking disasters to just about anyone in the K-pop industry. Considering JYJ’s streak of bad luck when it comes to broadcast offers, it’s pretty obvious that SM’s putting implicit pressure on these broadcasting companies to not let JYJ perform. Why SM continues to hound JYJ even after their emancipation from the company is a subject for another discussion. But it’s also not to say that KBS is just doing whatever makes SM happy. 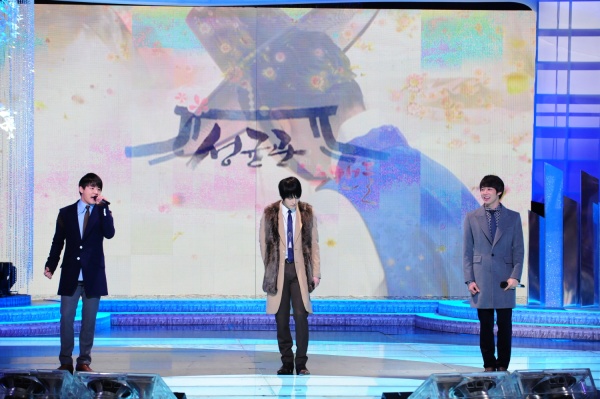 It’s true: letting JYJ perform on TV almost guarantees high ratings – JYJ is practically a nonexistent creature on performance broadcasts nowadays, and should the occasion arise, tons people are bound to watch JYJ on TV if only for the drama behind the ordeal. But JYJ hasn’t been able to function normally as performers for so long that a stigma has been cast around the group. When JYJ sued SM, they weren’t just breaking out of the company – they were breaking out of the entire K-pop system. They questioned and criticized this well-established system and ultimately chose to go on their own path. And that path is a rocky one: their management company is super sketchy, their performance track record this past year hasn’t been too hot, they got into trouble with the largest record company in Japan, and general public opinions about JYJ are all over the place. JYJ is a controversial group, and when you’re talking about a system with an exterior as squeaky-clean as that of K-pop, controversy is never a good thing.

In a way, they were like three kids who ran away from home, returned with piercings and tattoos, and now the entire village won’t let them back in. Instead, they just sit back and ‘tsk’ at those ‘good kids gone bad.’

To be honest, if I were given the choice between broadcasting JYJ and broadcasting SNSD, I’d pick SNSD any day, external pressure or not. While KBS was a bit stupid to cite the Paris concert as the sole reason for SNSD’s global success, I’d venture to say that at this time, SNSD is more popular on a global scale than JYJ. Add the amount of red tape surrounding the JYJ situation and it’s obvious why KBS would replace JYJ with SNSD and f(x). Who would you invite to your house for tea: the nice, well-behaved girls next door, or the three rogues with a history of shaking things up?

Look, just about everyone in the entertainment industry is scared to work with JYJ right now. The risk JYJ carries with them is just too big. SM definitely has an overarching influence above the entire K-pop industry, which is perhaps the primary cause for JYJ’s inability to get broadcasted. But it’s not as if these broadcasting companies aren’t considering the risks for themselves. It goes without saying that JYJ certainly has the talent, skill, and popularity to perform on television. But until their status in the entertainment sphere stabilizes to a point where people aren’t scared of them anymore, JYJ won’t have a real place on the K-pop stage. What sucks the most, though, is that JYJ’s stability within the K-pop world doesn’t rest in their own hands – it rests in everyone else’s. 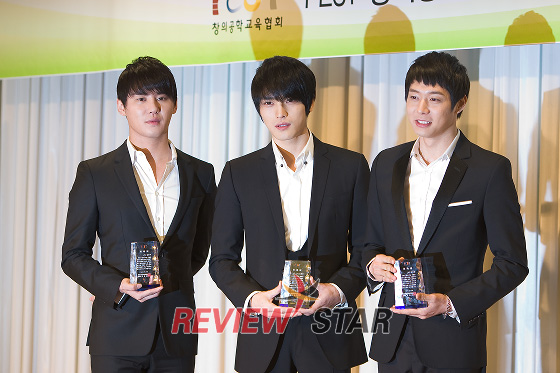 And one last thing: People are vilifying KBS left and right for constantly breaking their promises to let JYJ perform on their station. But the thing is, KBS is the only network that has even considered letting JYJ on their airwaves. While KBS is receiving hatred left and right for cockblocking JYJ not once, but twice…what’s MBC and SBS doing? It’s not that these two networks don’t have any interest or opportunity in broadcasting JYJ – it’s because they don’t have the guts. No one does. But until a well-established name decides to take a chance with JYJ, nothing is ever going to change.