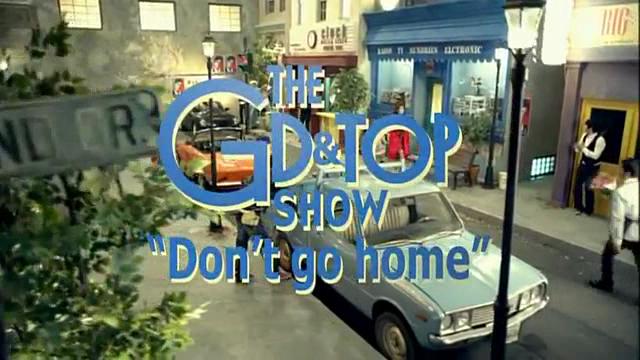 GD& TOP‘s full MV for their song “Don’t Go Home” can now finally be seen by fans in all its glory.  Fans have uploaded the MV on various channels which was taken from Big Bang‘s 2011 Big Show DVD.  Previously, fans that didn’t attend the concert were only able to see the MV via fan cams of the concert and some behind the scenes footage of the MV shoot.

For those familiar with the duo’s live performances of the song, the MV will look very familiar.  “Don’t Go Home” is a playfully sweet song of seduction with T.O.P. and the other males in the MV conspiring to help G-Dragon convince his girl to not go home because you know it’s already late, and after 12- so she’s already going home tomorrow, and it could be unsafe for her…  uh, huh.  Check out the MV, here.

Ah, so “Don’t Go Home” was the the lead in to “Baby Goodnight,” good one.  “Don’t Go Home” is one of my fave songs off the GD&TOP album (along with “Baby Good Night”) because it has a great groovable beat and it’s just so smooth.  I’m glad that we’re finally able to see a clean cut of the MV it’s retro-sweet, probably using the retro concept to convey the innocence of a boy trying to woo his girl.

The word is that YGE didn’t release the MV officially due to the banning of the song on several Korean broadcasting channels.  Ah, YG have you not learned anything yet, that’s what YouTube is for.  We fans wouldn’t have had to wait so many months for this (by the way, I’d watch the MV asap, just in case you know) if you had just did some big release on YouTube.

I can kind of see why the song was banned it is kind of misleading, if you weren’t paying much attention you would just think the song is about a boy wooing his girl because of the sweetness of the music.  But, because of the smoothness of the song also it’s not surprising that when you do pay attention to the lyrics it is all about seducing the girl into staying the night although in a much more subtle way than say “Baby Goodnight.”

Lastly, the release (although unofficial) of the MV was a nice unexpected treat for fans of Big Bang as the group’s activities are in a somewhat state of limbo with Daesung awaiting the outcome of his accident charges.  It had been reported that Daesung would not be doing any activities at least until the end of the year as he awaits the outcome.  The one good thing that could come out of Daesung not promoting in this period is if he found the time to work on his solo album, although he might not be in quite the right frame of mind for that.