Ladies' Code Charm Their Way Back Into the "Galaxy" 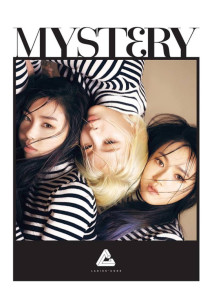 Of all the comebacks in K-pop, this one possibly elicited the most responses of trepidation. It’s been two years since Ladies’ Code experienced a car accident that resulted in the heartbreaking loss of members EunB and RiSe. Fans mourned for the girls worldwide and sent messages of support to the surviving members Zuny, Sojung, and Ashley. With all that happened, it’s understandable that the main concern was over the mentality of Ladies’ Code when it was announced they would return as a trio. Were they ready? Were fans ready to move on together with them?

With “Galaxy” as the title track from their single album Myst3ry, the moment of truth finally arrived for Ladies’ Code. They’re not the first group to return from a long hiatus with a lot riding on their shoulders. 2pm, f(x), Big Bang, B.A.P, Rania, and Block B are just a few names who’ve walked this path before them. Some managed to surprise fans with positive comebacks that displayed the staying power of the group, but others drew mixed reviews because their hiatus built up high expectations that weren’t met.

Regardless of past circumstances, I simply wanted “Galaxy” to be good. For me, Ladies’ Code has always been one of the better girl groups vocally, so I understood the sentiment of wanting people to acknowledge their talents over their tragedy. They needed a song that properly showcased their beautiful voices to remind people that they are still great singers.

The main theme of this video centralizes on emphasizing Ladies’ Code as a trio. We’re bombarded with images of everything related to the number three — triangles, numbers, and of course, the members themselves. With so much effort poured into reinforcing this not-so-subliminal reminder that Ladies’ Code is a trio now, it was a bit jarring to see scenes involving two backup dancers performing with the girls in a darkened room. A large triangle decorated the background, but the imagery of five women dancing evoked memories of when the group included EunB and RiSe.

Could this have been their way of paying a small tribute to them? If it was, I appreciate the gesture on some level because it suggests the idea that despite continuing as a trio, they haven’t forgotten their deceased members. However, it made me sigh being reminded that EunB and RiSe are gone physically, but I get the sentimental value of expressing how they’re always with the group in spirit.

In the song, Ladies’ Code seek a lover who will send their emotions beyond the stratosphere. They’re tired of being grounded in their feelings and want someone to release them from the repressive grasp of physics.

I could almost reach there
My heart is nervous, O2 is dropping
My attraction to you is unstoppable
I think I’ve caught a glimpse of you before, I suddenly remember
In an endless darkness, I found a ray of light

The lyrics are simple, as to be expected in a love song, but the message is clear. My geeky side loves the use of “O2 is dropping” in place of saying “You take my breathe away.” I love tiny details that go beyond the typical “Roses are red, violets are blue” cliches we often hear in love songs.

“Galaxy” reminds me a bit of Zero 7 stylistically with its blend of jazzy vocals with a dash of R&B and synth pop. Every member sounds wonderful in the harmonies, and there is an even line distribution that highlights their individual voices beautifully. The instrumental production is clean yet methodical, leaving nothing to chance in taking what some may consider a safe sound. I’m fine with it because their voices are so lovely that it’s not necessary to insert jarring tempo changes that draw attention away from their singing. This is what music should sound like when you have members who can harmonize. 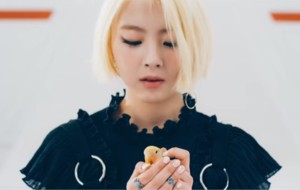 Going back to the visuals in the MV, I love the cinematography. Does that make this video astounding just because Ladies’ Code look stunning in each frame? I’m split on this. Yes, the girls deserve to be shown in the most flattering way possible, but then again, it doesn’t contribute anything to the meaning of the song itself. It’s not a huge negative, but I would’ve appreciated some connection to the lyrics.

If anything, some parts confused me completely, such as the scissors being shown repeatedly. I suppose they could represent disconnection since they’re used to separate things in reality, but that’s never clarified in the video. I was also thrown off by why Zuny held a baby chick, and why Ashley kept curling her frosted lash. Looks great but makes absolutely no sense in relation to the song.

While I can take or leave the video itself, the song “Galaxy” served its purpose in showcasing the talents of Ladies’ Code. The group sounds just as lovely as ever, which is a welcomed relief since I worried about the vocal dynamics changing drastically. Going from a quintet to a trio isn’t an easy feat, so I applaud the effort applied here to make this song work for Ladies’ Code. Although things will never be the same without EunB or RiSe, it’s good to know that Ashley, Zuny, and Sojung are strong enough together to continue making great music.