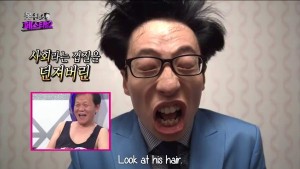 You’re probably thinking: ‘it’s already 2016 and yet there are still people — rather, institutions — that very blatantly bank on the physical attractiveness (or the lack thereof) of actual human beings.’ Well in an image and beauty conscious society such as South Korea, outward appearances are pretty much as important as what you can offer on the inside. It is on this premise that the not-so attractive people are seemingly looked down upon and hence in the Korean entertainment industry are usually granted very specific and almost restrictive roles, particularly that of comedians. Well, in Infinity Challenge’s three-part Ugly Friend Festival, the gang was certainly about to turn Korea’s intense beauty standards around by actually celebrating what really matters — one’s personality and individual charms. Or did they?

After Jack Black’s successful and utterly hilarious visit at the MuDo set, Muhan Dojeon or Infinity Challenge as it is more globally known, is only kicking off more crazy and chaos in their second Ugly Friend Festival — a festival which was already held four years ago and has somehow become an unspoken tradition in the Infinity Challenge community. From episode 466 (the episode which followed immediately after Jack Black’s guest appearance in the show) up until episode 468, the MuDo gang invited and ultimately welcomed well-known actors, musicians, athletes, TV personalities, and even a poet, all of whom have been at the receiving end of countless jests about their physical appearances. 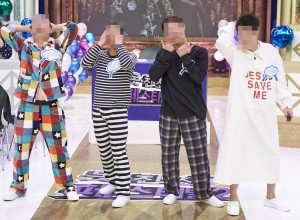 Maybe from a Western perspective, the idea of an Ugly Friend Festival might sound utterly ridiculous, but there’s actually some sort of satirical essence to it that appears every now and then. Kicking off the festivities with an elimination round consisting of 64, hand-picked ugly candidates — which were then narrowed down to 16 — the entire celebration of ugliness was built on South Korea’s brand of comedy and variety: kind of shallow and ridiculously over-the-top with a hint of their signature slapstick-like sense of humor.

Once the 16 candidates were chosen, the show’s staff personally delivered the invitations to the 16 chosen ones. After scanning the QR codes that were printed on each of the invitations, each of the candidates were greeted by a ridiculous video starring who else but the MuDo MCs. The funny video consisted of bashing the industry’s more handsome faces all the while empowering the ‘ugly people’ of Korean showbiz, calling them ‘essential in making people laugh’ and in ‘bringing variety to the industry.’ 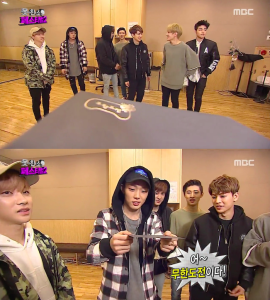 Some candidates — and by candidates, meaning rookie idol Bobby of iKON who was expectantly joyful to become a part of the legendary festivities — were ecstatic about the invitation. However, others (practically the other 15 invitees) were in sheer denial and had the most amusing reactions to being chosen. Eventually, the following celebrities made it to the festival: Jo Se-ho, Defconn, Kim Soo-yong, Ji Suk-jin, Woo Hyeon, Kim Hee-won, Bobby, Ha Sang-wook, Kim Tae-jin, Lee Chun-soo, Byun Jin-Seop, Lee Bong-ju.

From an outrageous Victoria Secret-esque loungewear fashion show to a funny segment of ‘ugly assessment’ that involved a comedic scrutiny of the candidates’ slow-motion, close-up shots, the festival was a humorously disjointed mess of random games and activities with an almost aimless purpose. Initially, one would think that the Ugly Friend Festival was nothing more than just another laugh-fest gimmick — a showcasing of what would happen if you gather the entertainment industry’s least attractive people. 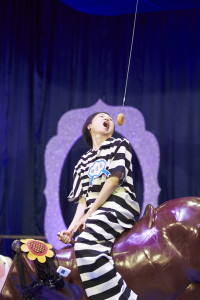 Of course, with the set of challenges such as a ridiculous mechanical bull ride game involving donuts dangling from the ceiling, it was able to live up to the expectation of being a festival made to highlight the tragic stereotype that ‘ugly people’ are merely comedic caricatures of society. To an extent, this insight raises the question of whether or not as an audience, are we really meant to laugh at them or with them? What’s the genuine intent of such a celebration?

As the festival progresses, the candidates’ perspective on the entire celebration shifts on occasion. While they are consistently adamant about being handsome and somehow undeserving of becoming a part of the Ugly Friend Festival, there were times when they would embrace it, but mostly because they would allow their competitive and childish demeanor to seep through during the most heated moments of the festival.

The last episode of the Ugly Friend Festival proved to be the most insightful one as it was able to really establish the purpose of the celebration. Although the obvious hunch at the beginning has always been that the festival was meant to empower the not-so attractive parts of ourselves thereby encouraging us to enjoy life and embrace our individual charms, sad to say that these sentiments were often lost at the cost of comedy and humor. 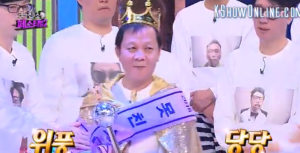 Infinity Challenge’s Ugly Friend Festival concluded with a quick awarding ceremony for the Most Charming Man which was done via votation process. Ultimately, Woo Hye-on won the award and his heartfelt thank you speech about feeling confident in oneself was probably one of the highlights of the entire festival. His concluding remarks — which pretty much sums up everything about the festival — were as follows: “Although we are not handsome, there is nothing ugly about us. We each have our own strengths.” 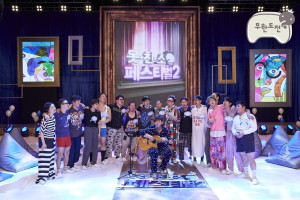 While the case of whether the show was able to genuinely empower anyone or instead further the sad assumption that not-so attractive individuals are meant to be mere comedic reliefs of the entertainment industry and the butt of every insensitive joke in our daily living is yet to be directly answered. However, one cannot deny that the festival was able to somehow remind us of that cheesy yet forever significant message of truly embracing one’s flaws and understanding that they will not limit you. Sure, Infinity Challenge’s Ugly Friend Festival might have sounded problematic (and it probably is and will continue to be), but it’s definitely taking a step in the right direction.