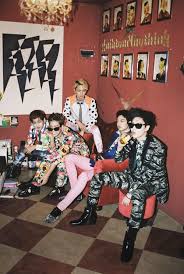 We are all familiar with the deluge of music K-pop fans experience: albums, mini-albums, repackages, digital singles, etc. With so much quantity, quality is certain to suffer, and the coveted combo of cohesivity and creativity throughout an entire album is a difficult achievement. However, 2013 was a stellar year for both full-lengths and minis, as is evident by the sheer number of albums you readers voted for in our polls; there were very close votes among multiple albums, not just the expected two or three.

The winners have received prior coverage for their musical prowess, but what also determines a “Best of” album is how well it can stand the test of time. While we don’t really know how these albums will hold up, especially in K-pop where music dissolves as fast as cotton candy, they all have qualities that transcend genre conventions, making them albums that could follow a person for the rest of their life.

Soundtrack of Your Life: SHINee, Misconceptions of Me. SHINee’s second in their “Misconceptions” series took first place for Favorite Album. Though “Why So Serious?” wasn’t everybody’s jam, the other tracks hit the perfect note. From dangerously seductive songs, to flawless harmonizing, right down to masterful mixing, this album raises the bar not only through high-quality production, but also because the songs fit together in a thoughtful, near-supernatural concept.

It’s rare that a K-pop album delivers both in music and concept, and the resulting dynamism can apply to a myriad of life situations: anytime you meet that special someone, “Like A Fire” will run through your head. When you’re stressed about work and can’t sleep, you’ll pop in “Sleepless Night.” When you hit that mid-life crisis and plan your first big bank heist, you’ll listen to “Evil” to get pumped up. Okay, maybe Misconceptions of Me works better as a soundtrack to a Fitzgerald novel, but believe me: this album, combined with the other SHINee winners (Misconceptions of You and Everybody), will provide you with tunes for many road trips down the line.

(Note: Due to our poll guidelines for what constituted a mini-album, Everybody was placed in the full-length category though it was promoted as a mini-album. Either way, you guys liked it.)

Artistic Inspiration: f(x), Pink Tape. Second place went to f(x). Infectious to the nth degree, Pink Tape takes listeners through an admittedly expected journey of love lyrics-wise, yet breaks down and pulls apart the musical elements, bringing interest to every track. The girls’ light voices play well with the overall innocent feel, and we (finally!) get plenty of Amber’s singing voice for a darker balance. The album’s catchiness makes it infinitely danceable, but the mixing gives variety and depth to f(x)’s signature electronic style. It’s got the right blend of creativity and replayability that will give you a boost during those long, artistic all-nighters.

That Dinner Party Album: IU, Modern Times. Next was IU’s release, a personal favorite of mine this year. With its jazzy, big band sound, IU provided a breath of fresh air to the K-pop scene.

Modern Times and its title “Red Shoes” was a departure from IU’s previous work, through experimentation with different music styles and collaborations with a multitude of artists, including jazz guitarist Park Ju-won. The album’s real strength is how seamlessly the tracks flow together, making it that perfect album to sneak in during dinner parties — when you’re old enough to have legit dinner parties, this is.

Another album deserving mention is Jaejoong’s WWW, or what I like to call That Rock Album You’ll Torture Your Kids With. Sure, it’s cool now, but wait until you’re in the car with your kids and turn on WWW for the 1000th time. They visibly cringe as you give your oft-repeated spiel on how the album ingeniously straddles the line between rock and pop, and how its an allegory for Jaejoong’s complicated soul, or somesuch. Cue eye-rolling from the kids, but you can bet they’ll download it later. However, you won’t even have to convince them about the next album, Exo’s XOXO (repackage included), which stands apart in the glow of its seemingly effortless boyband perfection.

The votes were close for Favorite Mini-Album, but squeaking its way to first place was Seungri’s Let’s Talk About Love, a.k.a. The Mature Clubbin’ Album. Seungri may be Big Bang’s maknae, but this mini-album showed his mature side; he grows up as his audience grows up.

Subtle and sexy, Let’s Talk About Love highlights Seungri’s smooth voice and sensuality. It’s the K-pop album that knows restraint, that isn’t overly sweet or aggressive, and belies the age of its singer. It’s that album you can play throughout your 20s, 30s, and possibly 40s, if you’re still trying to go to clubs at that point. After that, it becomes The Mature Wine Bar Album for maximum replayability.

Surprise Album for the Aged: Block B, Very Good. A very close second for Favorite Mini was Block B’s epic comeback. While 2012’s Blockbuster proved that Block B could put out a solid album, Very Good showed how much craftsmanship they put into every song. Discounting the instrumental, the mini is only four tracks long, but each packs a punch. With no big thematic or musical concept, the cohesion comes from how straight-up good each track is. Though one could imagine shelving the group’s in-your-face attitude in later years, it’ll swing back around when you’re 90, yelling at kids to get off your lawn, and loving the fact that you can do whatever you want. Just make sure to turn off the hearing aid before cranking the volume.

Other 2013 minis that caught your attention were Exo’s Miracles in December — guaranteed to turn into That Christmas Album You Play to Death Every Year until your significant other hides it — and Nell’s Escaping Gravity, where careful composition and meaningful lyrics defy genre classifications, making it simply a great mini that will keep you company for years to come.