Nell's "Escaping Gravity" and "The Road Not Taken" 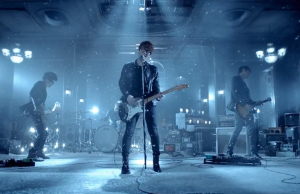 Nell has faced a lot of comparisons with Coldplay, some quite merited, some not so much; however, I think the most apt way to verbalize my feelings for Escaping Gravity would be to call it “Nell’s Mylo Xyloto” because Nell finds itself at a musical crossroads with their recent album, much like Coldplay did with the release of Mylo Xyloto. That said, I’d much prefer to explore Nell’s new work a tad abstractly under a more “poetic” lens, appropriate for a group as introspective as Nell is. More specifically, via a very famous and oft misunderstood poem: Robert Frost‘s “The Road Not Taken.”

Unfortunately, far too many teachers in world who decide to impart this particular poem upon their students teach it all wrong. (Then again, don’t take my word as gospel, as this is poetry, and one is free to make different yet textually supported interpretations.) To interpret poem to mean that “you should become your own person without the pressure of others around you” frankly sounds stupid in light of the depth his other works. It’s an approach that comes off as a childish fantasy, as I don’t think a pragmatic man like Robert Frost would ever write something so corny and transparent. Nevertheless, many teachers teach this poem this way, encouraging their young, wide-eyed students to act according to societal ideals. In fact, I’ve come across many of these inspirational posters in my schooling days that feature this line:

I took the one less traveled by,
And that has made all the difference.

Well…that is great and all, but lest you’ve forgotten Inspirational Poster Manufacturers, this poem is called “The Road Not Taken” not “The Road Less Taken,” “The Road Least Frequently Travessed” or “The Pathway That Has The Most Weeds.” And that’s not even to mention that you’ve just disregarded an entire poem for a single couplet.

This really does “make all the difference” to the interpretation of the poem, because sin context, one can make up literally any meaning out of any line! Mr. Frost, contrary to popular opinion, actually finds his choice of road insignificant (the proof for this has to do with the multiple indications that both roads are nearly the same), or possibly even laments the fact he ended up taking the road he took (the “sigh” when retelling the story), and surmises that as an old man, he’ll attempt make whatever that decision is grandiose (the delivery of “I, I took the one less travelled by”), as many an old man have done. 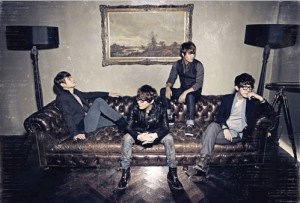 So what does any of this have to do with Nell? Well, Nell is coming to a musical fork in the road, wherein both paths are equally welcoming, and “equally worn.” In essence, the choice to pursue an electronic and synth heavy sound isn’t bad; it strays from the “indie” minimalism that they were pursuing.  This unfortunately beckons people to make groundless assumptions that Nell had succumbed to inferior tastes and abandoned the artistry from Slip Away, though that really isn’t the case. What they were, and what they choose to be going forward are both equally valid paths to take. Any group can and should evolve in sound; the only requirement is for there to be enough familiarity left such that I can tell myself, “Yes, this is a Nell song,” which the group does accomplish through Escaping Gravity.

“Boy-X” dips itself head first, feet last, into the electronica and synths that pervade the album.  The synths are so heavy that the vocals take second fiddle in the song. “Boy-X” could be marketed as innovative, but there is something uncharacteristically brash about the construction of “Boy-X.” Be it the raspy and processed vocals, the sandpaper-like synth loop, or the tinny overtones of the drums, this song is certainly made to push the abrasive line to its limits.  Surprisingly enough, “Boy-X” does straddle the line relatively successfully, giving character and dimension to the song by means of rough edges. It’s only fitting, given the snarky commentary from the lyrics.

“Ocean of Light” backs away from the experimentalism of “Boy-X” and takes on mainstream strengths, which makes sense, as this is the title track. Nell brings in the catchy synth hook from the beginning, then layers guitar and drums till the song explodes at the pre-chorus.  once the chorus is over, the song partially strips away all the instrumental and lets the whole song build up all over again. What’s interesting about this song is that the driving force is entirely in the hands of the instrumental. (Which is something that’s quickly turning into a pattern.) The vocals have next to no modulation; only raising and lowering to the volume and intensity of the instrumental. It makes for an intriguing listen because the listener focuses on the development of the instrumental and background vocals and lets the actual vocal line become a pseudo-base line. I actually didn’t like “Ocean of Light” too much at first listen, but after taking time to follow the song’s different elements from beginning to end, it’s become a favorite.

I was surprised at how much things mellow out at “Perfect,” but this is exactly what I love about the song. We finally get back to vocals becoming a prominent feature, but that’s not to say that instrumental lost any ground. The piano loop is crisp, providing unity to all the synth, guitar, and drum elements that flow in and out of the song. Though in the end, “Perfect” gets a bit lost in its own repetition, this is really a song that lets me “Escape Gravity” in a non-traditional way. The first two songs send you soaring, but “Perfect” lets you fall forever through empty space, pulled by absolutely nothing.

“Burn” feels like an ironic name, because the song sounds nothing like the feeling of burning. This is when you pull out the lyrics and find out what the song really means and find out that song is to covey the feeling of stripping off everything one has hid himself behind. This is the point in which I really appreciate the direction of sound Nell takes with this album. The ethereal vibe that comes from the synths convey the emotion of freedom better than their minimalist sound in Slip Away or even the works before then did. I can envision myself throwing away the armor, throwing away the mask, running through the rain to face my fears—even a willingness to run into the fire. This may not be the case for everyone, but it was a vibe that I got out of the song.

To close out the album with “Haven” was a stroke of genius (ignoring “Walk Out.”). This is my favorite song in the album, no questions asked. Despite the fact that it seems like they’re using the same chords and synth loop through half the songs on this album, the execution of “Haven” is nothing less of phenomenal.  I could feel the wind blowing against my face, my body falling into the ocean, the weight of the water on top of me, the sense of exhilaration and desperation. Once I read the lyrics, the song came to life as the elements I heard pieced into the complete story: 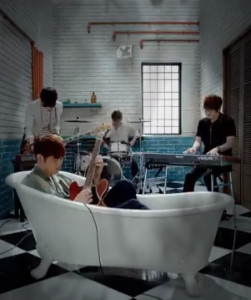 I know it’s a dark cave and even though it’s far from heaven
Maybe this could be my haven.

I know it hurts you when I fucking shiver
Well, trust me I was such a strong believer
But what’s the point of searching for that halo
My eyes are blinded and my heart is shallow.

It’s getting worse and worse as I think deeper
It’s just like staring at a burning river
Well, now it’s time stop. Just pull the trigger
I want to end it all. I wanted over.

Most songs you hear in the pop world take on this particular structure: intro, verse prechorus, chorus, verse, prechorus, chorus, bridge, chorus, conclusion. “Haven” does none of that. Instead, it becomes a musical representation of the lyrics. The song starts in one location and ends up in another. You follow the narrator through his emotions; from resignation, through frantic desperation, to hopelessness and finality, both in words and though music. It’s an experience better heard than said.

With “Haven” as the last track, “Walk Out.” becomes a powerful outro. After going though 5 minutes and 27 seconds of emotional trauma and suicidal thoughts, only to hear the gun go off, makes “Walk Out.” extremely painful to listen to. It’s like attending a funeral; haunted by the memories. “Walk Out.” pulls from the musical themes scattered through the album, as a somber reminder of what you just spent 25 minutes going through. 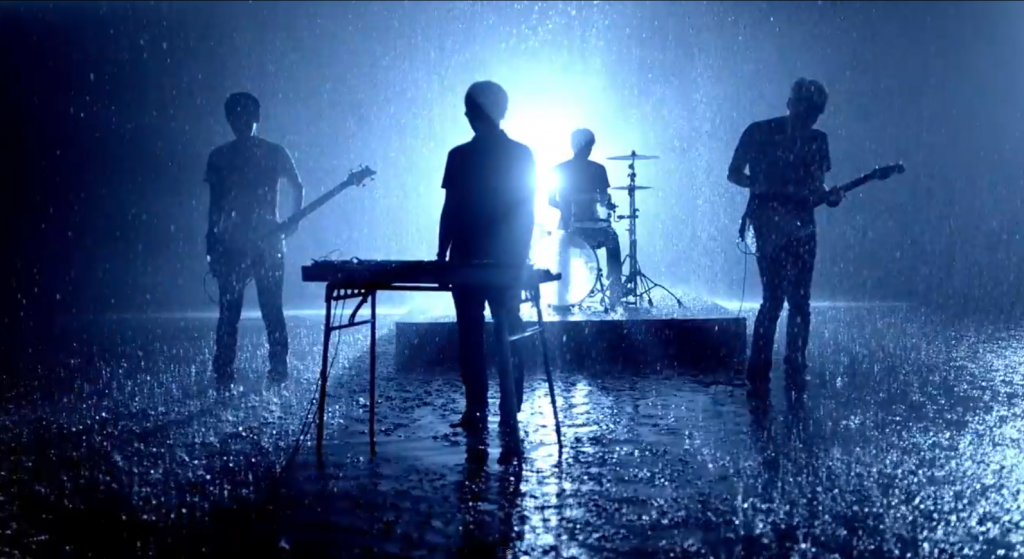 Even with a slight change in overall sound, Nell stays grounded to the psychedelic alternative-rock that made them famous. I don’t even think that the modern take is even all that much of a change, since the musical quality is still exceptional. Much like “The Road Not Taken,” Escaping Gravity will probably be assessed from the vantage point of  a few musical tropes, ignoring the holistic experience. Nell has always been consistent with one thing from their first album to Escaping Gravity: expressing feelings, be it happiness, sadness, frustration or exaltation. Listening to Nell can be exhausting, their music is so heavy with emotion that it can be overwhelming, even if that emotion is supposed to be freeing. Nevertheless, we’ll come back again and again for the emotional turmoil, for Nell expresses it with beauty and refinement.

In the end, Nell chose a path. Whether that path had a few more weeds or couple less, whether it’s musically sparse or rich, it’s really all the same. Frost came to the conclusion that your choices in life are as significant as you make them out to be, and that’s very much a truth. Nell stood at the fork of the wood, and took what interested them at the moment. Most of all, Nell has chosen to make their musical choices something of little importance and to simply embody the style they want at whatever time they desire. Having modern and mainstream flair in Escaping Gravity doesn’t mean that the music isn’t as introspective and honest—”Haven” is enough to see that.

In all honesty, I don’t know if Nell is going to regret their choice when they’re old and grey, and tell their grandchildren that “they took the road less travelled by,” with a sigh. Nevertheless, it makes little difference to me. Escaping Gravity is sincere with its efforts, and that’s all that matters. Why worry about “The Road Not Taken” when you can embrace the one they did?