Last round’s competition was fierce with many close battles and surprising upsets. But before we recap those tight races and dive into this round’s matches, let’s take a look at our current leaderboard for those who entered our Pick ‘Em contest.

Only one entrant still has a perfect bracket, with all eight of their regional finalists still in the race. Those tied for second place have seven out of eight regional finalists still in play with the incorrect entry labelled in red. We also included those tied for third because the volatile nature of March Madness means they still have a shot at overtaking second place, and in some cases, first.

The volatile nature of this year’s March Madness is perfectly demonstrated by the ousting of Jungkook (BTS). Jungkook won the male visual category last year, only to meet his demise to the eventual winner, Tzuyu (Twice). Going into March Madness this year, he was a fan favorite to continue his visual dominance but fifth seed, Eunwoo (Astro), has surprisingly taken over. Time will tell if Eunwoo continues his ascent, up against Taeyong (NCT) in this next round of voting.

An extremely close battle occurred between RM (BTS) vs Bobby (iKon) last round with the two being neck and neck for much of the voting. At one point, RM fell behind Bobby in votes, but in the last moments, prevailed by only 5 votes. This just goes to show how important your vote is. You decide who wins and loses in Seoulbeats’ March Madness! 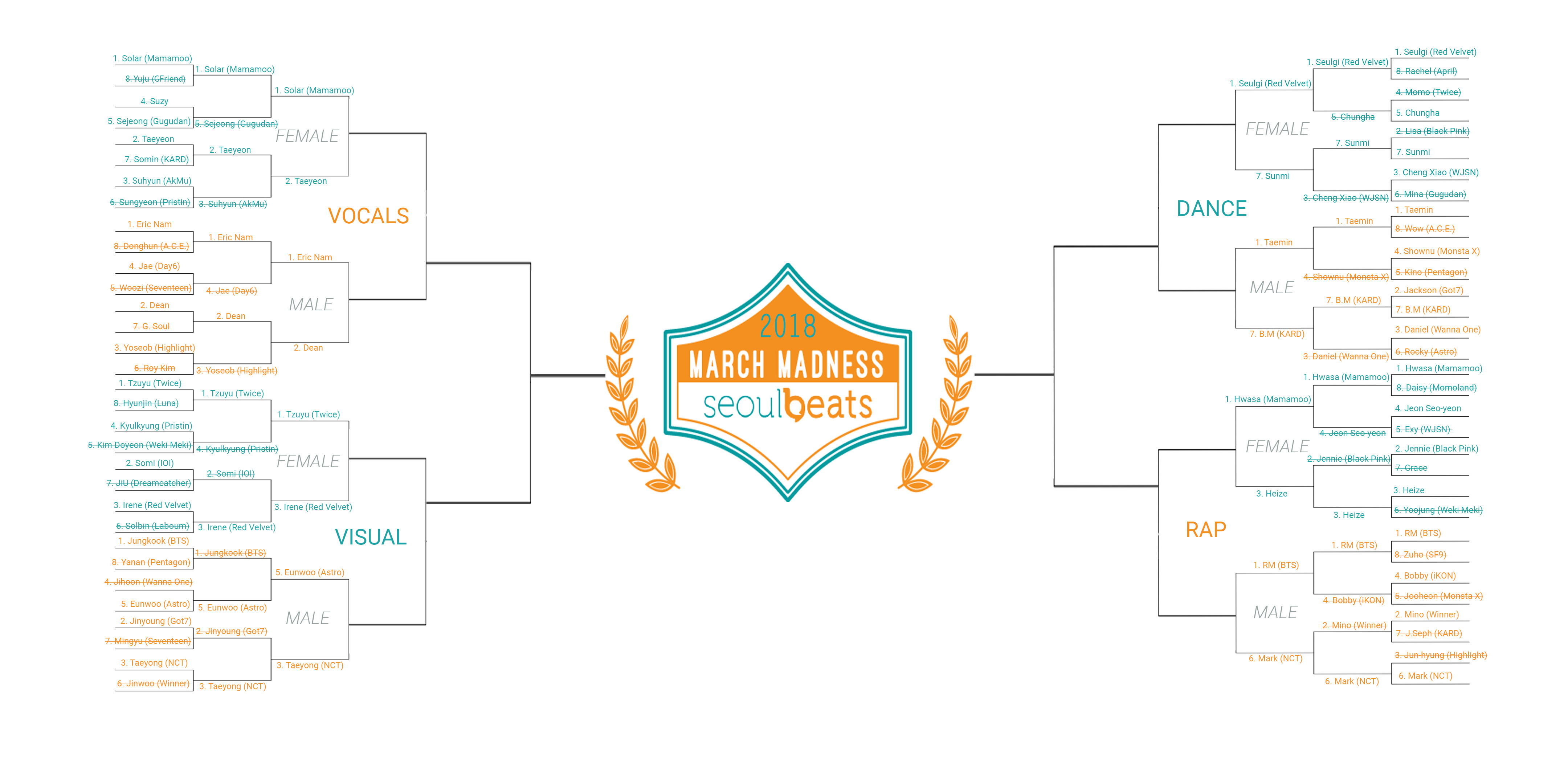 Our Sweet 16 round brings with it many interesting matchups. Here’s what we’re keeping our eyes on:

Taeyeon vs Solar (Mamamoo) — Taeyeon has proven to be a force to be reckoned with this year but Solar has held her own extremely well. This matchup will determine whether Solar’s landslide wins have been due to her true talent and popularity or if they have been due to facing weaker opponents.

Eunwoo (Astro) vs Taeyong (NCT) — Eunwoo has been a delightful surprise this year, knocking out Jungkook as previously mentioned. But will the fans who have supported him thus far turn out to take down Taeyong? Or will Taeyong continue his domination?

Taemin vs B.M (KARD) — Taemin’s ascent has been expected but B.M’s, less so. Ranked as a lowly seventh seed, B.M notably eliminated the second and third seeds in the dance competition (Jackson and Daniel, respectively).

Seulgi (Red Velvet) vs Sunmi — Like B.M, Sunmi has risen from the depths of the seventh seed to take down the second and third female dance seeds (Lisa and Cheng Xiao). But will her momentum be enough to eliminate fan favorite (and first seed) Seulgi? Or will she, too, be another casualty of Seulgi’s quest to win March Madness?

This round of voting ends Tuesday, March 20 at 11:59PM EST. Be sure to get your votes in and comment on your favorite matchups below!