March has rolled around once again and you know what that means: March Madness!

For those of you unfamiliar with how it works, it’s really simple. The bracket below determines the matchups that will take place starting Monday, March 12. The first round will begin with 64 contestants in 32 matchups. Each matchup will consist of a poll which our readers will vote on to determine who will advance to the next round. As each round progresses, there will be fewer and fewer contestants. The last individual to remain standing will be crowned our 2017 March Madness Champion! 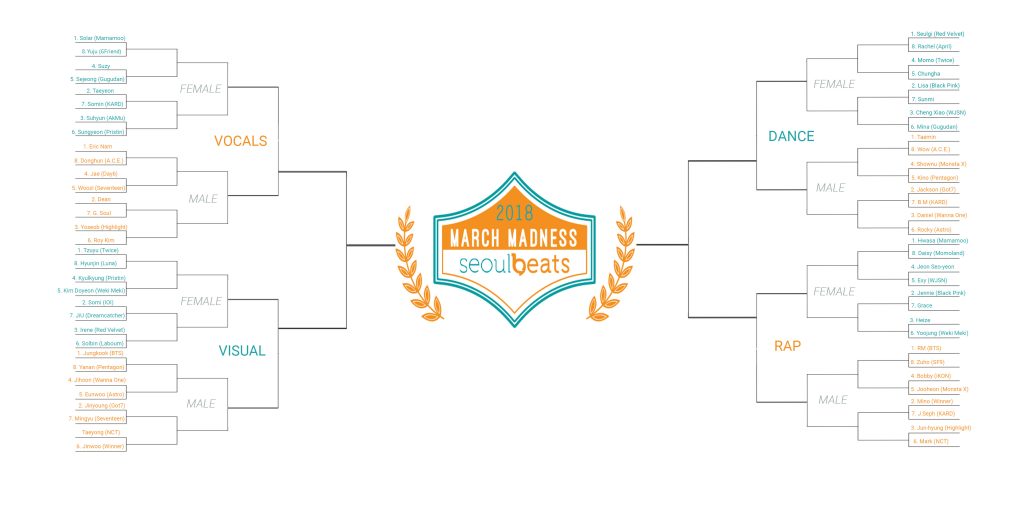 This year, we’ve kept the same bracket categories — Vocal, Rap, Dance, and Visual — and most of the same rules; only a maximum of two members per group and only artists who have debuted in 2013 or later. This year’s catch: artists with solo debuts in the past five years are also eligible. This means that artists who would have been ineligible as part of their group are now eligible as soloists, for example Taeyeon and Taemin.

Seeding is determined based on how well contestants did in prior years’ contests and how our administrators felt they would do this year based on their popularity level and talent in their assigned category. For instance, Tzuyu won last year’s contest and is largely considered a standout visual, so she would logically be the number one seed in the Female Visuals region.

Participation is easy. Simply fill out the survey below by March 11th 11:59 PM EST with your carefully calculated selections and check back on March 12 for round one of the madness.

We will also be holding a mini staff contest, pitting our writers against each other Hunger Games-style. Be on the lookout for the Round of 64 when we reveal the writers’ choices for Top 8. See how your choices match up and root for your favorite writer!