VIXX is a group that has come far from their beginnings in 2012. The six-membered group from Jellyfish Entertainment have created a niche for themselves in the busy and crowded idol-sphere, becoming known for their concepts which have ranged from Jekyll and Hyde, voodoo dolls, cyborgs, vampires, and more. In all these cases, they went above and beyond the norm for the time: they did not just have their concept as a visual for their music videos, but went beyond that and incorporated the concept, in one way or another, in their lyrics, their stage outfits and makeup, and their choreography.

For 2016, the group embarked on their most ambitious project to date: Conception, which is a trilogy of releases that are all inspired by Greek mythology. It started with “Dynamite” which was inspired by Zelos, the god of jealousy, and was followed by “Fantasy,” this time inspired by Hades, the god who, among other aspects, rules the realm of the Underworld. For the third installment, VIXX has returned with “The Closer,” closing their Conception trilogy with inspiration from Kratos, the god of authority.

From first viewing, it’s clear to see that this music video is not as clear cut, just like the two previous singles. It also confirms the seemingly fandom-wide theory that “Dynamite” is actually the end of the trilogy, and that Ken is in fact the mastermind behind all of the chaos that happens. We also finally see gugudan‘s Nayoung, and not just a brief glance at her silhouette as we did before.

The music video starts with a cold opening: we see the members frozen in place – Leo is seen moving away from something unknown, N is falling from a ledge with Nayoung reaching out for him, Hongbin is hovering mid-air, Hyuk is mid-car crash (we also see the reflection of Ken in the car window), and we later see that Ravi is in the midst of putting wine in a glass. We initially don’t know why they are that way, or even what has led to this situation. In fact, by the end of the music video, we only find out that Ken is the only one moving, which is because he has the power to control time (something Hongbin has confirmed). Additionally, it then becomes clear that this music video is told from his point of view – we are seeing the events unfold as Ken is seeing them. That’s another mark for the Ken is the mastermind theory.

Other than the freeze frames of the members, we also get cuts of the dance, primarily during the chorus and latter parts of the song. We don’t see much, but what we do see is that the choreography is not as synchronized as usual. The movements are more reliant on a certain groove that plays with the song, with occasional movements of sharpness, rather than the sharpness and uniformity that VIXX choreography usually is known for. Furthermore, the dance seemingly does not utilize VIXX’s greatest physical strength: their long bodies. A hallmark of VIXX choreography is a certain crispness that looks great because it uses VIXX’s long frames as an advantage. 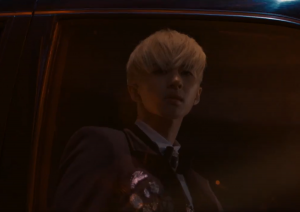 Similar to how I rated my review of BTS‘s “Run” and analyzed that music video, I also had to look at this music video alone, and then as part of the bigger picture that is the Conception trilogy. As a music video alone, “The Closer” does not answer questions, but only makes more questions. It is a visually pleasing music video, and while I do not like the choreography so far, what we do see matches the tone of the music video and is shot well. The music video continues to use light in a way to play up the conflict of the story and the song.

It’s visual aesthetic plays with the more subdued tone of the song — which frankly does not even sound like a VIXX song at first. Once the beat drops, then you get the feeling that VIXX songs have. VIXX songs are usually very epic-sounding, with a heavy theatrical or musical feel, but this is a lot more subdued for the group. I don’t necessarily hate it, but it took a while to get used to it. “The Closer” sees the group stepping away from their more busy tracks (such as “Hyde” and “Dynamite”) for a more stripped down and intricate sound that is comparable to “Fantasy.” In a similar fashion to their latest songs, Ravi’s rap is also less of a section-limited feature and is spread throughout the song, with the rapper rapping in a manner that he usually reserves for the softer side B tracks and his own solo material. Hyuk also continues his progress, with his vocals continuing to be stronger and stronger with each new release. 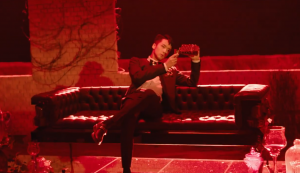 For a VIXX music video, it is not as eventful as it usually is, which suits the more subdued song, although it is as confusing as they usually are. I also see “The Closer” as a continuation of VIXX’s quest to strike the perfect balance of concept without venturing into the gothic, sometimes gruesome, imagery that made them famous. They stay on the safer side of imagery while finding ways to fulfill their concepts – after all, they have to keep their MV rating clean to increase broadcast points for the weekly music shows. While it could have easily been a hindrance, it is not. “The Closer” is inspired from Kratos, and we do get a Kratos figure in Ken.

Going further, I would argue that Ken is the only truly god-like figure amongst the group. In an interview, VIXX has stated the inspirations of their individual roles, and each of their roles help make sense of what happens in the trilogy. And it is important to remember the events of the previous music videos to help contextualize this music video.

“The Closer” is the beginning of the trilogy, with “Fantasy” coming next, and “Dynamite” being the true end of the trilogy. It is a story of how Ken took the members into this realm, this dark realm that we see in “Fantasy,” and the eventual breakout and reunion with Nayoung in “Dynamite.” It is, at it’s core, the battle between Leo and N, with the two members being important roles in all three music videos. Furthermore, the two members are the only ones who sport the Eye of Providence (or the Evil Eye) on their right hand, something that is usually bandaged and hidden. In “The Closer,” we don’t actually see the Eye of Providence, but we do get hints with Leo’s right hand being bandaged.

The question is no longer why these two members have the eye – it is to indicate that they are rivals for Nayoung’s affection – but rather how did they get the eye on their hand. In “Fantasy,” the theory that develops is that they get the eye because they were both pricked by thorns in their journey in the dark realm, and later wake up, tied to a chair, with a foreboding looking chemistry kit behind them. In “Fantasy” we see Ravi in particular holding the potion, and with him pouring something in that glass in ‘The Closer,” it seems reasonable that maybe he is the maker of the potion, and this potion is how the eye gets on N and Leo.

Furthermore, it also explains why Ravi is the only other person who is seen with Nayoung – maybe he is getting something from her for another potion. Maybe it’s a love potion, an altogether different potion from the Evil Eye potion which requires the person’s blood. The love potion would also explain why there are scenes of Leo with Nayoung, yet Nayoung doesn’t seem pleased and even seems like it is against her will, with her facing the other way. In fact, the only member Nayoung looks at in “The Closer” is N, probably meaning he is her true love. 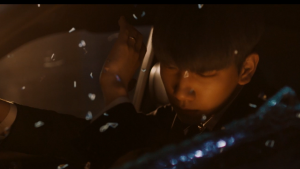 As for the other members, Hyuk and Hongbin’s role are initially seen as helpers of Ken, if you base it solely on “Fantasy.” With “The Closer,” their roles are fleshed out more, especially for Hyuk. Hyuk is described as a Hermes-like character, which explains why he is the one giving the letter to N in “Fantasy,” and why he, as a character inspired by the god that leads travelers, attempts to stop N from going through the door in “Fantasy.” Additionally, Hyuk has the car in “The Closer,” his vehicle for his duties presumably. Finally, Hyuk and Hongbin both try to talk to N in “Fantasy” during the chairs in the forest scene, and we see them going after N, arms stretched out as they attempt to restrain him, in the closing moments of “The Closer.” Restrain him from what? From going towards Ken.

Ken is the true god-like figure in this situation. In “The Closer,” we see him control time. He is the only member able to freely move, although N does move in one scene during the second verse, presumably because that is what Ken wants. Furthermore, time goes back to normal in the chandelier scene – Ken touches the chandelier that is stuck in mid-air and suddenly, time goes back to normal and said chandelier crashes. In “Fantasy,” especially in the drama version, it is made clear that Ken is in control and leads the members further towards the darkness.

The trilogy is concluded with “Dynamite,” where we see the explosions of color and, despite it seeming like N is the true love, Leo and Nayoung get together once again. That Leo and N are the most important members in the trilogy is made even more visible when the members themselves say that Leo’s role is inspired by Achilles, and N’s by Paris. In Greek mythology, both are fairly important in the Iliad and it is Paris who kills Achilles. 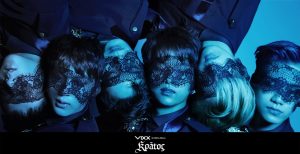 By using Zelos, Hades, and Kratos as the key words of their albums and parts of the overall Conception concept, it can be easy to think that each member corresponds to a god. However, it becomes clear that what VIXX are really conveying is not god-like selves but rather a common theme of Greek mythology: war over love (Achilles and Paris play vital roles in the Trojan War), and gods playing with mortal lives just for fun. Because that is what Ken’s character is doing: playing with the mere mortals that are N and Leo.

“The Closer” plays true to Jellyfish Entertainment and VIXX’s promise that it would clear up any confusion about the concept. Like many of VIXX’s concept, it is quite confusing and not easily understood, but the payoff is great once you do understand it. The song will not be everyone’s cup of tea, as with most VIXX songs. But the music video is beautifully shot, and as the last part of Conception, “The Closer” is a solid conclusion, with the song even giving Hongbin a chance to have more lines.

I do feel cheated that we didn’t get the lace blindfolds, though.

Music Video Rating (as part of the Conception Trilogy): 4.5/5