VIXX's "Hyde" MV is a Foray into the Dark and Dangerous 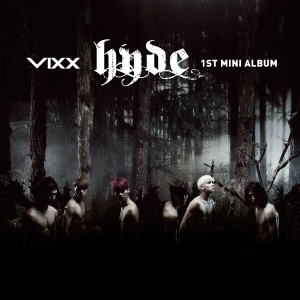 Many K-pop groups flounder after their debut, releasing single after single with constantly changing concepts, and VIXX is no different. However, it would seem that VIXX has finally found their niche after their space vampire theme in “On and On” and will be sticking with the darker supernatural concepts. “Hyde” is one of the creepiest MVs to be released in a long time. Although K-pop MVs are often strange or quirky, it is rare that they can be called straight up scary; but, if you are faint-of-heart I do not suggest this particular VIXX release. From maggots, to tarantulas, to screaming, to strangulation, “Hyde” is nothing like the group’s cute hero image from their debut era.

This is the first time that VIXX has released an MV that required a lot of acting from the members. Although they always tailor their facial expressions and mannerism to fit the concept of their promotions, the use of the story of Dr. Jekyll and Mr. Hyde creates a much more specific character, or more accurately characters plural. The shift between the “good” and the “bad” has to be very clear for this concept to work effectively and much to my relief VIXX was able to pull it off acceptably.

Leo’s performance was particularly impressive when it came to portraying the Mr. Hyde persona. Between the long hair extensions and his already serious demeanor it wasn’t hard to believe that he was actually going to strangle that girl to death. Ken, on the other hand, doesn’t exactly have an easy time being “evil.” His acting wasn’t terrible but his facial expressions felt the least sincere out of the group. This may be related to his naturally bubbly personality, but it is called “acting” for a reason and if VIXX sticks with this dark niche for their concepts he will have to tap into his inner demon to be more convincing.

As for the best contrast, Hongbin certainly takes the cake for being able to look perfectly innocent one moment and hauntingly demonic the next. Because of his naturally sweet face and cheek dimple it is especially noticeable when he switches from smiling to grimacing, which made him excellent for this duality concept. Hyuk, although still young and lacking in experience, has a gift for facial expressions and expressing “creepy” with his eyes. The way he contorted his face especially near the end of the MV, was unnerving. N and Ravi are solid no matter what the concept, which speaks to their versatility as performers, so although Leo and Hyuk’s facial expressions felt more real, N and Ravi still performed well within the concept. 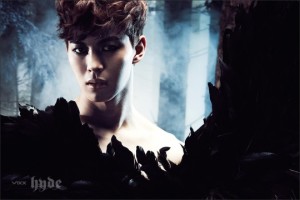 As for the story itself, it is surprisingly dark, just like the MV. The best comparison I can make for the lyrics is the story of an abusive significant other. Someone being sweet one moment then violent and harmful the next is the text-book definition of an abusive relationship. This comparison is made even more relevant by the apologetic tone of the lyrics. You may have heard that physically abusive partners will say that the violent side of their personality isn’t really them, and that it won’t happen again, which is exactly how the lyrics of this song are written.

The MV takes this concept and puts it in the context of fantasy instead of reality. The setting of old manor houses and dark forests, plus the use of skulls and creepy insects, helps the situation portrayed in the lyrics seem less real and more a thing of nightmares and horror stories. Instead of a crazy doctor like Dr. Jekyll, or an everyday human abusive boyfriend, VIXX portrays the two faced character as a demon of sorts, not totally in control of his inner evil. Judging by the end of the MV, however, the male character succumbs to his evil side and becomes a full-fledged fallen angel; So much for the girl’s love saving him.

Speaking of their dramatic wing-sprouting, there were both good and not-so-good things about it. On the one hand, the first time you see the MV the sudden and epic sprouting of giant black wings from Hyuk’s back certainly has an effect. On the other hand, the wings are clearly computer generated, which looks out of place in a MV where nothing else is. This particular complaint carries over to the shots of the members inside of the girl’s chest.

Choosing to use an effect so clearly created with computer graphics was unnecessary in an MV that was already visual stunning without it. Although you could make interpret this scene like “we are seeing them in her heart!” there isn’t anything else in the MV to support that theory, nor do the shots give that impression as it is showing the members in their completely evil form, not as the sweet persona she supposedly loved.

A review of this MV wouldn’t be complete without a mention of the styling and camera work used to create the duality between good and evil. The simplicity of sticking with all white and all black outfits was a good move on the part of the stylist because it created a clear contrast between the Jekyll and Hyde personas without being overwhelmingly showy. The solid colors spoke for themselves without needing accessories or props that would represent good and evil.

More than the clothing, the makeup for the two personas was what really stood out. For the good persona there was minimal makeup, just the usual amount of eyeliner. The evil persona makeup, on the other hand, was like face paint art. Each member had a distinct design that incorporated lots of black, and occasionally some white, on their face in a design that made them look more demonic than human. Like the crazy contacts and elaborate eye-makeup of “On and On,” the evil makeup in “Hyde” could easily be used as their signature for this promotion.

Although choppy editing isn’t always my cup of tea, in this MV it was used properly to emphasize the difference between the two personas in the story. Because the differences in styling for the good and evil were so clear-cut it was easy to tell when each scene switched from the good reality to the evil thoughts. Adding in the shots of the maggots and snakes between the cuts of the members kept the creepy ambiance going and reminded the viewer that this relationship was rotten. Overall, the direction of the filming and the editing played a big role in making the dual personality concepts work and make sense, instead of becoming a confusing mess. 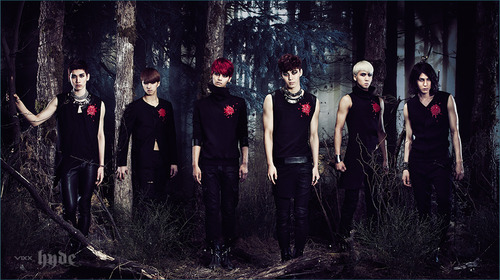 Finally, let’s discuss the choreography. Similar to “On and On,” the dance moves for “Hyde” work with the theme of the MV instead of being arbitrary. Good examples of this style are the move where the members pull their own reaching arms down and the “just can’t control” head move back and forth, which evokes a feeling of not being in control of one’s own mind. There is also a good amount of partner choreography, which we never see enough of in K-pop. If you have a lot of members, you should use it to your advantage and create interesting dances like this MV features with the members grabbing each other’s hands, etc.

This is a solid, if a bit unconventional, release from VIXX. The darker concepts seem to suit this group despite their cute image on variety shows, so it is good that their company has recognized that and continued in this direction. “Hyde” wasn’t what I originally expected from this comeback but it is far from a disappointment. If anything, this release was an extremely pleasant surprise both visually and musically and I am looking forward to seeing the stage rendition on music shows. Overall rating 3.8/5

What do you think, Seoulmates? Is this dark, scary VIXX appealing to you?