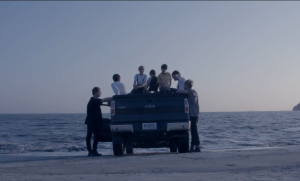 After releasing one of the most heartbreaking music videos this year, BTS is back! And of course, it is with the follow-up to “I Need U.” “Run” is the promotional track to their latest release, The Most Beautiful Moment in Life Pt. 2, and since there’s a lot to talk about, let’s get straight to it.

There are two ways to view this music video — alone, with nothing else considered, or as the third installment following “I Need U” and the previously released “Prologue.” Let’s start with the music video alone and work our way to connecting it to the previous two MVs.

The music video starts with V standing before a body of water, trust falling into it. The scene then shifts back into light, with Rap Monster having a lollipop before putting it into his coffee cup as he departs for the next scene at the train tracks. After this, we fall into a series of scenes, split into several sections.

The first section are the scenes of the boys scattered about. V is with Rap Monster, spraying graffiti on the streets before being arrested by the police. Jimin and J-Hope are in the hospital, although what type of hospital remains unclear. Meanwhile, Suga and Jungkook are fighting — about what, we remain in the dark.

Jin features primarily in the group scenes. Just like in “I Need U,” the group scenes are of them having fun — from partying in a room, to blocking a tunnel filled with cars and spray painting them, to running around the city. In these scenes, he is either filming them or acting as their designated driver. He is not an active participant, instead, he is watching them. 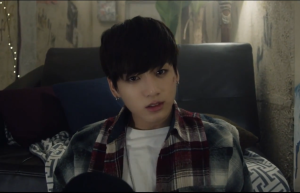 The scenes that stand out for analysis are not these somewhat simple scenes — though they do play a part. Rather, it is the scenes where the seemingly unexplainable happen. One that stuck out most to me was the scene where Jungkook is fighting Suga. When it begins, the viewer is most likely more focused on the question of why they are fighting. And then, when you least expect it, there is a shift — Suga takes a chair, and throws it against a mirror. When the mirror shatters, the camera pans away and the door is opened to reveal the members once again partying. The camera focuses back onto a stunned Jungkook, still sitting in the same spot, watching the scene unfold in front of him. The camera pans back out to an empty room — no broken chair or mirror, no Suga, and no members, but the remnants of party poppers remain with Jungkook still frozen.

Another strikingly consistent theme throughout the whole MV is how the boys are constantly looking towards Jin, almost as if waiting for him to disappear. An example is the scene where five members are cramped inside a bathroom. Jimin opens the door, looks at them like a confused puppy, and then Jin comes into the screen and pulls him into the room, inviting him in, before pushing him into the tub. Another is a range of scenes where the members start standing up in a field, and the camera pans onto Jungkook looking down at Jin, who is still sitting down.

While that is the case for the members, it is not for Jin, who often has a smile on his face. Jin looking on with a faint smile on his face as the others cause some general disturbance of public peace in a blocked tunnel, and Jin smiling as he films the first party scene. In fact, outside of the party scenes or the tunnel scene, it seems like the only time a member even gives anything like a smile after the shift Jungkook witnesses is towards the end. This happens after their escape in the tunnel scene and we are left to assume that Jin is still driving. Here, Jungkook pauses even as the car approaches him, and he gives a small smile. 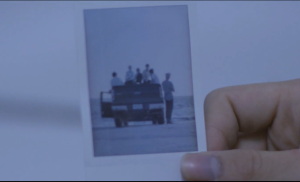 Then the screen goes dim and the credits roll.

But it’s not over! There is one final scene: the members are together and a picture is taken. It starts with all seven members, but once the polaroid is developed, we see that it is only six members, with Jin being the member not in it. The camera then pans out to Jimin holding the polaroid before he burns it into flames.

This is where it all makes sense to me: the reason the members are always looking towards Jin is because they are remembering him, or waiting for him to fade, because he is the one that is dead.

It is first assumed that that this is the continuation of “I Need U,” where most assumed that each member but Jin was dead and the scenes together are of them in the afterlife. But what if that is not the case — “Run” is actually the start of everything and “I Need U” is the ending point of the saga, with “Prologue” bridging the gap and expanding on the story.

A problem I had reviewing this MV was just how much I needed to factor “I Need U” in my scoring and review? Music videos that are so intricately connected to one another do not happen often in mainstream K-pop. While it is a pro, and it makes them stand out in such a crowded month of comebacks, there are also drawbacks.

One such drawback is that “Run” then becomes rife for comparisons with “I Need U.” 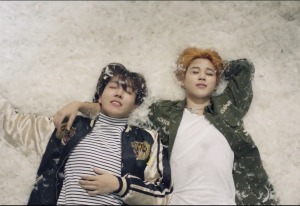 Unlike in “I Need U” where everything is shown to the extent that one can make their assumptions and theories after one viewing, it takes a longer time to do so with “Run.” This is probably because “Run” is, in a way, more abstract, so one has to really sit down, focus, and not get carried away with emotions. This isn’t necessarily a bad thing, but not everyone has the time or effort to analyze.

“I Need U” is an example of an MV with an easily identifiable yet unique storyline. It was clearly defined, leaving room for interpretation while having a clear-cut story leading to the same ending, no matter how you viewed it. Meanwhile, “Run” is not as clearly defined, which left plenty of room for plot holes and scenes that could have easily been cut out so that the story would still make sense.

A prime example of this is the tunnel scene. The tunnel scene is, like the rest of the video, well shot; however, it is perhaps the most excessive scene in all three MVs. The MV could have easily had the same story without it; in fact, the scene made little sense at all except to show their credentials as wayward members of society — delinquents. And this image is one they have played up across multiple releases, starting all the way back to their debut. Consistency in image is one thing, but being excessive in an otherwise solid MV is another. 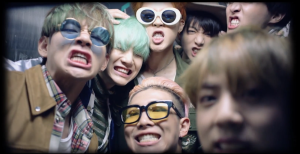 Because this MV and “I Need U” is explicitly connected to one another, there are similarities. Rap Monster still has his habit of eating lollipops, J-Hope has prescription medicine because of whatever reason he’s in the hospital for, and Jimin still likes bathing with clothes on in his tub.

Another is V falling into the water at the very beginning and its similarity to scenes from “Prologue.” However, he does not die. Instead, we clearly see him thrashing about, fighting the water, before he resurfaces.

This is where it gets slightly confusing — does V coming back up mean that he fights back? How relevant is it to the overall story? Or was this symbolism for the struggle one faces when losing a loved one — it feels like you are drowning in sorrow, but it’s ultimately up to you to get past it in order to go back to the surface and live.

Which is where the lyrics come in. While the song is not my cup of tea, this is my favorite set of lyrics from all the November title tracks, and one that hit me personally. It starts with lyrics like “No matter how crazy I run, I remain on the same place” to “It’s okay to be injured. I am happy enough though I can’t get you.” It talks of how it is okay to grieve, and as long as you keep running, it’ll be fine someday.

With the previous MVs, “Run” is only strengthened, and the mentioned faux artsy delinquency then becomes irrelevant. This is because the delinquency ultimately does not matter in the whole story arc, instead it is just the way their situation is. With all three MVs, the story then becomes one of friendship that has taken a toll when one friend dies unexpectedly. In their mourning and grief, their teenage angst is intensified to the point seen in “I Need U,” where they attempt to get away from the sorrows of their life — be that abusive relationships, the need to constantly defend oneself from bullies and the like, or to having to deal with an illness, be it mental or physical.

In the end, it is best to view this music video after “I Need U” and the “Prologue.”