BTS Wage a "War of Hormone" 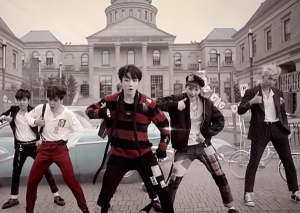 From their debut, BTS has made a habit of releasing songs that are both controversial and extremely catchy. While their more recent songs “Danger” and “Boy In Luv” are much tamer than the social commentary of their debut track, time has been made up for with the release of the MV for the most controversial track off their album Dark&Wild, “War of Hormone”.

The MV is a nice simple affair — very, very stripped down, but still with oodles of aesthetic appeal. “War of Hormone” is an (almost) one-shot dance video. The lone cut is at 3:25, and it’s well-disguised with a camera spin. Unlike many other similar videos, the long takes do not inhibit either the cinematography or the sets. BTS are not trapped in one room, they sprawl over a huge, very detailed set using choreography to do what editing cannot: break up the group into smaller groupings and solo shots. They also avoid the point-and-shoot shots, playing with levels and producing honest-to-god oners and tracking shots, not just a really long take.

“War of Hormone” is in black-and-white, with red spot-colored back in. It gives the MV a very clean, timeless look, one that is reinforced by BTS’s outfits. They are all wearing the apparel of bad boys, from Rap Monster‘s classic pimp suit to V‘s T-bird look to Suga‘s early punk ensemble. Toss in some of BTS’s typically intense dance moves and the end result is a B-side MV that’s slicker and more polished than some title MVs. But for how damn good “War of Hormone” looks, there’s still the matter of the song itself. 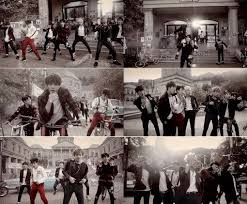 There is no beating around the bush. Misogyny is present in “War of Hormone”. The first line is thanking a hot woman for existing. They check out women, talk about wanting to sleep with women, and reduce women down to their body parts. In “War of Hormone” women are nothing but objects of BTS’s sexual desire. And I, a liberal feminist, have no problem with it, because BTS are just as respectful as they are misogynistic.

“War of Hormone” is called that because BTS are fighting an internal war. Their hormones are going wild and turning them a smidge sex-crazed, but they don’t ever do anything untoward. They are actively trying to not be assholes while they are perusing women in the name of sex. They don’t judge women for dressing sexily or having experience — Jungkook explicitly expresses a preference for those who do.

At no point in “War of Hormone” do the members of BTS act like they have a right to any of the women they’re ogling. They’re not being pervy, controlling, or entitled. For all the objectification going on, there’s no real harm being done. Yes, they are reducing a woman to her body, but so what? Female fans do that to idols all the time without anyone calling them misandric. Hell, we at Seoulbeats have done it to BTS. It’s not the looking that’s the problem.

Misogynistic or misandric actions are never acceptable. Someone walking up to a stranger and copping a feel is always wrong. But checking someone out? That should not be demonized. BTS are not harassing this girl; they are noting that she is attractive and trying to make a move without being creepy. In reality, that probably made her day. Women do not wear bandeau tops and skirts so short that walking takes serious focus in the name of dignity and respect. Women do it because they feel attractive. Getting that feeling verified without getting bothered is nice. Getting that feeling verified in way that might lead to mutually consenting sex is reeeally nice.

The point of “War of Hormone” is that objectification is fine, as long as it stays minimal and between buddies. BTS are shameless in their sexual desires, but at no point do they ever do anything wrong. V even gets the girl in the end. And there is no doubt that while BTS was rapping, she and her girlfriends were swooning over how hot he is. And that’s okay.