Super Junior Finally Act their Age in "This Is Love" 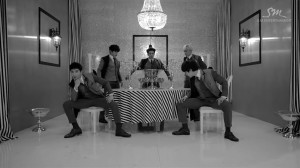 Super Junior and suits go together like milk and cereal — they’re not always together, but they make for a great combination. After such classics as “Sorry Sorry” and Super Junior-M’s “Super Girl”, as well as their previous comeback for “Mamacita”, the group dons these deliberately mature items of clothing again for their latest song “This is Love”.

Being grown, serious men seems to be the main point of this comeback. This does not only become obvious via the visual concept, but the reader will come to a similar conclusion when listening to the actual song. In contrast to the brazenness and arrogance of “Mamacita”, the listener encounters thankfulness and contentment in “This is Love”, a song which gives its subject matter away by virtue of its title.

The love between the speaker and the beloved is without drama; it means everything to them. This is described in many colorful words over a mix of pop beats, jazzy strings, and piano sounds. Eunhyuk, Kyuyhun, and Ryeowook showcase their falsettos, the beat quickly goes back to its lively rhythm again, and the listener cannot help but be reminded of TVXQ’s jazzy releases earlier this year.

The shooting technique of the music video, too, is eerily reminiscent of TVXQ’s “Spellbound”. Apart from one obvious cut, the director wants the audience to buy the illusion of a continuous shot, and a strategic choreography assures us that every member (maybe apart from Shindong, who can barely be seem) contributed a considerable amount of work to the creation of the song and MV.

Super Junior’s maturity is further emphasized by the classy monochrome coloring of the music video, with occasional red accents (because duh, this is a song about love after all!). The box set is upgraded to appear like a hexagon, with each of the corners/rooms representing another grown/classy theme like a library/pool room, a bar, and…a bathroom? Not all of the choices are immediately understandable, it seems.

But the background is not that important for this comeback either way, since it is clear that the focus of “This is Love” is its choreography. It is easy to imagine these formations on the stage of a music show, with microphones having been a frequent, popular prop forever. 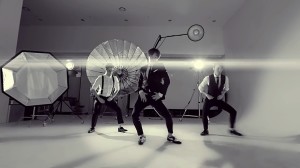 A special highlight in this regard is the interlude with Donghae and Eunhyuk’s duo performance in the second half of the music video. This too refers the viewer to the interesting in-house style SM Entertainment has been cultivating this year. Eunhyuk had already participated in a BeatBurger dance video this year, which put a similar focus on laid-back music and intense lighting.

Honestly, “This is Love” will not take your breath away. It is not particularly innovative; just your typical, well-crafted SM production. But for what it is — the single off of a repackage album, clearly targeted at fans rather than people unfamiliar with Super Junior’s music –, it is good.

For its classy sound and look, “This is Love” gets 3 out of 5. SM’s recent attempts to move their older groups into more mature territory should be encouraged, and fans will surely appreciate this simple yet atmospheric MV, but Super Junior’s comeback for their eighth album better have a bit more oomph.