VIXX Rewinds Back to Jekyll with “You’re.Im.Pres.Sive” 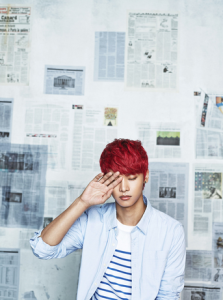 Or is it “G.R.8.U?” Seriously VIXX, I thought we were done with the internet slang and text speech.

One of many debuts last year, VIXX debuted with “Super Hero” which yielded an underwhelming MV but an otherwise OK song. They then returned with the energetic “Rock Ur Body” which had them inside an arcade game. Both songs didn’t really do well for the group in terms of popularity and both songs barely managed to enter the Top 100. After some rest, the group returned with “Ready to Get Hurt (On and On)” and “Hyde.” The way they played with the songs and the choreography matched with their concepts — noble vampires and Jekyll and Hyde respectively. They didn’t stop there as not only did their sound improve, the quality of their MVs have as well. For the most part of this year, it seemed as if the dark concept was VIXX’s niche, but they apparently don’t want to be boxed in.

Riding their recent rise in popularity, VIXX is back one month after “Hyde” promotions have ended with Jekyll, a repackage of their first mini-album.

The first track is the intro track, “Jekyll.” Largely dominated by Ravi repeating one English sentence, it does nicely to introduce to the listeners an overall feel of despair. The addition of that high note by Leo at the 0:27 mark was also a nice touch and did not seem out of place at all. It has a nice beat throughout and could have easily been made into a full track. There is a small concern with the lyrics and one listen will tell you why.

The second track is “You’re.Im.Pres.Sive (G.R.8.U)” and is the song they will be promoting. Without the MV, you can easily picture yourself on a beach or in a car with the windows up while listening to this song. It’s a light-hearted and upbeat song, the complete opposite of “Hyde.” It’s perfect for the summer season while lyrically still retaining a link to the Jekyll and Hyde concept VIXX were rocking.

As for the MV, the summertime feel from the song is translated into the MV. The MV opens with some scenes from the “Hyde” MV before zooming out to a room where the Vixx members make a mess. At first, it looks totally normal. And then you notice that the toilet paper rolls are rolling the wrong way, the members are falling on the bed the wrong way — they are rising from it rather than falling back. It’s when Ravi is jumping over the sofa the wrong way that it really hits you: they are moving backwards but their mouths are lip syncing perfectly.

Turns out, they filmed this part of the MV with their lips syncing to the reversed version of their song. That is, they memorized their lyrics backwards to achieve this effect. They filmed the scene in one take and to perfect it, they practiced for three hours and went through it more than 20 times before the actual filming. 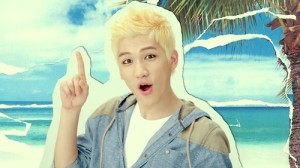 The second part of the MV features the boys singing along with cutout backgrounds. It’s an idea that has been done before, but it does feel right for this MV. It comes at a time where just watching boys make a mess might seem like a drag, so it’s a welcome change in terms of the visuals. Also, the backgrounds were in sync with the feel of the song and the members play it up. Hyuk particularly shines during this part of the MV as he once again has blonde hair, reminiscent of “Rock Ur Body.”

The last part of the MV has the boys dancing with a cloud background. While it might be strange at first that these scenes were not interwoven with the other scenes, a formula for most K-pop MVs, it’s actually good that they did so. The boys do a lot of silly things while in the room of chaos so it’s better that the dance sequence was saved for last, so that it could shine on its own. Choreographed by leader N, the dance is clean, crisp and plays with the beats of the song. Several may have been worried at first since this is the first time he has choreographed for a lead track but from what little choreography we can see in the MV, it seems to be pretty good. It’s no “Hyde” or “On and On” but it doesn’t have to be. For a laid back song, this is equally laid back choreography while retaining the crisp and in sync dancing that VIXX has. My only complaint during this portion of the MV is that Leo’s look seems incomplete. While the others are wearing a blazer or jacket, he is only wearing a shirt. Someone forgot to put a cardigan or blazer on him.

Now, how does this MV and song play with the Jekyll and Hyde theme? My theory is that this rewinds back to the Jekyll days. With this MV, we instead get the boys at the point where they fall for the girl, before the relationship evolved to the abusive relationship we see in “Hyde.” If one were to compare the lyrics, it also holds up.

Hyde: “There is a person inside me that is not me.”

You’re.Im.Pres.Sive: “A me I didn’t know has awakened.”

This showcases the boys happy with their relationship and there is even a line where Hong-bin sings “Are you a good person? If not, who cares, I’ve fallen for you.” Again, it seems to allude to “Hyde” and the Jekyll and Hyde theme is framed using a relationship.

After “You’re.Im.Pres.Sive (G.R.8.U)”, you would expect a song titled “What To Do?” or “Ottokaji” to be a ballad. Instead, it’s an upbeat song with some 80’s sounding elements. Co-written by Ravi, this was probably one of the most awaited tracks for Starlights seeing as it shares the same title as the signature catchphrase of Ken who in turn has his own ‘Ottokaji Song.’ There isn’t really much to say about the song. It’s a fun sounding song and like the song before it, it invokes memories of being in the beach and having fun. Lyrically it follows the same theme as “You’re.Im.Pres.Sive” and is about confessing love to a girl and asking the girl to accept their love. 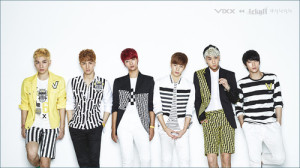 After the third track, we then get to the tracks from the Hyde album and this is where I have a bit of a problem. From such an upbeat song like “Ottokaji” to a song such as “Light Up the Darkness,” it feels as if the change was too abrupt. It would have been better if “Jekyll” had been used to link the two concepts together. It would have been much more cohesive not just to the ears but also lyrically since the main lyrics in “Jekyll” is “I’m still here, yeah I want to go back.” Or they could have presented the album in a way that the three new tracks were at the very end of the album. If that had been done, it would have tied in with the whole rewinding back to Jekyll concept they are doing.

It would have been better if the three tracks were instead released as a single and overall, the Jekyll tracks get a 4/5.

As for the “You’re.Im.Pres.Sive (G.R.8.U)” MV, it represents VIXX going back to the image they started with while showing the maturity they have grown into not just through the lyrics and fashion but also in the overall quality of the MV. A quirky, fun MV fitting for the summertime, it still plays with the Jekyll and Hyde concept and because of all this, the MV gets a 3.9/5.