VIXX Wants To "Rock Ur Body"

Ur excited aren’t u? 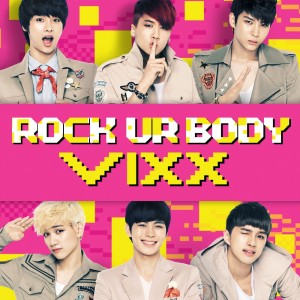 VIXX, the six-member rookie group that debuted in May of this year with the song “Super Hero,” have released their follow up single  titled “Rock Ur Body.” They hail from Jellyfish Entertainment which has a solid roster of ballad singer Sung Si-kyung, ex-Fly To The Sky member Brian Joo, and Seo In-guk, singer and currently the male lead of the critically-acclaimed K-drama Answer Me 1997.

The six members were all finalists of the reality tv competition Mydol and à la One Direction, they were placed together to form VIXX. 2012 has so far been a good year for debuts and rookies, but despite their having some obvious talent, their debut was a little underwhelming. Hopefully with this follow-up track, their song choices can match their talent, but the name of their single doesn’t seem promising. “Rock Ur Body” brings the similarly titled songs by the Black  Eyed Peas and Justin Timberlake to mind, and the thoughts that come to mind with the title make me a little nervous about what they could be referring to when six teenagers are going to be singing it.

The framing device used for the MV is an arcade cleverly titled VIXX Arcade, in which a girl, played by SISTAR’s Dasom, stumbles upon and while looking around chooses a game to play. She decides on a game titled “Rock Ur Body” and when she puts a coin in the slot, instead of a game, she ends up watching six guys dance around in colourful sets. All of the sets felt like a case of déjà vu for me and I was really disappointed that they didn’t take advantage of the gaming concept and make a video game out of themselves in which Dasom had to play, instead of having her just watch with the adorably confused expression of hers.

But considering that the song uses a game as a metaphor for something you want to stare at all night, like a boyfriend with whom you are completely besotted, instead of using the obvious ‘love is a game metaphor,’ so it makes sense why they used the former instead of the latter. I really think that the ‘love is a game concept’ would have been a lot more fun and interesting, especially if they had dressed up the members in cosplay costumes of famous video game characters. There were parts of the MV where it seemed as ifDasom was ‘playing’ the game, but it wasn’t particularly interactive with the members, or much like a game at all. The sets were not particularly good to look at or interesting, in comparison to other MV sets.

The song itself gave a lot of 80’s video game vibes, which fit with the arcade theme, and it sounds very clean despite it having a lot of synths and mixing. I like the vocals of the group, so it made the song a pleasure to listen to, despite not being extremely catchy. It had a nice tempo, the fast and slow parts of the songs were well-balanced, and the song had good structure. The hook could have been a bit better, but it was a nice listen. Although it’s a little underwhelming, it’s definitely a step in the right direction. It doesn’t set them apart from most boy groups, but at least it’s a good effort to try and set themselves apart from the rest. The MV was a little disappointing, when you think of how much more interesting they could have made the theme.  VIXX’s vocals continue to be promising and the energy of the boys is there. All they need is that one song to push them to the big times, but they’re still not there yet.