Jung Yumi of I Need Romance 2012 fame is featured in Nylon‘s September issue  modeling for a sweet, but simplistic photo shoot. The actress recently finished with the drama, her third drama to date and most commercial one which might explain her featuring role in this recent photo shoot. 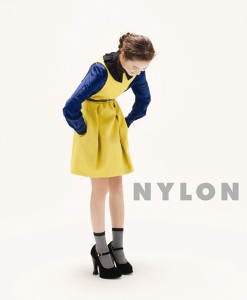 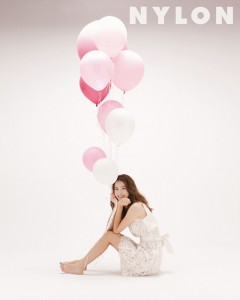 This photo shoot is the sort of photo shoot I like: cute and girly with adorable outfits. I have a soft spot for outfits that are a little unconventional, and Yumi’s yellow dress over a navy-blue shirt is definitely a tiny bit unconventional. The black collar adds to the colorblocking effect and matches her two-tone socks and mary-jane shoes but it’s a little bit too big for the dress and from the angle Yumi’s body is at–it vaguely resembles a ruff. But the mary-janes plus the pleated skirt have a sweet, young girl appeal to them, and although Yumi is a woman in her late twenties, she wears the outfit well. In the next photo, she wears no shoes and instead sits holding a handful of pink-and-white balloons. Her hair is down and she wears a white lace dress. The entire focus is on her and she looks youthful and feminine. However, the setting is overly simplistic for this shoot, particularly for this picture. Her plain, simple look combined with the plain, simple setting makes the photo plain, simple boring. 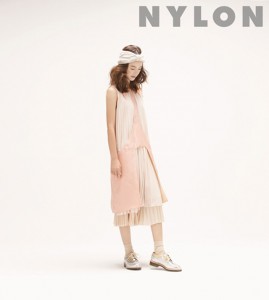 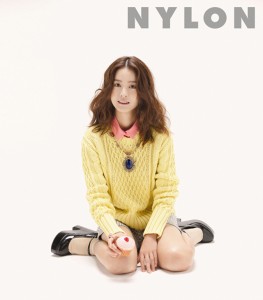 My favorite outfit in this photo shoot would definitely be this next one. It’s the sort of mori girl style I adore, having long layers and a loose fit with soft colors for a feminine look and menswear-style shoes to break up the girliness of the outfit. Her loose, wavy hair adds to her ethereal look, and even her fluffy white turban, which reminds me of a bath towel, looks good. Her next outfit is more boyish. She wears a bright yellow sweater over a pink top, the collar peeking out, patterned shorts and shiny black mary-janes. Her hair is in the same style as her previous photo. The yellow-and-pink combination looks cute, like a smoothie, and the checkered shorts and black shoes prevent the outfit from becoming overly girly. A heavy necklace circles Yumi’s neck, a bulky blue jewel hanging down to the center of her chest. The necklace looks good with the outfit, an extra touch of class although of a different sort, ballroom instead of classroom. Yumi holds a cupcake in her hand, which perfectly suits the sweetness of the photo shoot. The bland background doesn’t hinder the photo so much this time around, due to Yumi taking up most of the photo and the brightness of her sweater standing out against the white backdrop. Her pose is distinctly feminine as well, like all her poses are for this shoot. She’s not a bad model, managing to put some amount of emotion into her pictures, although her face in the last photo looks a little awkward.

What do you think of Yumi’s photo shoot?