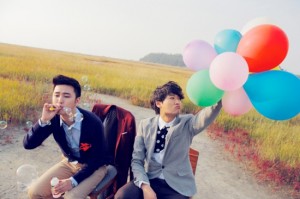 This week on K-pop Indie Gem, we’re highlighting Eluphant. While Eluphant is not normally casually classified under the “indie” label, we’re considering them a fit for this segment under the definition of “indie” as fairly non-mainstream music.

The hip-hop duo, formed in 2006, is composed of Kebee and Minos. They released their first album, Eluphant Bakery, in 2006. Since then, they re-issued that album in 2008, released Man on the Earth in 2011, and also put out new mini-album, Apollo, earlier in 2012. Eluphant was formed after the establishment of Soul Company, with Kebee being one of its founding members. After the company’s dissolution, Eluphant and fellow artist Rhyme-A formed Standart Music.

While the duo has released impressive music together, individually they are no slackers either. Soul Company allowed for unique groups to be formed to release the desired music, so much can be found from the company’s releases. But prior to Soul Company, Kebee had been associated with other crews, such as The Anthem People, and had participated with others in music. Minos had been a part of hip-hop group V.I.R.U.S, which released its first EP in 2003, but after the re-issue in 2006, has been on hiatus.

To get us started, give a listen to one of Eluphant’s newer tracks: “Star Candy,” featuring Bumkey.

Eluphant’s music tends to have this jazzy tone to all of it to accompany the vocals and rap of the song. The duo also tends to collaborate with many other artists in order to especially bring a smoother tone that rapping alone is difficult to present. The above track, released a month or so ago, features the soothing vocals of Bumkey to make a track that expresses the title and intent in quite a lovely manner.

Next is a single of 2011, later released in Man on the Earth: “Superstar” featuring Celma.

Rocking more of an old school sound, this track and the accompanying music video, is pure fun. The same jazzy influences are present, but in an entirely different way, bringing about a much more lively track. In this song, the emotional and husky voice of Celma appropriately contrasts the faster rapping and lower pitches of Eluphant, showing that hip-hop doesn’t have to be as aggressive as it’s often made out to be.

Following is “Bye Bye Bike” on Man on the Earth.

A track without any features, it’s all on the duo to make the song shine. The result is quite the appealing jam. A rather free song, it utilizes a chorus that forgoes the vocal technique normal expected of singers. As such, it’s easily to sing-a-long and take advantage of the whimsical nature of the music. It’s a slower and smoother track than “Superstar” in terms of the music, but the raps are still as sharp as ever.

Lastly is a song off of Eluphant Bakery titled, “Ophilia, Please Show Me Your Smile,” featuring Paloalto and Saet-byeol of Power Flower.

A song off of the duo’s first album with features from two other artists, it’s haunting and in a style much different from the previous songs, indicating the experimentation the duo went on after this first album. Saet-byeol is the thread that connects all rapping parties together for a soothing yet sorrowful track that’s a pleasure to listen to.

For interested parties, additional tracklists for each album can be found in the following: Eluphant Bakery, Man on the Earth, and Apollo.

Eluphant, though a project group, has released a discography that is worth a listen. Through singles here and there eventually compiled in albums, the duo seemed on a roll in the more recent years with music, even while Kebee enlisted in the army in the latter half of 2011. Should the duo choose to continue to work together and with other artists, as I suppose Apollo shows will most likely be the case, we can all look forward to more engaging music and perhaps greater evolution or variety in the sounds the duo is able to produce.