EXID Has Had Enough of Your Lies in “L.I.E.” 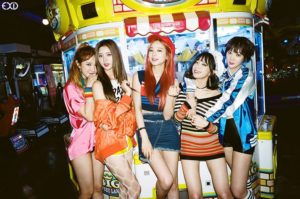 EXID recently hit a momentous milestone in their four-year career as they finally released their first-ever studio album, Street. With this new album, the girls are joining in on the wave of summer comebacks and this time, they’re ditching the sketchy car mechanic get-up and are ready to show off their hotelier skills in their latest music video for their album’s title track, “L.I.E.”

Right off the bat, without taking the lyrics into consideration, the song sounds a bit of a disjointed hot mess. While it is a staple in K-pop to try and fit two to three different genres in one song, “L.I.E” failed to do that gracefully which is definitely a downer considering how the track was able to deliver some pretty solid vocals from Solji and Hyerin and a strong rap verse from LE, who just happened to take part in the production and composition of “L.I.E.”

From the quirky background synths of the first verse and the subtle reggaeton-influenced refrain to the sudden electro shifts post-chorus, “L.I.E” felt like it was trying too hard which can confuse listeners, especially once you do look up the lyrics and understand that the song is supposed to be an empowering track about catching your beau cheat on you and not having to put up with his BS anymore. 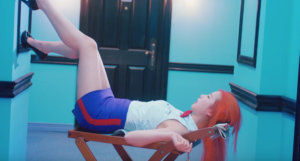 On that note, while there’s definitely much to be said about the instrumentals of “L.I.E.”, the lyrics on the other hand is cutting it to the chase — the girl knows that you’re a cheater and she no longer wants to get caught up in your stupid web of lies. There are no attempts of vague aegyo, cutely asking oppa why he did this and that, nor are there any fleeting moments of hesitation in which the narrator is still bargaining whether or not her boyfriend really is a cheater. There’s none of that in “L.I.E.” and that’s probably one of its few redeeming factors — that it strays away from your typical K-pop sugarcoating by straight up praying that the cheating boyfriend dies and goes to hell, even going as far as wishing that he should have never been born.

And now there’s the music video of this song.

Let’s be real about this: EXID has always been one of those go-to girl groups when it comes to sexy concepts and the music video for “L.I.E.” definitely did not shy away from that. Definitely. The amount of sexual innuendo in the video was so overbearing to the point of being almost hilarious and ridiculous and while this may bring in some discomfort to some viewers, there’s actually an interesting narrative behind all of this sexy hotelier get-up. 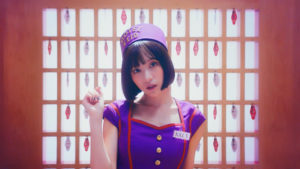 The MV starts off with a couple arriving at a hotel, possibly to stay the night. Immediately, this is something that most of us would associate with adultery narratives: the cheating partner going on secret trysts with a lover at some sleazy hotel or motel. Then you have the EXID members portraying various hotel staff with Junghwa being the valet, Hani being the receptionist, Hyerin as the maid, LE the elevator girl, and Solji the bellhop.

The girls initially appear fed up and bored as if they see this sort of scenario every single day, yet as the video progresses, we see them eventually depict the different ways a person would react or cope with the realization of a cheating partner. Hani seems in a daze — the shock of a cheating boyfriend still unable to sink in; Solji doesn’t seem to care anymore because she knows she’s too good for him; and there’s Hyerin who at certain parts of the video can be seen breaking down and going crazy because she’s been played for a fool. The music video eventually concludes after a random dance break and the symbolic explosion of a male figure 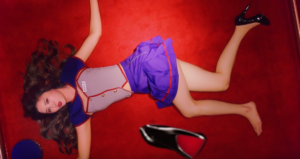 Obviously, despite what sort of possibly ‘profound message’ that this music video has to offer (and despite how it borrowed some beautiful aesthetics from Wes Anderson‘s Grand Budapest Hotel), there’s still no justifying the way the girls were way too sexualized and objectified in the music video. Even if we were to say that this has always been EXID’s image, the music video greatly takes away from what could have been a really good message because of how it distracts viewers from what the song is really trying to say.

The producers of the “L.I.E.” music video could have easily made a cliched narrative centered around a revenge plot (hey, if AOA Cream was able to do it with cheesy graphics and aegyo, then EXID could have done it with their own version as well) that would showcase these girls as people who are not be toyed around and cheated on. Instead, we are given this rather mediocre MV with images that just continue to perpetuate sexist notions which sometimes do lead to the act of cheating and affairs.

What were your thoughts after listening to “L.I.E” and watching the music video? Did you think it was just right for an EXID release?