FNC girl group AOA has been busy laying the foundation for their next album — first we had a new sub-unit in AOA Cream; and now we have leader Jimin releasing a duet with Exo‘s Xiumin, titled “Call You Bae.” Continuing on from AOA Cream’s “I’m Jelly Baby,” we are treated to more pastels, cuteness… And emoticon people (this is the only time I will be acknowledging their existence).

I am pretty sure that the cute concept accounts for why Xiumin is the Exo member in this collaboration — that and the fact he is the only one in his group old enough for Jimin to call “oppa.”

The word ‘bae,’ like many other colloquial terms from Black American communities, has entered the lexicon of ‘mainstream’ American slang. From there, it has trickled down to K-pop — we already have Big Bang‘s “Bae Bae.” Unlike that song, though, “Call You Bae” doesn’t actually include the English term ‘bae’ or ‘babe.’ It’s just the English version of the Korean title “야 하고 싶어” (I want to say ‘yah’), with the familiar Korean term ‘yah’ (야) being replaced by ‘bae’ in the English translation. It’s an interpretation influenced by modern slang, but it is still an interesting one to make.

The song title reflects a desire to grow closer to one’s significant other, through language.

Baby I’m pretty young and wild and so fine
Can’t I just call you bae, you and I
This awkward distance between you and me
Can we narrow it down?

From now on, I’m not gonna call you oppa but just bae
I don’t know, I wanna say bae

Though, there is a regression at the end:

The MV mirrors this, showing a beret-ed Jimin attempting to invite her date inside. The line about her parents not being at home is a cute reference to the many ‘bae come over’ memes out there. And while most people mention coffee, or even tea, I like the idea of inviting someone in for “chicken.” 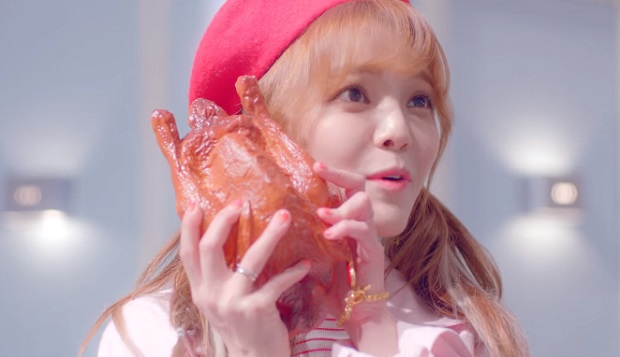 Overall, though, the lyrics rely more on onomatopoeia (“beep boop beep boop”) than wordplay; as such, they are not very noteworthy outside of the few exceptions mentioned above. This is unfortunate, as interesting lines would have been able to salvage the nondescript, cutesy pop-rap tune. Even Jimin’s singing, which I usually prefer to her rapping, is too high-pitched in the chorus to enjoy. Thankfully, it does become more mellow in the chorus; so the whole song isn’t a bust, though that’s not really saying much.

Considering Jimin’s other rap collaborations — “God” with N.Flying‘s Seung-hyub and “Puss” with Iron — the switch to something softer and sweeter could have been a refreshing insight into Jimin’s range as a performer. Instead, Jimin doesn’t seem to know what to do when a song calls for expressions of vulnerability lasting more than two lines. And it’s not just in the song: the entire second verse in the MV, where Jimin and Xiumin are meant to grow closer together, consists of stiff and awkward acting.

It also doesn’t help that Jimin looks a lot like (AOA maknae) Chanmi in those close-ups. 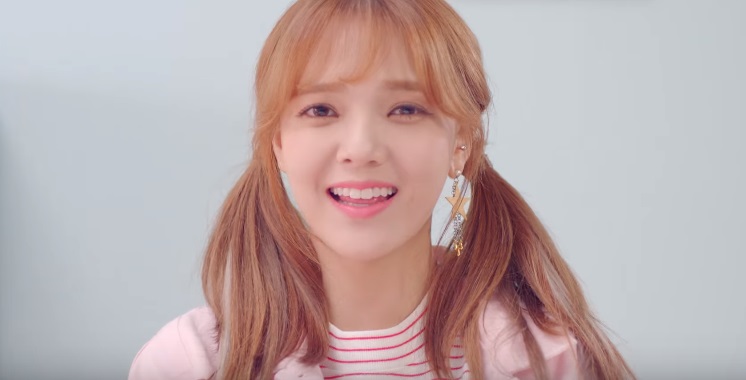 The final scene of the MV is the most memorable, mainly for the styling. The optical illusion involving the ‘separate’ bedrooms and Bublé-esque performance Xiumin puts on in Jimin’s room are only notable in that they help me pretend that the MV is implying our couple spent the night together… But that’s neither here nor there.

Coming back to the styling: Jimin’s bed head is more appealing than her beret and pigtails, and it’s a universal truth that guys always look good in suits. It’s a real shame that the #ootd (outfit of the day) concept did not go in this more mature direction, opting instead for pastels and infantilisation. Treating the adult performers more like actual adults would have actually helped to make the MV cute while also being natural, rather than the contrived antics that make up this MV.

And I think the director knows this too — why else would those cuts that do not appear anywhere else in the MV be included at the end? 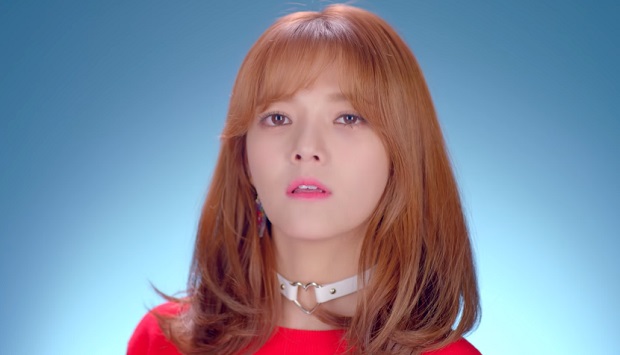 “Call You Bae” wants to use the match-up of Jimin and Xiumin to create something cute; but the end result is a middle-of-the-road song and MV that fails to capitalise on Jimin’s strengths, and is too weak for Xiumin’s presence to overcome.

If my theory is right that these releases will be included in AOA’s upcoming album, and that they indicate the overall sound of said album, I may have more to worry about with regards to the group’s musical direction.