Too Much Confection in B.A.P's "Carnival" 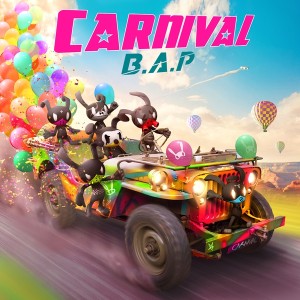 In the past I’ve made the mistake of judging an artist or band’s music based on one body of work. It’s not a fair practice, and it’s not exactly something someone who writes about music should get in the habit of doing. B.A.P is one such group of which I’ve heard one or two albums and just didn’t care for them.

Their style of music wasn’t exactly interesting to me, so I just passed them by. From what I remember of B.A.P, they have a harder edge to their sound, something that while in terms of actual style didn’t gel with me, I appreciated their attempt to differentiate themselves from the fluffy norm of some of their peers.

Now, this is about the same time I listened to BTS’s first couple albums and walked away with the same impression: meh. BTS managed to make a believer out of me with The Most Beautiful Moment of Life, Pt. 1, so I figured why not give B.A.P the same opportunity. After all, with all the madness surrounding their relationship with TS Entertainment, this was the continuation of their revitalization, their second glorious comeback after “Young, Wild & Free.” I was willing to give them another shot, not expecting anything, good or bad, but hoping maybe Carnival had something I could connect with.

The intro had me intrigued. “Today” seemed to be the start of something triumphant, solidifying their resurrection and even brighter future. Its one lyric certainly suggested as much: “Get out of this choking city and head to the place that I’ve been dreaming of, towards the light that’s calling me. Let’s run away today together.” 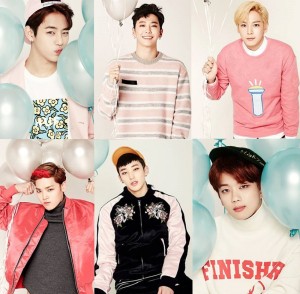 However, title track “Carnival” took a hard right, and I’ll admit this wasn’t exactly what I expected when I plugged in to listen to the group again. Admittedly, I wasn’t around for their official comeback with Matrix, so I won’t claim to know exactly what they’re aiming for in terms of musical “style.” However, I can’t deny I was thrown for a bit of a loop when the song’s first bright and tinkling notes rang out. The cloying sweet of the track set me up for further disappointment in the group. I suppose it makes sense: a rainbow after an ugly thunderstorm.  But, after all that, they come back with… candy?

With lyrics like “the world is my girlfriend” and “the world is like choco. Seoul to Seoul, let’s go,” I was on my way to being thoroughly unimpressed. But after taking a look at the credits, I reevaluated my outlook just a bit. Seems one of the group’s new terms is a great deal more creative control, as their main rapper and songwriter Yongguk not only penned and composed most of the album, he also took on the reins as producer. “Carnival” out of the way, I vowed to leave my mind completely open. Perhaps this is the type of music Yongguk envisioned for B.A.P?

Lead single “Feel So Good” held more promise. Though still not as hard hitting as I remember, I could get behind the swing of the track. I was pleased with some of the harmony work, the vocals making up for the overall unspectacular lyrics. It’s your typical guy proclaiming his love to a girl who doesn’t need to be “flashy” to “shine so much.” Though not exactly groundbreaking, it’s a good tune and certainly works as the lead single of a K-pop album.

Following closely behind is “Go” which has the same overall feel, real candy sweet and uninspiring. Our protagonist sees the world as Skittles and sunshine when he’s around his girl, proclaiming the day is hers; wherever she wants to go, he’ll take her:

There’s no loneliness between two
Draw us on a canvas
I can’t stand. Come here quickly
Tell me whatever you want to do
Shush! No one will notice
Before this night is gone, let’s go to the party
Yes. Whenever I’m with you
The whole world is shining us
It seems everything has stopped
The whole world is beautiful

Even a shout out to Yoko Ono and John Lennon did little to intrigue me. Interesting comparison—did his girlfriend become synonymous with fans with causing discontent within the group? Did she get accused of pulling our leading man away from the world and turning him into something many wouldn’t recognize? There are hints that he’s trying to shield her from some rumor mongering and isolating them from the world (“Don’t mind others’ opinions”; “It should be only you, no others”). But really all I hear are the lovesick quips of a boy sprung on his girlfriend.

Track “Albatross” caught my attention instantly, though probably not for the best reason. When the song started I was quickly transported back to my first listen of Block B’s “H.E.R.” The speed of the opening rap and the muted composition (a lot less heavy-handed than the verse and most certainly the chorus) I got flashes of Zico’s penned track first.  However, once that initial bit of déjà vu faded, musically the song was nothing special.

The lyrics are at least interesting, someone standing up for themselves under an onslaught of negativity. Our protagonist declares, “I’m going to stay like this, being myself… I don’t care if people look down on me.” It seems to be a reclamation of one’s freedom, shaking off the expectations of society and those who’d rather see him fail because he bucks the trend. “Albatross” is a fitting title, evoking images of strength, a mighty fortress or impenetrable wall built to keep out the rabble. The lyrics absolutely saved this song, because, really, there’s nothing here musically I’ve not heard ad nauseum in K-pop. 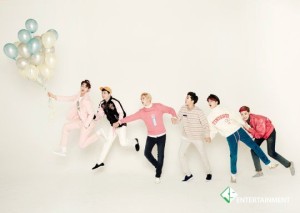 In fact, it’s almost not worth mentioning the last song, which is pretty much more of the same composition as the rest of the album. “My Girl” is another cutesy song about a boy in love with a girl—the one twist being he’s trying to hide his feelings, all the while jealous that she smiles at other guys because he doesn’t have the brass ones to actually confess (“How can I hide my naughty mind when I see you? Your red lips, your sweet scents, one by one makes me flutter. Don’t smile at other guys I’m jealous…. If I see you, I’m shy, you are always shining”). Nothing remarkable, nothing especially memorable.

Carnival may have been a departure from what I remember of the group, but that’s not really saying much. The album’s most interesting song is the one that opens it, the only one Yongguk didn’t have a hand in. At just under a minute and a half, “Today” gave the album a bit of promise, opening with power and excitement. But when the notes finally faded, Carnival got stuck in one gear: cutesy love stories drenched in rainbows and sprinkles. I will say what it lacks in musical diversity (and nuance) it somewhat makes up for with some interesting lyrical choices on Yongguk’s part and fairly decent vocals overall.

In the end, however, I think I’ll set B.A.P aside. They’re not wanting for fans, so it’s no great loss. If I were in the market for a new opinion on the group, this was certainly not the album to do it with.