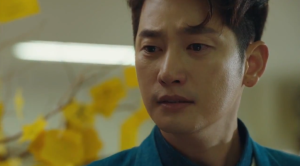 Burning questions are answered, but even more are raised in episodes four, five, and six of Neighborhood Hero. A sense of purpose drives the story for Im Tae-Ho (Cho Seong-Ha) and Choi Chan-Gyu (Lee Soo-Hyuk) as we delve deeper into their characters. The shadow of Jin-Woo’s death continues to linger above Shi-Yoon as he furthers his quest for vengeance.

Up to this point, the advice from Shi-Yoon’s own mother along with President Hwang have failed to persuade him to turn the other cheek. From his point of view, these two people don’t understand. How could they? They’re looking from the outside in. But now he gets an opinion from the voice of someone who was affected even more than him by Jin-Woo’s death — Jin-Woo’s mother. Her plea for him not to use her son’s name to justify his ill intentions will resonate with him from here on out.

The internal struggle and guilt that this creates in his mind sets up viewers for some great character building moments moving forward. The most interesting characters are the ones that we can understand and sympathize with. Despite whichever path we think he should choose, whether it be peace or revenge, we’ll still be able to understand the decision he makes.

As strong as his stubbornness is, Shi-yoon’s innate desire is to protect the people he cares about. Beating up street thugs that terrorize local businesses has earn this silent guardian the nickname “The Shadow.” The fighting scenes do a fantastic job of portraying how dangerous he really is and his extensive knowledge of martial arts. Even with this kind of training, violence is not his first solution. We’ve seen him persistently warn people to back down and step away, but we’ve also seen him break bones if necessary. 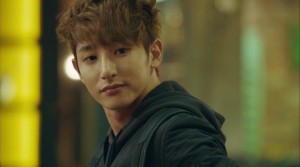 Although he doesn’t necessarily want to be “The Shadow,” he can’t help but to step in every time he sees innocent people being harassed. Luckily, there is someone out there who does want that responsibility — Chan-Gyu. Whereas Shi-Yoon has shown glimpses of darkness brewing in his mind, Chan-Gyu seems to be a genuinely good-hearted individual.

The scenes that involve him are always the more light-hearted parts of the episodes. The best use of humor in the show is seeing the people he is assigned to watch actually watch over him. His developing relationship with writer Bae (Kwon Yuri) is an integral part of him wanting to becoming the shadow. Shi-Yoon refuses to train Chan-Gyu, but we all know that sooner or later he’ll have no choice but to take Chan-Gyu on as an apprentice. Him being “The Shadow” interrupts his ultimate mission, and the only way to balance both is to pass the responsibility to  someone else.

Shi-Yoon is the main focal point of the drama and the driving story, but Tae-Ho may be the most complex character on the show. He is a very involved parent and husband while balancing his professional life, which is beginning to involve things that he doesn’t even comprehend. It’s heartwarming to see him interact with his teenage daughter which he obviously knows is going through puberty. That’s why it’s hard to watch him be tortured for disobeying rules for arguably the right reason. As we’ve seen from previous episodes, Tae-Ho is willing to cross certain lines to provide for his family, but how far will he have to go? While Chan-Gyu is starting to discover his sense of purpose, Tae-Ho struggles with his and his own morality. 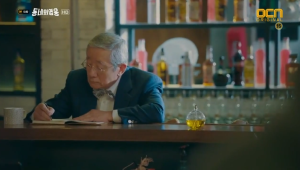 Someone who has overcome his own struggles is President Hwang. When the former intelligence agent revealed his past about his family to writer Bae, I knew his fate was sealed. The writers knew how to play with our emotions and they executed it without remorse. We never see him in a bad mood and the fact that all of these depressing memories still linger in the back of his head is heartbreaking. Through these three episodes, he has become a mentor to Shi-Yoon, writer Bae, and Chan-Gyu, and taking someone this close to them away will change the whole dynamic of the show.

Everything I’ve talked about so far has been done with great effect. My only complaint up until now is that we are not getting much development for our antagonists. We know they want to get rid of smaller businesses that stand in their way and that money is a big motivator, but other than that, these seem like your typical mustache-twirling villains. The scariest villains are the ones who think they’re doing the right thing, and I don’t get a sense of that with these characters as of yet. Due to the nature of the drama and the way the story unveils surprises, I’ll trust the writer’s reasoning for the slower development of the antagonists for now. It hasn’t negatively affected the story line yet, and has actually given them a chance to develop their protagonists even further.

These three episodes have definitely been more engaging then the previous ones, but that’s natural as the plot unfolds. We’ve been set up  for some interesting character developments as these characters are faced with impossible decisions to make. Tae-Ho’s predicament adds a lot of depth to the show, and Shi-Yoon’s balance of character gives us someone to relate to. Neighborhood Hero‘s tone is beginning to take a darker turn, and now that we know any character could be on the chopping block, the stakes are even higher.

What did you think of these episodes? Which character do you relate with?