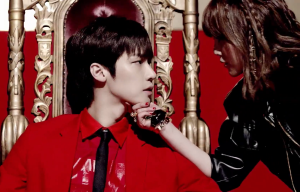 Capitalizing on the successes that she found on Unpretty Rapstar, Jimin from AOA is back in a new hip-hop project. Originally entitled ‘N Project’ from her company FNC Entertainment, she paired with N.Flying’s leader Seunghyub to release a digital single as the project group Jimin N J.Don. Their song “God” is a hip-hop song that sees both participants trade bars over a trap beat.

The beat in “God” is a pulsating, glitchy affair. The tempo slows a beat during the verses before building back into a quick rhythm. Rhymer and Assbrass both return as producers after their prior successful production for Jimin with “Puss.” In “God,” the sound and images push forward this image of being the ruler, the true rulers of Westeros, or whatever area – in this case perhaps the music scene. Jimin and J.Don both take their turns sitting upon the (literal and metaphorical) throne; images of crowns combine with a gold and red color scheme, which permeates the clothing, to emphasize a dominance over this space.

With all these themes of power permeating the imagery, one may assume the lyrics would hold a similar attitude – strength in various means. Jimin’s verse does not deviate much from this preconception. She rhymes about being confident in herself and her rap ability. Her verse builds towards her statement that she is akin to a god. One line in particular caught my attention:

“You can’t handle me, you’re a coward.

You become a kid when you face me.” 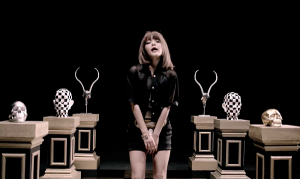 Jimin pushes this statement forward – purporting that any opposition that tries to denigrate her ability would not match up when faced against her.

Not all attention is good attention. While she gained a lot of solo exposure for her rapping skills on Unpretty Rapstar, not all of the responses to her participation have been positive. While some lauded her skill as an idol rapper with unexpected capability, others found her depiction on the show not as tasteful – citing hypocrisy in how she will at moments boast about being well known — from being an idol — in her rap verses while also simultaneously complain about the burden of being seen as lesser by falling under the idol moniker. Regardless of the varying levels of reception, her exposure on the show certainly helped her popular release “Puss” hit number 1 in the Gaon Charts. Her confidence seems unscathed here as she proclaims she is “Shin Jimin, God Jimin, Diva.”

On the other side of the spectrum, in perspective, J.Don takes a more humble approach. He recognizes his status as a rookie in the business. His verse is geared towards introducing himself and putting his group’s name on the map. J.Don raps about his struggle to gain recognition. Originally, his group N.Flying was supposed to debut in 2014, but after some injuries and setbacks, they have yet to make their Korean debut.

Because he lacks seniority in the business, he attacks the track with a contrasting angle. He acknowledges:

To flip over this gameboard,

I spit and grind my teeth every day,

There is a fire underneath his words. He points out obstacles to his success. Seeking to find respect while an idol and also a rookie is something not an easy task. J.Don asserts his intention to make a name for himself. On this track, he puts on a rap introduction that establishes this fiery ambition to make the name J.Don known. 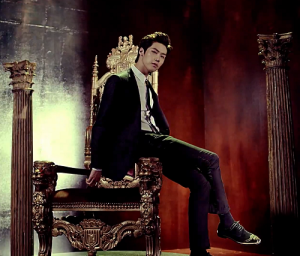 The music video emphasizes the authoritative tone of the song with presentation of objects holding a symbol of power. Each chair that they sit on is regal. There are ornate crowns on display. These are interestingly contrasted with emblems of victory over their opposition. In one scene, skulls, a checkered face and antlers are propped on pedestals – a kind of gallery of those adversaries who they have overcome.

There is another side to the checkered theme that shines through. Jimin and J.Don sort of represent different sides of a coin. While Jimin publicizes her power, citing her amassed popularity, J.Don seeks to reach that same height through his ambitious struggle. The checkered motif brings out this duality in the patterns in clothing, through the chess props of the knights, and in the graffiti words scrawled on the walls.

Overall, “God” is an intriguing project. As someone who did watch Jimin’s progress through Unpretty Rapstar, I found her lyrics to be not as memorable aside from a few lines here and there — I still don’t get a sense of the real ‘Jimin’ nor that there was more depth in her story. While some of the lyrical content and the delivery of the rapping isn’t particularly outstanding, the song does present a strong conceptual theme overall. The MV reiterates these themes throughout and brings out the duality and power in the props and color scheme. As an introduction to J.Don, it serves its purpose in introducing him to a wider audience. Overall, this song sounds like it would be popular in clubs just based on the beat alone, and conceptually the MV is quite concise in its regal presentation.