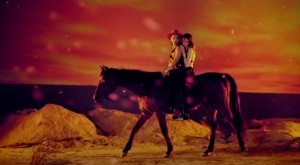 If you haven’t heard already, Big Bang is finally back. Immediately following the release of their emo “Loser” MV, the group released the 19+ innuendo-fest that is “Bae Bae.”

There is one word to sum up “Bae Bae”: sex. From the song to the MV, it’s all about sex.

There is no great, deep underlying message to “Bae Bae.” The song is simply about the feelings associated with love and lust at the age of 25, and the wish to never age. Initially, the choice of 25 was the age those working on the song (Teddy, G-Dragon and T.O.P) thought women were the most beautiful. But, they altered it to mean just general feelings at that age. After all, they wouldn’t want to offend their largest fanbase: women.

Sex plays a big role in the lyrics, from the beginning (such as G-Dragon’s lyrics about blood rushing to certain place) to the end. If there was any doubt as to whether or not the song is about sex, then the ending refrain removes such doubt. A common Korean slang for sex is “making rice cakes.”

It seems Big Bang has had a sexual awakening in the “Bae Bae” MV, making it even more obvious. Mostly taking on roles of romantic caricatures, the group appears to be on a psychotropic drug-induced trip.

G-Dragon opens up the MV. He seems to playing the role of a crazy pervert who comes to a religious epiphany. He runs around feeling up mannequins and then suddenly he’s praising a Jesus painting and crying at the sight of an angel statue. This is reflected in parts of his lyrics, but it’s quite the odd progression. Given that this is G-Dragon, him being strange from his behavior to his outfit choice is not terribly surprising.

Next up is our Fabio-wannabe, Taeyang. Taeyang seems to have walked off the cover of a Wild West cowboy romance novel, complete with long hair and a horse. A sexual joke about riding a horse would be too easy, but it’s there. 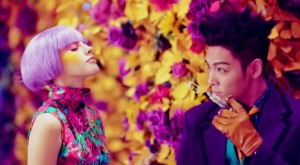 T.O.P’s scenes were probably the most amusing and innuendo-filled, as he took it to a whole other level of crazy. He’s playing around in a flowery tunnel – probably representing a vagina, especially with that big flower at the end. Then, he shoots white, viscous liquid from a syringe, which is a cringe-worthy symbol of ejaculation.  The fact he shoots in her face only adds to the overall allusion to sex.

Following up T.O.P is the princely Daesung. Stranded all alone, with his chest out there for all to see, Daesung seems lonely. That is until a mermaid appears to seduce the guy. He doesn’t seem to be torn up about being stranded on a deserted island anymore. The use of water is also symbolic of sex: if you’ve watched enough film, you are aware that crashing waves are used during sex scenes instead of showing the actual act itself. 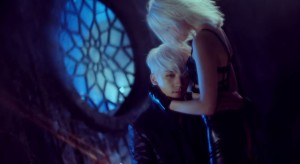 The last individual shot goes to Seungri. Seungri’s scene is actually a bit depressing. While not exactly sure about his role, he does seem to possibly be haunted by a past love. There’s a bit of sadness on his face, even as hands seem to move over him and he’s embracing a woman — a woman who then disappears.

It’s notable that the rappers, G-Dragon and T.O.P, have more frantic, suggestive, and involved scenes. This matches their more pronounced rap parts. Meanwhile, the soothing vocalists have more romantic depictions to match their parts. 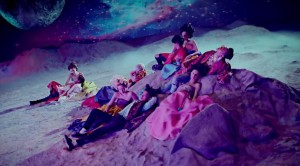 The MV isn’t without issues, though. When sex and traditional clothing are involved, there’s the possibility that some criticism is going to be raised. In the ending scene, the models dance and run around in a hanbok styled without the jacket (jeogori). This would have been perfectly fine – Big Bang is Korean after all – but, given the debauchery in the MV, eyebrows are raising. As a non-Korean, it’s difficult to take a position on the matter: is Big Bang being disrespectful to their own culture, or it is okay because they are Korean and people likely did partake in sexual activities while wearing hanboks in the past?

Another noticeable element in the “Bae Bae” MV is the use of white female models. Last year, the use of white women in another MV sparked a discussion on why their inclusion was a bit problematic. So, how does Big Bang fare? Well, it doesn’t seem they are just art to be used to signify status; they actually seem to be enjoying themselves and actively participating. If they filmed the MV in the US, like for “Loser,” them using white females isn’t shocking – there’s surely plenty to choose from. Though there may be want to say they could have use females of different colors, at least this time the ladies don’t feel like mere props to claim some sort of elitist superiority. 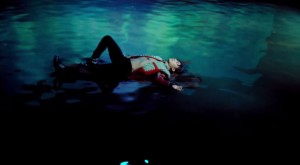 “Bae Bae” is a good example of the sum-of-all-parts. Big Bang does away with its usual part trade-off and harmonic choruses and instead, every member stands on their own. You get to hear each member’s voice and style, showing that they are individuals at the root.

While not the best song – there isn’t even a catchy hook – it’s not bad either. The beat during the rap parts is groovy, but since it doesn’t maintain throughout, it’s a bit of a letdown. The let down continues with the ending, as it feels like something more should come after Seungri’s part. Yes, you may forget the song, but you won’t forget that MV.

What was your take on “Bae Bae?” Any other interpretations?