To start our discussion off, I’m not quite sure how to feel about Big Bang’s comeback. They just uploaded a polaroid teaser image, with not much description other than a date and time. As expected, Korean reactions to this comeback are mixed, as they should be, in my opinion. Mine are also mixed, but heavily leaning towards “huh, this is actually happening?”. K-pop groups returning after a scandal and/or hiatus is already difficult, and it’s even more sensitive if a member gets eradicated for said scandal.

However, I highly doubt that Seungri with Burning Sun, TOP with Han Seohee, GD’s pet abuse, and Daesung’s prostitution issue can just be swept under the rug with a few hits. Most of this news is now repeated as an afterthought, reflecting the numbing that most of us have felt over time… which is pretty shocking, considering the scale of crimes (whether legal or moral) this group has covered since 2019.

Some may feel like it’s time to move on, and I’m happy to respect their choice. However, I personally can’t forget, and I can’t believe they’re actually coming back after causing such havoc around them. Also curious to see how the tides may turn regarding public opinion. Am I the only one being sensitive about this comeback, or does anyone else feel the same sentiment as I do?

Gina, I completely understand your feelings going into Big Bang‘s comeback. It’s a little surreal that they are coming back, after such a long break from releasing music, and after all that’s happened during that break. I’d be lying if I said I wasn’t curious what they’ll come out with, and because they are coming back as four I’m willing to tune in, but I’m also feeling some hesitancy.

Thinking back to the first time I encountered Big Bang, at the very start of my K-pop journey, it was all so simple then: the music was great, so I was a fan. Now, sometimes I rock out to “Tonight” and “Bang Bang Bang” without a care in the world, and sometimes I hear Seungri‘s voice in Big Bang’s recordings and literally flinch. Based off Twitter, a decent amount of the Big Bang fandom has spiraled into aggressive apologism, but I also don’t fault the fans who have loved Big Bang since they were literally children and just want to embrace this quartet comeback with some nostalgia. It’s a big mess, and this upcoming comeback could make it messier. But I guess there’s a part of me that hasn’t quite given up on the magic of Big Bang’s music, a part of me that wants to see this as an opportunity to put a not-so-dishonorable bow on their undeniably iconic career. We’ll just have to see.

On a lighter note, I’m glad to see (G)I-dle return strong as a newly five-member group. “Tomboy” is an enjoyably punky track with a fantastic MV and some killer performance moments. Lyrically, the track leaves something to be desired (“It’s neither man nor woman, just me I-dle” is cringe), but the take-no-prisoners attitude of “Tomboy” is a total home run.

Spring is here, birds are chirping, flowers are blooming, and I’ve fallen head over heels in love with A Business Proposal. Remember how I said that I can sometimes enjoy a few episodes of a drama, then put it on hold for more than a year? Well, I zipped through six episodes of this show in a day.

Whether chaebol-centred rom-coms are something you love to hate, or hate to love, Proposal is after your heart. It’s packed with conventions of the genre, but it angles these cliches in a self-aware, playful way. The show’s female lead, played with excellent comedic chops by Sejeong, is a candy-type heroine. But she’s not just hardworking and cheerful; she’s also actually capable, a quality that attracts the male lead’s attention and respect even before they ever meet or become romantically involved.

(Note: Mild spoilers for episodes 5-6 ahead.)

Starring opposite Sejeong is Ahn Hyo-seop, who deftly pulls off a subtle parody of every “perfect”, imperious chaebol male lead ever. His character goes through the awful pigtail-pulling phase, but his actions are quickly called out and he moves into a genuine effort to win the female lead’s heart… under the guise of work. But this spectacularly backfires on him as well, because the female lead is so committed to her work that she treats his efforts exactly as the professional activities he claims them to be.

The show also has fun with cliches such as the contract relationship, the meddlesome rich parent-figure, the bitch slap, and the chaebol-meets-street-food (my personal favourite twist). But while it may make light of these situations, it never loses sight of the human sides to the characters who get entangled in them. Echoing other fans of the drama, I can’t believe I’m actually saying this: I can’t wait for Mondays.

While A Business Proposal has been a miss for me, I have to say that Crazy Love has completely captured my heart. It’s overall premise is similar — a fake relationship between a CEO and his secretary, but the execution is very different. It’s weird. It’s absolutely absurd. It’s unexpectedly fun. Crazy Love is a drama that uses almost every typical K-drama trope, but in the most atypical ways. It’s only four episodes in, but I am eagerly looking forward to the next few. Kim Jae-wook and Krystal show very different sides of themselves of actors, and it makes it just that much more exciting to watch. I’m also looking forward to Han So-hee and Hyungsik’s Soundtrack No. 1, a short drama series that starts towards the end of this month.

I’ve been focusing on dramas because K-pop hasn’t been as exciting for me. However, Red Velvet’s latest mini-album has peaked my interest. I wasn’t a fan of the title track, but the b-sides are gems, especially “Beg For Me”. Other than that, I’ve been busy in TVXQ-land. With four months of consecutive EP releases as solo acts and a group in both Japanese and Korean, I’ve been plenty busy (and satisfied) with all the music I’ve been getting. Their MVs are also becoming increasingly theatrical and it has been filling a gaping hole in my heart — fingers crossed for no more boring MVs in the future.

I have, happily, become interested in listening to music I had previously left unheard lately. It feels like I’m back at school, having fresh favourite music every other day. I think regularly watching Amazing Saturday and being compelled to listen to sound clips repetitively has taken the apprehension away from hearing new songs a bit. I’m digging into the catalogues of groups I have only casually listened to before, subunits, and soloists: it’s a whole new world! Some of the newer girl groups have caught my interest, namely Itzy, aespa, and StayC. StayC’s discography is small but impactful. I’ve been bopping along to tracks like “Slow Down” and “Complex” from their Stereotype EP and the infectious title songs are mainstays in my playlist rotation.

I have also been enjoying a few idol-fronted YouTube channels. Yena, is one of my favourite newer MCs and her show Yena Animal Detective is all charm. The first season sets its relaxed tone from the initial episode with appearances from her brother and actor Choi Sungmin, dogs, and an inside look into their home. She frequently is assisted by fellow celebrities in learning more about animals and it’s been a fun, easy watch. Viewers can expect all the favourite idol-and-animal moments: hanging out with kittens and puppies, fear box pranks, and holding a snake are all covered. I am looking forward to seeing what they will get up to in season two when the production staff might have to ramp up the tasks from visiting zoos and sanctuaries.

With Kim Wonpil enlisting at the end of this month, it’s official– Day6 are on hiatus until 2023. It has definitely been awhile since I’ve felt this amount of sadness towards a K-pop group being on hiatus, but it definitely hits harder considering the fact that Day6 haven’t had a full comeback performance since The Book of Us: Entropy.

It has been a tumultuous time for MyDays, with the announcement of Jae and Sungjin‘s break, to Sungjin returning for one more group comeback before announcing his enlistment (on his way to the enlistment site, mind you), and Jae terminating his contract with Day6 and JYP Entertainment. I won’t lie, I am a bit worried about what the future holds for the group, as I would love for Jae to come back, but in light of recent events, it has been a bit difficult to consume his content. Either way, only time will tell if we will see all five members return to the stage as a band again.

March left me broken hearted with the news of Nu’est‘s disbandment. While Baekho and Minhyun remain in Pledis (acquired by Hybe Labels) and are working on individual projects, I honestly couldn’t see them going on full-on solo singing careers. Nu’est have always been a close-knit group musically—even when Minhyun was in Wanna One—and they had to promote temporarily as Nu’est W. That scene when JR and Baekho in “Spring, Again” were sitting across from each other tells a lot about the thought process of the group leading towards their decisions. It also somehow reminds me of Apink‘s “Dilemma“.

Speaking of disbandment, SinB of Viviz revealed that she didn’t know that “Mago” was going to be their last promotional single as GFriend. Seems like the girls knew long before that their contracts will no longer be renewed. While we will never know all the details of the story, I find it saddening how entertainment companies (ironically Source Music was also acquired by Hybe Labels and they are about to debut a new girl group soon including Iz*one‘s Sakura Miyawaki and Kim Chae-won) treat their more senior and domestically successful artists. Nu’est and GFriend are both loved by the Korean general public, so why treat them badly? Is domestic success no longer the measurement of success? Whatever it is, I still hope for a Nu’est and GFriend reunion with their respective members, giving the fans a proper farewell in case they really won’t continue as a group anymore. 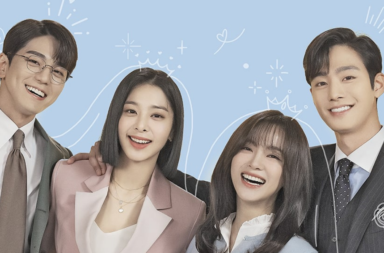