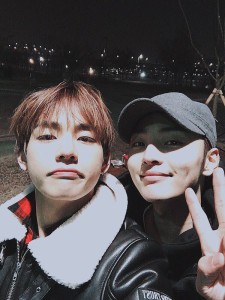 MBC’s Celebrity Bromance, also known as Flower Boys’ Bromance, premiered through MBC’s MBig TV channel on YouTube earlier this month. The series features friendships between male celebrities, and first in the lineup are BTS’s V and rookie actor Kim Min-jae, who appeared briefly on Show Me the Money 4 and acted in Persevere, Goo Hae-ra and Twenty Again.

MBig TV is MBC’s channel for entertainment content that caters to mobile users. Owing to the rise of “snack culture”—the consumption of information and cultural content at a fast pace without engaging deeply with them—web-based, bite-sized entertainment like webtoons and web dramas are increasingly common. With its short episodes that range from 10–15 minutes, Celebrity Bromance is the variety version of the web drama. The episodes with V and Min-jae were actually filmed at one go, producing roughly an hour’s worth of content that was split into four parts.

MBig TV also seems to have an international target audience in mind, as their shows are accompanied by English subtitles. Unfortunately, the YouTube closed caption function does not make for an ideal viewing experience. Korean variety show producers are generally fond of putting in captions to comment on the action. In Celebrity Bromance, the subs for these captions had to be squashed together with the subs for the conversation, which can be confusing and disruptive to the viewing process. Longer sentences in the conversation also tended to overlap with each other and couldn’t be read properly. Still, I truly appreciated not having to wait around for subtitles, or face the K-pop fan nightmare of fan-subbed videos being taken down before I get to watch them. 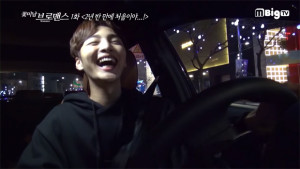 On to Celebrity Bromance’s concept: the show is pitched as an “honest programme” that presents real aspects of the friendships of celebrities without producers’ mediation. It corresponds to a strand of non-interference variety shows that seem to respond to the over-scripting plaguing many variety shows. Some scripting is always necessary, whether in reality TV or dramas, but over-scripting creates a false reality that parades as reality through misleading editing or creating personas and relationships for cast members to adhere to. The most notable example of over-scripting is probably We Got Married, in which the false reality of the couples’ relationships created expectations on their behaviour that crossed into reality.

Conversely, the lack of scripting can pose problems as well. A number of Roommate episodes from both seasons were frustrating and tedious to watch because they lacked narrative flow, and often cobbled together unrelated scenes. Fortunately, Celebrity Bromance manages to escape this issue because of how short its episodes are and how each pair’s feature doesn’t extend across that many episodes. 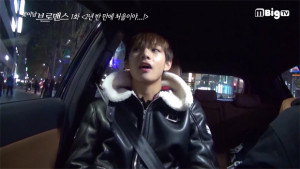 The show makes good on its “non-intervention” promise in that the activities of the filming were decided by Min-jae rather than the production team, although I assume that he had to run it by them beforehand. He picks V up and they drive first to a massage shop, then to Han River to skateboard. Producer intervention, however, goes beyond just the activities planned for the filming; it includes what the producers do with the raw material they have—in other words, editing.

The editing had a pretty rocky start. In the car ride in Episode 1, the cuts to clips from music shows for some background on V and Min-jae felt a tad too long and frequent. Across the next two episodes, whenever more interesting comments are made, the producers would freeze the frame and replay it several times. This is a pretty common editing technique in variety shows and it can heighten comic effect, but the Celebrity Bromance episodes are so short and this happens so often that it felt rather disruptive to the viewing process. The addition of background music also did not feel purposeful much of the time.

What keeps the show going, though, is the camaraderie between V and Min-jae. Even with the choppy and sometimes exaggerated editing, it is obvious that they are at ease with each other, making silly remarks and bantering or showing concern in small gestures—like Min-jae choosing the massage shop session because he knows V is tired from practices and promotions, or V feeding Min-jae candy in the car. It was a good idea to cast V because he is known for being unorthodox, and is doted on by fans for his endearing unpredictability. This facet of his personality is very much in line with the show’s aim to show more candid interactions. 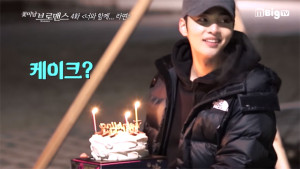 The editing finally hits a stride in Episode 4. V loses a race with Min-jae and has to treat him to convenience store food, so they load up on ramyun, sausages, and fizzy drinks (in deep winter… these kids). The producers tone down on the freeze-frames and replays, and the minimal editing really brings out quirky and cute moments between the boys. The moment that takes the cake (pun not intended) was the sweet birthday surprise that Min-jae had been preparing for V right from the start. When V runs back to retrieve the sausages he left in the convenience store’s microwave, Min-jae brings out a cake that he had been hiding and hastily lights up the candles. The way V’s face softens from shock into a “you shouldn’t have” expression and how Min-jae tilts his head in response speaks volumes about their friendship.

The last episode also saw a much better use of songs, such as Brown Eyes’ “Don’t Go Don’t Go” over a clip of the sausages V left behind in the microwave. There was a special clip at the end, a must-watch for BTS fans, with J-Hope and Rap Monster reacting (hilariously) to the episode. When they see the surprise cake, they have a moment of crisis:

Rap Monster: Did we throw a birthday party for V?

This was paired perfectly with the opening of BTS’s “Danger”, before J-Hope bursts out laughing in relief when the show cuts to a video of BTS’s celebration for V. 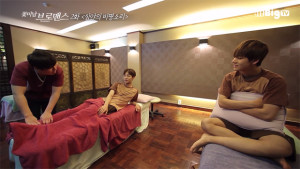 The V and Min-jae episodes seem a bit more centred around V, which I am guessing may be due to V being casted first and then bringing Min-jae on board. A lot more is revealed about V than Min-jae, especially in the special clip at the end of Episode 3 that features V’s other friendships with celebrities. We see his appreciation for his fans when he shows Min-jae the driving test prep book that a fan gifted him with, and when he spots posters that fans put up for his birthday. As such, I can’t really see Celebrity Bromance appealing to viewers who are not already fans of the celebrities casted. But as the show isn’t making any claims to do so, I’m not going to hold it against the producers.

On the whole, I appreciate how Celebrity Bromance gives a glimpse into K-pop idols’ interactions outside of their own groups and companies. If the V and Min-jae pairing and the second pairing of Zico and actor Choi Tae-jun are any indication, the show seems to be featuring singer-actor friendships, which are not often in variety spotlight. The editing might need further polishing, but the concept of showcasing friendships through more everyday activities is a welcome one. Here’s hoping that there will eventually be a series on female celebrity friendships too.

Have you watched the episodes? How did you find them? Sound out below!