WINNER Are Traditional Idols in "Sentimental" 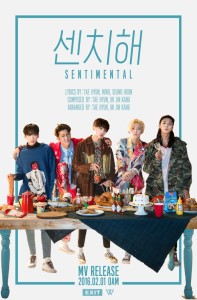 Inner Circles, we made it.

After a 17 month hiatus, WINNER is back and have graced us with three music videos. For the uninitiated, here’s a brief recap of WINNER’s career so far: they were Team A in WIN: Who Is Next (and won), then debuted months later with “Empty” and “Color Ring” as the lead singles for their first full length album, 2014 S/S. During 2015, they have been involved in several different solo activities – from acting in dramas, to Mino participating on Show Me the Money 4.

While waiting for their turn in the roulette game that is YG Entertainment promotions, they have kept busy. How can they not, with four of five members involved in the process creating and writing their music. For the first installment of the supposedly year-long project, EXIT Movement, the three tracks that have received music video treatment are all Taehyun-helmed pieces, and “Sentimental” is the most colorful we have gotten from not just Taehyun, but from WINNER.

Not counting “Don’t Flirt,” which received no music video and was a follow-up song, “Sentimental” is a vibrant yet subdued WINNER title track with an equally vibrantly subdued music video. When one thinks of WINNER, the usual visual is sublime, subtle music videos with high class quality — music videos that are usually shot at night and with an expert’s hand to get the right visual simulation without it being drab. When it was announced that this music video is a DigiPedi production, we should have known that it would be different.

How would the team behind B1A4‘s “What’s Happening?,” SHINee‘s “Dream Girl,” and Orange Caramel‘s “Catallena” and “My Copycat” take on the established WINNER visual?

To answer: they do it in their vibrant, pastel fashion, all while still looking and feeling like a WINNER music video.

It opens up to Taehyun laying alone in a room, seemingly trying to distract himself from something that bothers him. From overhead, the camera follows as he gets up and leaves his room, going into a gold elevator. And as the music changes and the next member sings, the camera flawlessly moves to the next room – Jinwoo in a bathtub – before going to Mino, Seungyoon and Seunghoon‘s own rooms. It continues on in this fashion, with additional scenes of all of them together playing as a rock band or in a kitchen. 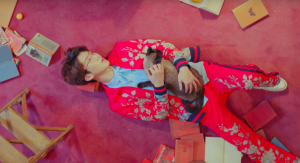 What makes all this different from most music videos is that it is almost entirely shot overhead. The only times it is not is when all five members are together.

So far, there’s nothing of interest here to talk about beyond the usual fangirling over Seunghoon playing with a cat, Seungyoon having his weird moment with a bicycle, or Jinwoo being wet in a bathtub. In fact, I would go further and say that, at first watch, it’s a normal idol music video. They even dance! It’s a weird dance, and involves a lot of what is sure to be embarrassing swaying, but WINNER is dancing, albeit only for a couple of frames. The only time we got WINNER dancing in a music video was in Mino’s solo, “I’m Him,” and even then it was part of a cameo.

And then one watches it again, this time focusing on everything happening. Then the thought that this is a seemingly innocent video is removed when we see several… risqué things happening. This time, it isn’t WINNER doing it, but rather the people in the background. 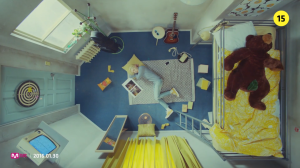 In the opening scene, we not only have Taehyun moping about on the floor, but also a teddy bear on the bed with a leaf covering his nonexistent privates. When the camera pans to Mino’s room, the only seemingly interesting thing beyond the mess that is Mino’s hair is that Lee Hi’s teddy bear from “It’s Over” has made his way over to Mino’s bathroom. Then the scene changes and in several blink-or-you’ll-miss-it moments, the teddy bear is replaced with a couple making out. When we see Seungyoon lamenting in the bathroom stall, we get an unknown someone doing a number two in the stall next to him, and another couple making out on the other side.

There was even a girl doing a seemingly sexual act in the elevator, much to the horror of another member (Jinwoo? Seunghoon?).

This is the point where we remember that DigiPedi also did Stellar‘s “Vibrato” and “Sting” music videos, as well as EXID‘s “Up & Down.”

That being said, the music video with it’s surely difficult overhead shots was seamlessly edited. Not only were the transitions handled perfectly, there were no jarring changes in lighting, and the color scheme provided a perfect contrast to the almost monotone, pop-rock tune and it’s accompanying melancholy lyrics.

Lyrically, the song talks about a male missing his significant other, causing him to lack the energy to do anything. It explains why, throughout the music video, WINNER keeps their stares blank, as if they truly do not have the energy to truly participate in whatever is needed of them. There are supposedly half-hearted attempts during the band practice scenes and the scenes of them in the kitchen, but even until the end, they can do nothing but stare back to the camera.

While I will not talk about “I’m Young” or “Baby Baby,” there is something that must be addressed. With those two music videos perfectly setting up a story line, what is the place of “Sentimental” in the larger picture? Is it part of a story? Is it not? I would say that while the other two are telling personal stories, “Sentimental” is purposely set up as an usual idol music video.

From any other group, this kind of music video would undoubtedly be a highlight and would be preached as creative and great. Seeing as this is WINNER with the bar raised so high, it’s just them being typical idols with their teased rock back concept from the EXIT Movement teaser making an appearance. Take it as you will, but it remains that “Sentimental,” on it’s own and without immersing it within the context of WINNER’s other releases, is a bright MV bringing the sadness of the lyrics out to the forefront.

What about you, readers? How did you like “Sentimental?”