Return of Superman: Part of a Changing Era 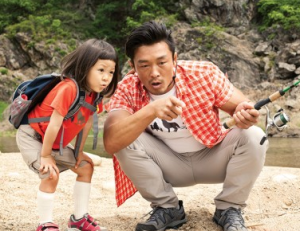 Return of Superman is a variety show with the premise of celebrity dads spending time taking care of their young children without the help of their wives. This KBS show has been on air since 2013 and has since cycled through many celebrity dads such as Choo Sung-hoon, an MMA fighter, Lee Hwi-jae, a comedian, Tablo, Epik High‘s rapper, and Uhm Tae-Woong, an actor. The show has received high ratings and countless awards with much of the public’s focus being on the adorable celebrity children. However, the true stars of the show are the fathers.

Regardless of the fact that these are celebrity fathers, there is a universal awkwardness in finding one’s footing with parenting. At first Choo Sung-hoon found himself doting on his daughter Sarang. He always anticipated her needs, until gradually he discovered that Sarang had a mind of her own, and he needed to communicate with her. Stuck with their children without the help of their wives, these fathers learn more about their themselves and their children all while developing a deeper relationship. But why exactly do all these celebrity fathers have more difficulties than usual in handling their children?

In the Korean societal context, child rearing in Korea is primarily seen as the mother’s duty with the father focused on working and providing monetarily for the family. While some Korean women do work, there is a clear gender divide in wages and in cultural perception. Women that work are viewed as not fulfilling their child rearing duty properly. According to the Washington Post, which quoted Hwang Myoung-eun, a marketing executive in Korea, “I may be a good employee, but to my family I am a failure. In their eyes, I am a bad daughter-in-law, bad wife, and bad mother.”

In Korean culture, there is no such thing as having the best of both worlds as a career women and a mother. Also to further drive women from the workplace, Korean women with degrees have difficulty finding jobs, with 27.7% of the female workforce working part time jobs. If they find a job, they earn significantly lesser than their counterparts. Korean women’s wages are about 44% of Korean men’s wages. Therefore, by will or by default, most Korean women end up having to take care of their young children. 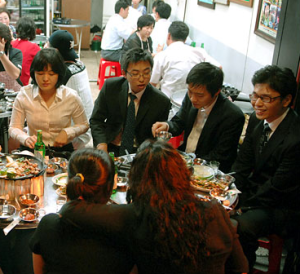 However, fathers definitely have a desire to take care of their children, but any desire is suppressed by the work culture in Korea. Working hours in Korea are long and are accompanied by after work schmoozing, which is seen as essential for building good will with senior office members. Even if Korean fathers were willing to take a pay cut, their purpose for making money is heavily for their children’s future education and tutoring.  Therein lies the predicament: they have the choice to be involved in their children’s early development, or to be involved in giving their children the best education possible.

The younger generation of women see this gender inequality at home and in the workplace. Thus, they are putting off getting married, which would lead to the inevitable pressure to bear and raise a child. 19% of Korean women aged 30-34 are unmarried. To put in perspective, the average age for Korean women to marry is 30.

In response, the government, aware of the low childbirth rate, have decided to implement paid paternity leave, in addition to laws that restrict the number of working hours. By implementing these laws, women would theoretically feel more comfortable starting families and be more assured that someone would take care of their children. The South Korean government is additionally supporting women’s greater forays into the workplace and a healthier child rearing practice. While these are in place, the execution of the two are not perfect, with horror stories of fathers asking for paternal leave being fired, and companies ignoring the limitations on working hours.

In the grand scheme of things, Return of Superman as a popular show is an amazing thing. While most people are watching for the cute children, the real paramount point is the growth in relationship between father and children. For example, Tablo used to eat ice cream with his daughter, Haru, since he didn’t know how to spend time with her. This changed to Tablo developing Haru’s musicality after she showed him a song she composed. The show makes watching a stay-at-home dad seem more normal, which is good for changing cultural perception. Return of Superman has many touching moments mostly stemming from the the rapid changes in the children’s development and in the relationship between father and children. The continued popularity of the show is a good sign that the public believes that it’s important for fathers to be involved with nurturing their children’s development.