WINNER Debuts with an Emotional Lament in "Empty" 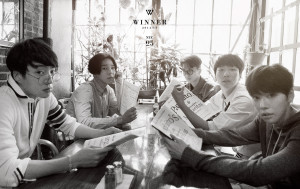 Finally, after much teasing and putting off, YG’s first boy group since Big Bang has debuted. To ensure the fresh-faced boys of WINNER make as big a splash as possible—or perhaps to give penance to fans who’ve waited for over a year—Papa YG decided to release two music videos back-to-back to commemorate the group’s long-awaited unveiling, and both “Empty” and its sibling video “Color Ring” make heavy use of the dramatic intro.

I’ll be the first to admit that I don’t keep up with rookies. What can I say? I’m a fan of established artists, and until the noobies can prove themselves musically, I’ve no interest. As a result, I wasn’t really paying much attention to the hoopla surrounding their win on last year’s season of Win: Who Is Next? (and subsequently WINNER’s show, WINNER TV). Coming to the group fresh meant I approached with skepticism and no real expectations. Of course, having witnessed the debut of another boy group this year, I had quite a bit of the former. However, I must say I’m pleasantly surprised.

“Empty” is one of those videos that most debut groups have—something that will make a statement. Oftentimes that means the video can be cluttered with storylines, settings, and drama-esque tropes to ensure every avenue is explored, reaching every possible demographic until the group settles into its niche. This approach is somewhat effective. It allows audiences to get to know the group’s members, get a glimpse of their individual personalities, and with each dramatic pose, get a chance to sample some of the obligatory eye candy.

We start with our supposed love interest walking into a pretty grim, nondescript room whose only occupant is an answering machine. (Side note: why exactly does she look like she lives in a house that was probably used as a set piece in a horror film?) She pushes the play button and walks away. We then pan to our first heartbroken lover in a phone booth in the rain… because of course he’d be in a phone booth in the rain instead of in his car using the latest Samsung smartphone.

The rest of the video reads like every man begging his girl to take him back. We get the sad, desperate lovers, all in varying states of melancholy. Each is represented by a different location, and the isolation inherent in each measures just how much pain our protagonists are in. We have Minho, the deep-voiced rapper of the group, begging in the drippy phone booth. Then we have sweet-voiced lead vocal and magnae Taehyun, staring forlornly into the city from his apartment balcony. The pretty-boy dancer/rapper, Seunghoon, who’s been stranded at the metro station. Our leader and main vocal, Seungyoon, giving us an emotional vocal performance from his own balcony. Finally we have Jinwoo, our visual hyung who finds himself in a desolate cinema, complete with chairs eaten by years of neglect and misuse.

Taehyun’s scenery changes from the cold isolation of his balcony to the dreary Sunday destitution of a Laundromat, and leader-sshi is randomly at a dried-up beach with a scratched and tattered surfboard, leaning against a ratty beach house. While we do get a few poses against cars in what appears to be an ash storm and an ending shot with the whole group in a room they apparently all share, mostly the boys stay in their respective environments and dole out laments about how they’re “an empty shell, a coward without you” and their “reflection in the mirror is so empty.”

It’s an effective video, insomuch as we get to connect with the boys on a more sensitive level, a bold move considering the group is obviously meant to be a rap/R&B/pop contingent similar to YG’s only other active (and one of K-pop’s most successful) boy bands. However, it works to separate the group from the myriad groups that debuted this year, if only in tone and texture.

While the video itself isn’t terribly original, the group’s opening concept—sensitive boys who appeal to those with a somewhat more artistic aesthetic—is a smart one. That being said, the random environments, particularly the beach scene, which ultimately clashes with the overall grey and misty overtones of the rest of the video, become a bit overkill as far as drawing the eye. There wasn’t very much done in terms of exploring the actual meaning behind each environment, just providing monotone canvases to allow the boys to pout and make eyes to the camera, giving us puppy-dog gazes to ensure at least a few thousand girls fall desperately in love.

As far as the song goes, same old, same old: a sob story about a man who’s lost his lover and is now a hollow shell of the man he once was. The music is also relatively simple: unobtrusive beat, finger snaps, and an acoustic guitar. Commonplace, nothing to write home about. But what sells the song are the vocals. Leader-sshi’s got some incredible pipes, a commendable lower tenor that is strong and impressive. Both magnae and hyung have surprisingly crystal-clear higher registers that have just enough ache to make girls swoon, but aren’t wispy and thin like many falsetto voices in K-pop tend to be as far as the boys go.

For what it is, “Empty” is quite a beautiful video, if for nothing else the color palette and the texture of each environment—the lighting’s simplicity allowing each location’s cracks and crevices to pop and give the viewer a tactile experience as much as a visual one. It’s also gloriously devoid of the obligatory dance breaks part-in-parcel to every single rookie group this year. They attempted to coach the boys on how to look like they’ve lost everything important to them, but in the long run, they only succeeded in producing a lot of vacant stares and overdramatic grimaces. So instead of being moved by the emotion, I’m more tickled by the cheesiness of it all.

But for all its underlying silliness (I can imagine the boys trying desperately not to laugh out loud at just how milk, toast, and corny the whole thing is), the song is quality, the video itself has beautiful landscapes, and the vocals are quite impressive. It’s enough to definitely pacify fans who’ve waited for the group to offer more than teasing glimpses, and it’s sure to attract fans who haven’t been actively following them. They’ve got a potential one in me. The comparisons to their Big Bang sunbaes are inevitable. After all, same company, same concept. However, I’d like to see if this is the extent of their preparation, or if they can actually bring something unique to the ever-recycled boy band landscape of K-pop and ultimately step out of their seniors’ shadow.