Topp Dogg is Still A Contender with "The Beat"

It’s been a hard year for Topp Dogg. Not only do most people not know their name, but those who do became aware of internal troubles when rumors began circulating in late summer that the group was having problems with management. Arguably the most well-known member, rapper/producer Kidoh, as well as one of the lead vocals, Gohn, officially left the group in the early fall.

So imagine the surprise of fans when a comeback was announced amidst the chaos. Out of nowhere, a group thought to be in major trouble has returned with what would seem on the surface to be a thrown together comeback to cash in on their recent media play. However, with “The Beat”, Topp Dogg proves that they shouldn’t be discounted.

Topp Dogg was one of several groups that debuted with a hip-hop concept in 2013 and, like success story BTS, one of the group’s claims to fame was having underground rappers on the team. Not only was Kidoh a member of DNH, an underground rap crew that includes BTS‘ Rap Monster, but he also produced and wrote music for Topp Dogg. In some ways, Kidoh equaled Topp Dogg for some fans.

The announcement of his departure left the creative future of the group uncertain. Not only was the group managed by Stardom Entertainment, which has an unsavory reputation in the wake of the Block B lawsuit, but they also seemed to be losing the core of their team. However, Kidoh is not completely gone, after all–he has producing and writing credits on this new album. And after releasing “The Beat”, Topp Dogg as a group is finally starting to make sense. Under new company Hunus Entertainment, they’ve been rejuvenated and thrust back onto the K-pop landscape with a lot of potential to gain new fans.

Long the victim of ‘too many members’ syndrome, Topp Dogg debuted with thirteen members. Now down to ten (another member, Seo-goong, left last year), I would argue that they’ve finally gotten to a place where most of the members can shine. The group has strong vocalists (Sangdo, Nakta), strong rappers (Yano, Jenissi), a charismatic dancer (Hansol) and flamboyant personalities (A-Tom, B-joo). The line distribution in “The Beat” is decent and all of the members get a fair amount of screen time. 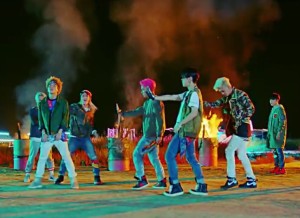 “The Beat” is not Topp Dogg’s strongest title track, nor is it given a very expensive MV. Like a lot of Topp Dogg tracks, it’s a little too over the top, a little too unpolished, and a little too messy for its own good. Their older title tracks, most notably “Annie” and “Arario”, are more memorable musically, but “The Beat” is a step in the right direction for the group.

This year has been ripe with boy groups debuting and expanding on the tried and true hip-hop concept and Topp Dogg’s ‘The Beat’ is very on trend musically. It’s also probably the most generic title track they’ve ever had which (sadly enough) is the first step in appealing to a broader audience.

Using an Arabic music sample and a beat drop in the chorus similar to other recent songs (Big Bang’s “Bang Bang Bang” comes to mind) “The Beat” sounds like a pretty standard K-pop boy group hip-hop song this this year. High points include the soulful vocals in the second-half of the song and Jenissi and Yano’s raps. The rap verses are well executed and anchor the song, instead of sounding tacked on like some K-pop raps tend to feel. The song is loud and noisy but was interesting enough to hold my attention the entire way through. The main problem is that there’s no memorable hook. I found that the group’s visuals and aggressive confidence were more memorable than the song.

I wrote a piece a few weeks ago about cheap comebacks and I would now add “The Beat” to that list, although this budget MV is in no way as skillfully done as Seventeen‘s “Adore U”. However, the two MVs do use similar ’90s throwback aesthetics to varying degrees. Neon lights, cheesy plastic palm trees, colored smoke, and one interior and one exterior location are all that the MV consists of. There’s no plot or story to be had. The boys themselves are relied on heavily to make the MV interesting; and although the choreography falls short of amazing, the boys come through. 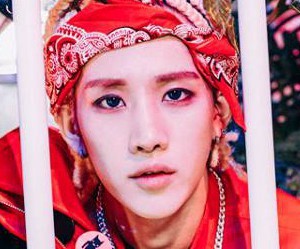 Terrible hair and styling aside, B-Joo in particular really stands out as a strong personality in the M/V. The other boys hold their own as well, although Jenissi only really shines during his rap verse. All in all, the members of Topp Dogg come across as confident rookies in “The Beat”.

If you’d asked me before if I thought Topp Dogg had a chance, I would’ve said no. After this comeback, I’d give them a definite maybe. The K-pop landscape is over-saturated and over-crowded and promising groups get shoved aside and ignored all the time. Topp Dogg has been one of those overshadowed groups for a long time. Even though they’ve lost some talented members, they’re still in the game. With “The Beat”, Topp Dogg is reminding us that they’re here and they’re confident enough to fight for a slice of the spotlight.

So, readers, are you feeling Topp Dogg’s “The Beat”?