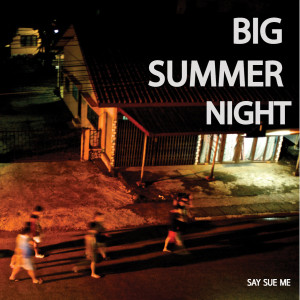 Welcome to this week’s Indie Gem! If you’re like me, you welcome the colder weather of fall with open arms. But some of us miss the warmer days of summer and want a reminder while watching the trees change color. If you’re looking for a band that reminds you of sunny days at the beach, be sure to check out Say Sue Me.

Say Sue Me is a quartet from Busan that produces shoe gaze and surf rock. Choi Sumi is their front woman, playing guitar and singing. Her voice is somewhere between disinterested and earnest, layered on top jangly guitars reminiscent of artists like Best Coast and Yo La Tengo. Sumi is backed by three men, Ha Jaeyoung, Kim Byung Kyu, and Kang Semin.

Byung Kyu is in charge of composing the music while Sumi writes the lyrics. She writes most of songs and uses mostly English lyrics. In an interview for Angle Magazine, she says the reason they use English instead of Korean is “there is sometimes a limitation when trying to express in Korean. That is the main reason why we use English.”

Say Sue Me’s first full album, We’ve Sobered Up, is an exploration in the everyday life and experiences of the band. With songs like “Sorry I’m Drunk” and “Long Night and Crying,” you can expect it to be snarky and sarcastic.

“I Know I’m Kind of Boring” emphasizes Sumi’s feeling that she’s not exciting. However, the arrangement isn’t dull. The guitars are at the forefront in this song; they’re central to moving the song along thematically and musically. The drums dynamic beat complement the guitars and Sumi’s singing.

In July they released their second EP, Big Summer Night. While We’ve Sobered Up features cheeky songs about life, Big Summer Night is more serious. The songs themselves still feature the dreamy surf rock that Say Sue Me is known for and Sumi’s melancholic voice, but most of the lyrics are less blatantly humorous. They’re more mature in some ways and build off the foundation they laid in We’ve Sobered Up.

My favorite song off their newest EP has to be “My Problem.” The song itself is upbeat and hopeful, very similar to the feeling of the lyrics. Sumi starts off by singing about all the qualities she has, but ends with her talking about how being a dreamer is a problem. It sounds like she doesn’t believe being a dreamer is that big of a problem, which is a sentiment I relate to.

Say Sue Me are starting to gain more national attention since they appeared on EBS Space earlier in October. Hopefully with the additional attention Say Sue Me will be able to produce more music and tour more frequently. Their unique brand of “sexy surf rock” (as they like to call their music) is one I’d like to hear more of. So, if you’re wishing it was summer all year long and want a side of snarky self-awareness, Say Sue Me is the band you’re looking for.

You can find Say Sue Me on Bandcamp, Facebook, and Twitter. Both of their albums are available for purchase on Bandcamp and if you either follow them on Twitter or Facebook, you can stay up to date with where they’ll be playing next.