When Pledis Entertainment launched their thirteen-member boy band earlier this year, no one was probably more surprised than Pledis when Seventeen actually came out of the gate strong. Fans were starting to line up, but not just for the cute baby-faced rappers, singers, and dancers in the group. Some were actually digging the ironic, purposeful aesthetics of their first M/V. Shot mostly in one location and featuring not much more than the boys’ smiling faces, “Adore U” could have gone horribly, gloriously wrong. Instead, the M/V got just about everything right: 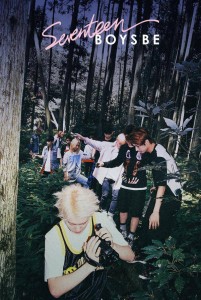 Despite debuting with an obviously budget M/V, Pledis’s creative team made it work for them and the boys. The teasers for their first comeback since debut follow along the same lines aesthetically that they set up with “Adore U.” The teasers feature grainy, candid-style photography dressed up with gradient filters and neon typography. The promos are eye-catching and modern, but most importantly, they’re memorable. Seventeen has a lot of things going for them, but their creative team is making it easy to love them. Who needs money when you have taste (and buzz)?

The moral of this story — just because an idol is on a ramen diet and a company is on a shoestring budget doesn’t mean that a comeback has to be devoid of artistry and good ideas. In fact, the lack of funds can sometimes force creativity to the forefront. Have only one location? Add in some throwback graphics! Have use of a green screen? Add in some quirky, over the top locales! Have a bunch of young, eager idols? Focus on the fun choreography! Have a smartphone? Use it to shoot your teaser photos in an ironic way! Pledis’s creative team deserves a hand for the aesthetically pleasing and artistic route their promotions have taken, even though Pledis probably couldn’t afford those extra four members to make Seventeen’s name accurate.

But of course, Seventeen is not the only idol group that has been forced to work with their won deficiencies in eye-catching ways. Here’s just a few recent M/Vs that have thumbed their noses at the idea that more money means a better comeback:

No list about budget breakthroughs would be complete without mention of EXID, so lets get them out of the way early. Well-known for their lack of funds and tales of woe, the girls of EXID were saved from obscurity by “Up and Down.” which became a huge viral hit months after its release. The M/V is bright and fun and features the cheeky imagery that has become EXID’s calling card, but Hani, LE and company were obviously balling on a budget before their big break.

This M/V is magical. Designed to look as cheap as possible and succeeding, “FM” took cues from Japanese anime culture and ran with it. Although not quite as budget as their breakthrough hit “Bar Bar Bar” (2013), the ladies of Crayon Pop make every bit of cash stretch in this depiction of a super hero fantasy wasteland.

Hotshot is the nugu-est of rookie groups, but “Take A Shot” deserves a spot on this list. This is quite possibly the cheapest K-pop M/V never made…That’s hyperbole, but it might actually be true. It features the boys shot against a simple white background and relies exclusively on graphics and camera angles for any kind of visual interest. That’s it. However, some how, some way, it succeeds. Keep an eye on Hotshot, guys. These boys know how to work a budget, and that’s a skill that might take them far in the K-pop game.

Like her Pledis labelmates, After School‘s Lizzy was working with a non-budget, but “Not An Easy Girl” didn’t seem to get the memo. It’s a fun timewarp of a M/V, featuring seamless shots of a singing Lizzy cut into vintage footage from a film adaptation of the folk tale Chunhyangga. This M/V is as colorful, kitschy, and tongue-in-cheek as it is cheap.

These are just a few budget M/Vs that are designed to take advantage of their budgets in smart ways. What are some of your favorite budget M/Vs?