Talk Politics to Me Part 2: Jonghyun, Textbooks and Hell Joseon 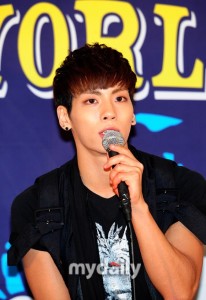 In recent years, Shinee‘s Jonghyun has stepped forward as one of the few politically vocal idols; from his support of sexual minorities to his recent Twitter conversation about feminism. This past week, Jonghyun once again took Twitter to express his discontent with the Park Geun-hye administration’s recent proposed school reforms.

So they say they’re going to reduce the school system in the beginning, middle, and end for induced birth… so they say they’re going to produce a government textbook… After having a baby in such a policy, I would not have the confidence to raise [that child] into a human with a healthy mentality and body. I’m not saying I do not want a child, rather I am scared to have a child.

In 140 characters or less, Jonghyun managed to reference a complex series of current social issues plaguing South Korea; the government’s recent decision to mandate state-implemented history texts, the proposed lowering of the school entry age, and ultimately the growing sentiment of hopelessness among many young Koreans. There’s a lot going on here, and Jonghyun’s comments provide an opportune moment to attempt to unpack it all, so bear with me while I try.

In the past weeks, the history textbook debate has come to a head with the Park administration’s recent decision to issue state mandated history textbooks known as the “Correct History Textbook” in middle and high schools by spring of 2017. The issue itself is rooted in a confrontation between national history and nationalism — and the most accurate way to unite the two.

This isn’t the first attempt the Park administration has made to “correct” history either. In 2013 the Ministry of Education demanded hundreds of revisions to South Korean school history textbooks, including eliminating mention of the Geochang Massacre. Following the revisions, came the Park administration’s dedication to switching over to a single state-mandated textbook.

According to the National Institute of Korean History, the current South Korean history textbooks — provided by a variety independent publishers, but approved by the government — are too liberal. Concerns have been raised about the ideological representations of the North — particularly the philosophy of juche or “self-reliance” — historical relations with Japan, the origins of the Korean War, the Park Chung-hee presidency (dictatorship), and more broadly South Korea’s complex road to democracy in the twentieth century. Liberal groups fear that a state-issued text book would glorify the wrong elements of South Korean history, while Conservative groups argue the current text books already do. 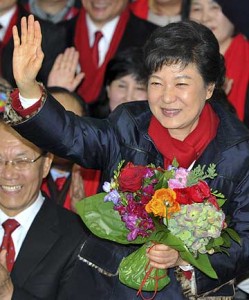 Then there’s also the matter of Park Geun-hye’s perceived personal investment in the “correct” representation of history. Her father, Park Chung-hee, ruled South Korea for eighteen years under under authoritarian rule, and current texts are criticized for their reference of his time in office as a “military dictatorship.” At the same time, current textbooks refer to North Korea as a dictatorship very few times and instead teach the principals of the North Korean government.

Liberal groups fear that if the Park administration gets their hands on state mandated textbooks by the end of her presidency in 2017, South Korean history — the good and the bad  — will be “sanitized.” The complexities of South Korea’s turbulent road to industrialization and democratization cannot possibly be conveyed accurately in a single text, and the elimination of variety would mean that children would be fed only one version of history in school.

There is a fine but significant line between the history of a nation and nationalist histories. The former is more likely to be objective, the latter anything but. Narratives dictated by states fall on the side of nationalist histories. Indeed, Benedict Anderson, commenting on the “truth” of national histories, remarked: “Histories written by the state are almost always false.” Ernest Renan wrote, “Getting its history wrong is part of being a nation.” Such is the nature of state- and nation-building efforts: controlling narratives and information for the sake of maintaining legitimacy. [The] textbook battle in South Korea shows this process in action.

Knowing South Korea’s strong sense of nationalism, it’s guaranteed that either history textbook option will glorify the country in some way. The real battle remains which elements will be highlighted and what will be swept under the rug — but isn’t it better that there at least be some chance for critical thought in South Korean schools?

Lowering the Schooling Age and the Critically Low Birthrate

In addition to state-mandated textbooks, Jonghyun also hit on an another proposed initiative for South Koreans schools: this past week, the Park administration announced that it’s considering lowering the elementary school entrance age by one year. Why? If children start school earlier, they can enter the work force sooner.

For young adults like Jonghyun, the idea of pushing kids into South Korea’s notoriously brutal schooling system even earlier sounds cruel and illogical. Especially when lowering the school age in no way guarantees that there will be jobs for the young adults down the road.

But it’s not just that the Park administration wants the Korean youth to enter a comfortable life quicker. No, they want babies. The Park administration is obsessed with babies — rightfully so, given the countries critically low birthrate. So the logic actually is, the sooner Koreans can graduate from school, the sooner they can settle down, get married and start producing heaps of babies. 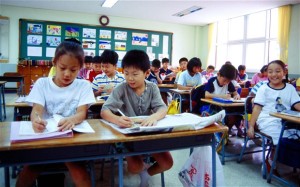 The government blames the low employment rate for the lack of new marriages and babies, so instead of addressing the fact that youth employment rates are at an all time low, working hours are higher than ever, and life satisfaction is remarkably low, they have decided that throwing children into South Korean schools a little earlier will solve the problem.

Cue the heads shaking in disbelief.

Lowering the school entrance age further demonstrates the government’s continued misguided (and misunderstood) attempts to combat the birth rate. Prior to the focus on employment as the root cause of the declining birth rate, the government focused — as is still focusing — on increasing the marriage rate: namely, they the trend of delaying marriage until later in life. While there is some logic to that, given that the social stigma of single parenthood in Korea and the rising number of people who believe marriage isn’t necessary — the fact also remains that even married couples are deciding against having children.

Instead of combating the everyday socio-economic structures that limit South Korea’s youth — like the availability of employment — the government continues to implement policies that fail to get to the root of the problem. The socio-economic problems facing South Korea’s youth are already great, and children are the last thing on many young adults’ minds. The lack of socio economic footing, combined with growing distrust in the government plays into the recent sentiment of “Hell Joseon” — which essentially is the sense of hopelessness the young generation feels without the potential for mobility.

When one adds on to that the known stresses of the Korean education system and the growing authoritarian government presence in schools — is it any wonder that celebrities like Jonghyun are reconsidering their desire to bring children into this world?