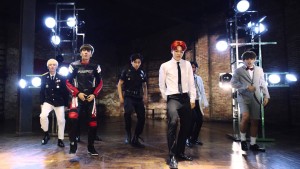 We have recently passed the halfway mark of the year on Earth, which means only one thing at Seoulbeats: it’s time for our Mid-year Reviews!

In last year’s year-end reviews, we introduced a new category: Dance. Seeing as so many of our writers are dancers and/or have a keen interest in dance, we loved the chance to further analyse K-pop idols’ fancy footwork and hand gestures. And that first panel seemed like so much fun, we’re doing it again!

For the first dance review panel this year, we have Willis, Hania, Lo and Gaya sharing their favourite choreographies from the first half of 2015. Let us know your top 3 male and female dances, too, in the comments below!

Hania: I found it hard to come up with my three favourites as I feel like the year so far has been somewhat lacklustre with choreography.

Willis: Not many pieces of choreography in 2015 stood out immediately, so I found myself paying more attention at execution and precision rather than memorable hook dance moves.

Lo: I have to third the assessment of coming up with this list as “fxxking hard”. It wasn’t so bad for the girls half, as “Crazy” and “Ah Yeah” were so intense and fun, respectively, that I had no doubts they’d be on the list, but the guys side was a nightmare. Not a lot of dances really spoke to me.

Gaya: I also had a harder time putting together my male list than my female. There were a lot of dances that were worthy of that third spot (Monsta X, Hotshot), but I ultimately went with History because they had interesting choreography points (like when everyone falls to the ground) and because they managed to make that floor-humping move even hotter than when 4Minute did it in “Mirror Mirror.”

Hania: Willis, looks like we’ve reached the same conclusion for both our male and female #1! BTS have released “Dope” at the perfect moment to make it at the top of this list, with the song taking them back to their usually edgy and fast-paced routines.

As well as their usual strong moves, however, “Dope” also features many little nuances that make the routine such a pleasure to watch, where the moves are perfectly timed with little chimes in the music. It’s one of those dances I can watch over and over again and still find a new move to gush over.

The dance for “Crazy” packs a lot of punch, and adapts to the captivating horn section in the chorus brilliantly. The overflowing amount of attitude in the choreography makes it one of my most-watched MVs, as there is not a single moment where the members falter.

Willis: I also chose “Dope” as the best male dance so far because it showcased how much character each member of BTS has in their dancing. The choreography works well in highlighting their synchronicity, and the energy they emit is infectious.

The musicality in Xiah Junsu‘s “Flower” amazed me. The song is dramatic and has a slower tempo, but the performance was quite cohesive — balancing hard hitting moves with smoother moments. The staging and choreography also added lyrical elements which helped to draw out the epic nature of the song.

[youtube www.youtube.com/watch?v=L7S2a6NJnb8] ​
4Minute’s “Crazy” was the stand out female choreography (by far) in 2015. The members emanate confidence, and they are hitting the beats with a ferocity while still somehow maintaining a connection with the audience. On the other end of the spectrum, “Glass Bead” made it on my list because of the execution of a well choreographed dance. The girls of GFriend add a youthful spring to the steps and keep their formations tight.

I noticed that both Hania and Lo have Exo‘s “Call Me Baby” on your lists. What drew you both to that dance?

Lo: “Call Me Baby” made the list because it reminded me of a musical more than anything. The large cast, the formation changes, the focus on truly identical movement all screamed Broadway to me, and I like that. There’s a cleanness in it that a lot of sung music doesn’t really allow for.

Hania: This dance took a while to grow on me, but eventually made it to #2 on my list thanks to its smoothness and the seamless formation changes. Watching it feels so effortless, as you get lost in the members flowing in and out of formation. Like “Dope”, I also feel like it complements the music, and in fact, bolsters the actual song.

Gaya: “Call Me Baby” impressed me with its formations and how it built on “Growl”‘s choreography in that aspect, but the actual moves themselves — not to mention the execution of said moves — ultimately turned me off. But, at least Exo isn’t Testa‘s gunea pig anymore. Just thinking about the “Overdose” choreo makes me shudder.

GFriend execute “Glass Bead” with aplomb, but the best of the debut dances in my eye was Oh My Girl‘s “Cupid.” They committed to the pep rally vibe of the song; we haven’t seen this kind of marching band-inspired choreo since After School‘s “Bang” and these girls kick it up a notch. Not to mention, my inner Bharathanatyam dancer just loves (literally) hard hitting dance moves.

“Hi” is on the other end of the scale. The Lovelyz members perform it so delicately and create the formations so precisely… Forgive the cheesiness, but it’s like watching perfectly carved ice sculptures come to life. The whole performance is so pretty it hurts.

I notice that we’re split on which BTS dance we preferred more. Lo, why did you pick “I Need U” over “Dope?”

Lo: It looks like the thing that won over Hania about “Dope” was it’s downfall with me. I feel like it’s too tied to the music, that it’s impressiveness comes from the song and dance rather than the dance, and it loses something watching it on mute. “I Need U”, on the other hand, is a complex and powerful routine that carries the emotion and pain of the song even when said song is not audible.

Gaya: Oh, yes, that emotion is also why I put it on my list. “I Need U” is different to the other singles BTS has promoted thus far. You know how groups are always saying that they will show us a different colour? I feel like BTS was able to show me that through their choreography and execution of “I Need U.” Even the walking parts were able to portray the angst in the song.

Hania: Very good point, Lo, about the emotion in “I Need U” as opposed to “Dope”, but I guess that’s the true strength of BTS: they can tailor themselves to different audiences whilst maintaining their trademark character.

It’s refreshing to see such a variety in our choices for Best Female routines! The rest of the year looks like an exciting one for the girl groups in terms of choreography.

Gaya: I am definitely looking forward to all the girl group dances from this Northern summer! And I hope the boys continue to bring it with their dances, though BTS’ crazy dance skills are hard to beat.