Grab Your Drinks and Dance Shoes For Beast's "YeY" 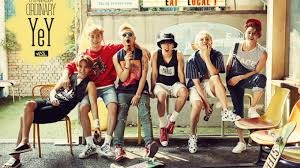 Following last year’s TiMe and Good Luck, Beast has taken most of 2015 off of group promotions, with “12:30” having been released almost nine months ago. Now, though, they’re back, making a comeback with their eighth mini, entitled Ordinary, with title track “YeY.”

“YeY,” on the surface, does not bode well for Beast. They’re known more for edgy, dark, midtempo pieces, rife with emotion and R&B influences, such as “Good Luck,” “Shadow” and “Fiction.” “YeY” is not that. They sound nothing like Beast here. In fact, they go full-out DJ Snake. It is a club banger in the most mindless, synth-driven way; a call to the dance floor that everyone and their mother has done. But hot damn, does it work.

The verses of “YeY” are in Beast’s style — slower and more melancholy, with the focus on the vocals and the lyrics about not wanting to love an ex anymore, but not being able to stop. But underneath that, the music builds, becoming noticeable through Gikwang‘s pre-chorus before dropping at the chorus and letting loose one of the sickest synth lines I’ve heard in ever.

The chorus of “YeY” tosses the usual Beast style out the window. It’s constantly rising and falling, wild and unrestrained, tailor-made for the clubs. And it fits perfectly with the lyrics about deciding to go out and get smashed rather than moping anymore. This isn’t about drinking away the pain, but finding solace in the club, with dancing, and yes, alcohol, but in attempt to feel something good rather than to numb the pain. After all, when has sitting around marinating in the pain of a failed relationship ever actually made anyone hurt any less? That would be never.

“YeY” has officially won my vote for the best song of the summer. It’s alive with passion and drive that makes anyone hearing it want to go out and get turnt in a full embracing of the wildness of summer. And the love I have for the song is matched exactly by the apathy I have for the MV. 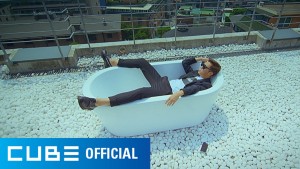 “YeY” is a tour de force of lazy MV production standards. It’s a typical box MV that somehow feels more dull and bland than the typical box MVs because it misses the whole freaking point of the song. “YeY” is about turning to the club to distract yourself from whatever’s going wrong in your life. While there are a few token scenes of Beast in a “club,” they’re not where the emphasis of the MV is put.

Most of the MV is the usual solo shots, group dancing, posing in cars mess that has been made one million times before. It’s awkward and doesn’t mesh with either the chorus or the verses, which makes the focus on them even more likely to induce face-palming. The elements needed to make a competent MV are there — drinking from the bottle, going too crazy on the dance floor, moping at the bar, Dongwoon‘s bathroom meltdown — they’re just really underutilized in what can only be described as an accomplishment in obliviousness.

“YeY” is a one-song argument for Beast to abandon everything they’ve done and become the new kings of the club. While it is a departure from their usual sound, it works so well that if this ends up being a one-off experiment, I, for one, will be soundly disappointed.