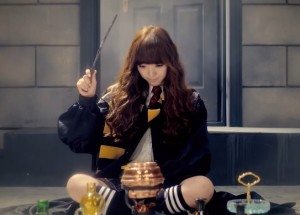 K-pop has been influenced by a number of literary works and wordsmiths, from Peter Pan to F. Scott Fitzgerald. And while these may be more classical in style, more modern works like J.K. Rowling‘s Harry Potter series have inspired Korean music as well. In fact, there are three K-pop songs which were inspired by Harry Potter spells, explored in more detail here.

But, is three enough? What if there more K-pop groups jumped on the Hogwarts Express, and tried their own hand at performing songs based on spells and other aspects of the Harry Potter universe? Here, Gaya and Camiele have teamed up to pitch to us some potential hits, replete with K-pop appropriate lyrics — just in time for Harry (and Jo’s) birthday.

Shinee already has Timelord Rock on lock with “Hitchhiking” from Misconceptions of You, so it’s time for them to add another fan-driven genre, Wrock, to the list! And Expelliarmus is Shinee’s song, that is non-negotiable.  It is a defensive charm used in duels to disarm one’s opponent, though it’s now more well-known as Harry Potter’s signature spell that he somehow manages to use to deflect just about any spell. As Peeved sings in “Expelliarmus Kid:” “Stupefy! Expelliarmus. Crucio! Expelliarmus. Protego! Expelliarmus. Avada Kedavra!!! EXPELLIARMUS!” 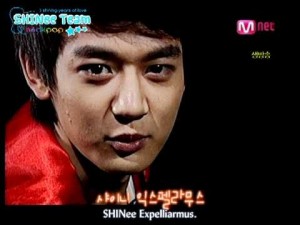 To be honest, We really want this song to be about how the members have their own pronunciations of the spell; but, it may be better to go the more usual route, and make the spell a metaphor for love and frission. The Shinee members keep their hearts well-guarded, but then –Bam! — they meet a pair of eyes that disarms them. They may clutch at their hearts, but as the electropop is bombarded with harsh brassy synths in the chorus, they find that nothing can save them from losing control of their emotions. Think of it as “Sherlock” meets “Dynamite:” a song that hits hard to express Shinee’s shock about what’s just happened.

Expelliarmus! your power’s got me trapped
Your love is dangerous,
Leaving me in the air and out of control
Expelliarmus! you’ve bewitched me
Got me losing my grip on who I am
You disarm me, make me crazy
I’ve lost my self-control. 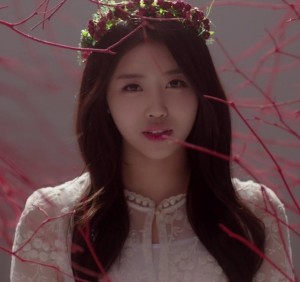 My favourite thing about patronuses is how, while they require so much strength to conjure and display that same kind of strength in warding away hordes of dementors, they are also so delicate and graceful. And that softness and grace is exactly why I think this would be the perfect song for Lovelyz, who display the same with their own music and performances.

Lovelyz would be the aforementioned patronuses, naturally, protecting their beloved with their presence. The song would be a pop-ballad that combines the earnestness of “Goodnight Like Yesterday” and the hope of “Joyland;” and the MV can feature the members, in floaty, white dresses, surrounding Infinite as they ward off Woollim‘s stylists. 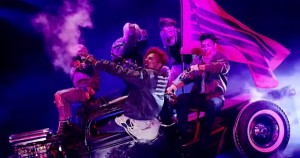 The Marauders may not have been the original trouble making group at Hogwarts; but Padfoot, Moony, Wormtail and Prongs were some of the most prolific firebrands in the series. And the same can be said about Big Bang, whose members have managed to build a legacy for themselves in the K-pop world. Regardless of your personal thoughts on their conduct and actions, you can’t deny their skill and talent.

So, G-Dragon is wild-eyed James, T.O.P is the devastatingly handsome Sirius, Taeyang and Daesung share straight man Remus and Seungri is Peter the shafted. This set-up fits in perfectly with that of Big Bang’s party-minded bangers like “Fantastic Baby” and “Bang Bang Bang.”

See those kids who think they’re tough as hell?
They’re in the corner when i come alive
I got the girlies staring at me
Making their boyfriends jealous
I lock eyes, hold the ladies by their waists
Make those hips sway with a smirk on my face.

If Hyuna had gone to Hogwarts, the Sorting Hat would have screamed out “Gryffindor!” Anyone who thinks otherwise will have to fight Gaya. And it’s not just because she’s all about the “Red;” we could give multiple other reasons, but they are all summed up in this short video below, where Hyuna displays the Gryffindor traits of daring, nerve and chivalry in this defence of T-ara‘s Hyomin:

In the Wrock genre, the Slytherin bands are always the sexy ones; the bad boy/bad girl connotation attached to the Slytherin name helps give these acts an edge in that department. Hyuna the Gryffindor, though, could contribute to breaking this preconceived notion, giving Swish and Flick a run for its (old) money with a saucy rap of her own:

Mmm, yeah
They put my name in the hat
And the hat spoke back
It saw the bright smile on my face and said
Hyuna is the bravest
Hyuna lives without fear
hot like a fire in a Ravenclaw winter
got a tongue meant for magic like a Slytherin flirtation —
wanna get something for your Hufflepuff inflation?

Put my name in the hat
And the hat spoke back, it said
Put her in Gryffindor
Make all the wizard boys holla
They go wild over my red lips
The way I look danger in the eye
They say, “she’s a brave girl.
A pretty brave girl”

I’m not afraid to do what needs to be done
I pinch buttcheeks for fun
But when it’s time to get down to business
You better move aside because you don’t want this
Hyuna’s a brave girl
A pretty brave girl
Every house wants me on their side
You just try to avoid my justice
Like the hate who knows me by name
I’ll sort you out and make sure you know me, too

Readers, what other Harry Potter-inspired songs would you like to see in K-pop, and by who?