2AM Rewrites Fitzgerald, But it's More of the Same 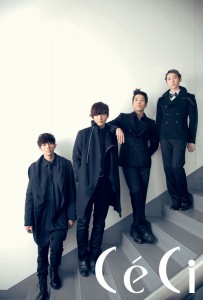 This week, 2AM graced the front pages of Korean and K-pop-related news outlets by dropping their newest mini-album, poetically entitled F.Scott Fitzgerald’s Way of Love.  Following their industry colleagues T-ara, they have elected to name their album after a (once) living, breathing person; however, while the retro 1970s theme was readily apparently in T-ara’s lead single “Roly Poly,” I was completely baffled by the seemingly arbitrary choice of a dead author of American classics.  Yes, they did offer some sort of rationale: apparently, they wish the album to show “timeless love to their fans.”  Okay; but I mean, have any 2AM members even read The Great Gatsby?

In any case, I was excited to hear the 2AM was making a comeback, mostly because (a) I completely prefer them over 2PM (surely I can’t be the only one?) and (b) I have been in love with them and their voices ever since I heard “I Did Wrong.”  Melodramatic though the two accompanying music videos were, I was enthused that the group was branching out a bit beyond the ballad genre — which is not to say that I don’t adore 2AM’s ballads, because I do.  It was just nice seeing their vocals put to a broader use.  And okay, I’ll admit that their performances and dancing were super-awk (I mean it, the whole thing was just cringe-inducing), but I didn’t necessarily fault 2AM for this; the choreography itself was, in my opinion, a disaster, and it’s not like certain members haven’t proved over and over again that they can dance.  Here is all the evidence you will ever need.

So I was hopeful that this latest album from 2AM would not only showcase the somewhat arbitrary and tired “timeless love” thing, but a fresh-faced 2AM that would continue to push the proverbial envelope in producing new and exciting music.  To put it bluntly, I didn’t really get that.  In fact, almost nothing about this album stood out to me in any way, shape, or form.  I hate to say it, but listening to this whole album just…well, quite frankly, it bored me to tears.  Which is not to say that the boys didn’t sound completely fabulous, and that the album didn’t display an impressive amount of vocal growth; but stylistically, I find very little progression.

Let’s start with the album’s leading single (the second track listed on the album), an exceedingly maudlin ballad called “I Wonder if You Hurt Like Me.”  I’m struggling to find something to say about it, because there is almost nothing about this ballad that is new or different from the thousand other ballads that have graced K-drama OSTs.  It does begin with an alluring, rich piano+cello duet, which hooked me immediately because there is very little I love more in music than a cello plus pretty much any other instrument; but sadly, the cello essentially disappears from center stage almost immediately.  It would have been so lovely to continue the cello solo throughout the song, but alas.  Instead, the piano and cello give way to the overused melodramatic string ensemble.  Lyrically, too, the song relies far too much on themes that have been pounded into the ground by many of 2AM’s forebears.  Overall, the end result is uninspired and relatively unimpressive, save for the vocals. 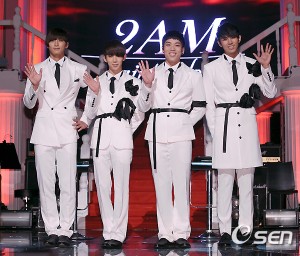 The first track, “You Were Mine,” was actually my favorite off of the whole album, precisely because it was a nice change-up.  The first 30 seconds make me swear that I’ve heard the same beat/melody line in another song, but since I can’t think of what that song might be (though I welcome any suggestion), I’m going to ignore that feeling and instead declare it innovative and a fairly nice touch to the album.  I’m loving the use of harmony as backing instrumentals for the verses.

Track No. 3, “Erase All Memories,” is a jazzy number punctuated by a nice guitar line in the opening.  Overall, it’s not a bad track; I have to admit a slight distaste for the overuse of falsetto here, but that’s just personal preference and it does nicely showcase the impressive vocal range of all of the members.  I’m particularly loving Changmin here, and not just in this song.  Again, though, I am trying to pinpoint something about this song that makes it memorable and am having a bit of difficulty doing so.  At least it stands out from the rest of the album, so that’s something.

Tracks 4 and 5 (“Just One More Second” and “Break Up Well,” respectively) are not, in my opinion, worth talking  about separately because they are almost the exact same song with different words.  Nothing new to report here; they’re both ballads and they’re both vocally solid, but otherwise indistinct.  I really want to say something nice here, but I’ve just got nothing.

Track 6, “I Love You I Love You” is…not a ballad, but then again, I’m just not really sure what it is.  It’s definitely retro-inspired and sticks out like a sore thumb on the album — which, in this case, might be a good thing, but I’m having trouble rationalizing its seemingly random inclusion here.  Don’t get me wrong, I actually like the song and am appreciative of the demonstration that 2AM can deliver a song with a funky beat and some personality, but it only serves to further confuse me about the theme of the album.  Overall, I can’t locate a musical theme or undercurrent that unites the six tracks presented here; three nearly indistinguishable ballads coupled with three distinct tracks from unrelated musical genres = …?

I guess what is truthfully bothering me about this album is that I am just disappointed that 2AM has been boxed into being a ballad group, and that this has resulted in them either being unable or unwilling to evolve beyond it. Yes, I know that 2AM and 2PM were created as counterparts, and that 2AM was ostensibly created TO BE  a “ballad group,” but just because they are a ballad group doesn’t necessarily mean that the tracks they promote need to be completely one-note and feature one thousand shots of Jo Kwon with tears running down his face.  I’m not saying that they have  to become an “idol group” and dance, either; it’s completely possible to sing outside of the ballad genre and put on a dynamic performance without choreography and flashy lights (don’t believe me?  Ask 8eight!).

Then again, this is definitely a personal pet peeve of mine with which you readers certainly do not have to agree, and it extends far beyond 2AM.  I remember when Davichi came out with “Time, Please Stop,” and my college roommate commented to me, “Why do they always have to do that thing where the song is slow at the verses and then picks up into a screaming loud chorus?  We get it, they can hit the high notes.  The formula needs to go.”  My feelings on Davichi’s promotions aside, that is pretty much how I feel about 2AM these days.  We get it, the boys can sing the bejesus out of a ballad.  But does that also mean that they can’t sing the bejesus out of something a little fresher?