The Men of TVXQ Finally 'Rise As God' 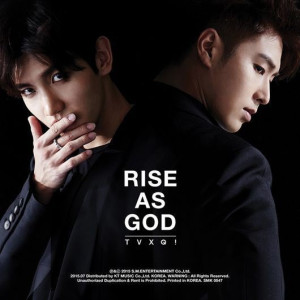 It seems SM Entertainment has been feeling generous with its creativity this year. There must’ve been a bit of a desire to create quality music for music’s sake after the masterpiece that was Shinee’s Odd, and the remainder seems to have been spread out on TVXQ’s final album before we say goodbye to them for two years.

After waiting for what seems like a decade, SM has finally decided to throw their veteran group a bone and give them some music fans can be proud to wield as they wait for the duo’s return. You’ve gotta have large brass ones to name an album Rise As God, and it’s a damn clever title at that. Seems the Gods of the East have stopped rising and are now fully risen as the deities they set out to be almost thirteen years ago.

The album opens with power, a subtle bass bottom introducing us to track “Vertigo.” A soulful note rings out and echoes as Yunho and Changmin begin to sing. It’s a unique track in that while it does hit a high point in terms of composition, it never becomes overbearing or larger than it needs to be. The conceit here is used brilliantly: a man who’s lovesick and dizzy from the very thought of the woman of his dreams.

Fast footsteps on a small alleyway, a shadow is chasing me
Mixed up order, an unknown power, a silent chaser
It’s very secretive, the scent is sweet, the face is blurry but familiar
As my memories get tangled in my dreams, I toss and turn all night
My head is spinning with questions with no answers in an endless circle
I’m getting sucked in, I’m suffocating
I can’t stop, oh

The album’s foundation is laid and the mood set from its first track. The music and vocals here hint at something mature and subtly grand.

Following the subdued power of “Vertigo,” we get back-to-back solos. If I’m being honest, my initial reaction to the teaser for Yunho’s “Champagne” was … mixed. I really didn’t want to like it at first. Lyrically, it’s just typical, “Oh, baby you’re so fine; I think I’m in love” fodder, and the MV really didn’t do it any favors. But as the song leads into the first iteration of the chorus, I couldn’t help but be sort of enraptured with its construction, the laid-back groove pervading the song, and Yunho’s vocals. The first breakdown, highlighting for better or worse Yunho’s rapping, was absolutely beautiful. Making use of guitars, a steady beat, and talkbox (autotune’s more musical predecessor that allows the user to manipulate his voice through a keyboard), it adds charm and maturity to a track that could easily be utterly lifeless and uninteresting.

At the other end of the spectrum we have Changmin’s solo, “Rise As One.” It’s gotten mixed reviews, some believing it to be an uninspiring version of the same wounded artist faux-indie oversaturating soft rock and pop radio. However, if you actually don’t listen to the radio, you don’t hear this type of construction often enough to get sick of it. Though I’ve heard my fair share of Coldplay-esque compositions to realize the format is relatively played out, and while it is a bit of an ego stroke for the song’s writer (attempting to drop a bit of prose to unpack the idea of the Rising Gods actually rising as one god), that takes nothing away from the song in and of itself. The construction fits Changmin’s high tenor perfectly, allowing him space to flex his head voice and giving listeners fully open and expressive vocals.

Perhaps unsurprisingly (even more so given the tracks that follow), these solos were the leading singles SM chose to tease fans with. Though after a few listens I grew to appreciate the solos for what they were, if I’d come to TVXQ cold without realizing what they’re capable of when given the proper material, I wouldn’t have invested my time in this album. “Champagne” has charm, and “Rise As One” is a great example of Changmin’s range, but the songs are just … decent. Certainly not enough to convince me to invest time in a full album. However, I do know TVXQ, and I’m fully aware of their potential at brilliance. And with track four the album begins in earnest.

“Everyday it Rains” is a smooth track reminiscent of ’70s R&B — light horns and a beautiful keyboard foundation make up one of the most brilliant tracks I think I’ve heard from the duo thus far. With glimmers of groups like Incognito (“When the Sun Comes Down”) and to a lesser extent Earth, Wind & Fire (“That’s the Way of the World”), the track is sensual and warm, its composition matching perfectly with the wistful narrative of a man ruminating in the memory of a lover. Add to that the subdued vocal, “Everyday it Rains” compliments TVXQ the duo. It neither taxes nor overcomplicates the group’s vocal dynamic. It takes me back to songs from their discography including Japanese tracks “No?” and “Darkness Eyes,” a sexy sway and lilt to the track that has it on repeat for at least half an hour.

This respectable nod to ’70s ease and musical composition pours over into track “Smile.” With a composing credit to R&B legend Teddy Riley, it’s no wonder the track is as drenched in classic soul as it is. It’s the type of track that takes me back to a time of cassette tapes and walks to the corner dairyette in summer. The horn section reminds me very much of the Young Holt Unlimited classic “Soulful Strut,” making me do just as the song suggests.

Without looking at the credits, it’s obvious someone at SM had the brilliant foresight to get as many outside producers as possible, ensuring there was an added layer of authentic R&B depth on what seems to be the group’s magnum opus. Lo and behold, most of the album’s composers are decidedly Western, offering an honest-to-goodness R&B perspective. This is the type of music one would expect from a group whose first steps into the world were painted in very stark R&B hues and heavy vocals.

Of course, what would a TVXQ album be without some sensual balladry thrown in? Following another piece of triumphant drum-heavy pop (song “Top of the World”), we get track “Apology.” It’s what you put on when you’re on your knees begging for forgiveness, endgame being a little make-up lovin’. It’s sexy and sweet, hot and delicious. Images of candlelight and soft touches, warm breaths and sweet coos in the ear. This is a ballad that could easily take a relationship from the coy flirtation of uncertainty to the heavy caresses of experience. Quite possibly the best ballad the group has put on an album in years. Changmin acquits himself well with this smoky solo track.

From the sweat-slick closeness of “Apology” we get a bit of European House with Yunho’s second solo track, “Komplikated.” Seems SM is on a House binge lately. “Komplikated” pushes the House motif a bit harder than Shinee’s “View.” This is music taken straight from the House of Jack, right off the streets of London’s Soho, and planted in the middle of South Korea. I have to say, if SM is going to start experimenting more with the genre, I’m 1000% here for that.

Given the construction of the album up to this point, it could be said SM was trying in some ways to emulate what they did with TVXQ’s juniors: brilliant R&B and intriguing vocal arrangements, a bit of experimentation with House music, less obvious dance tracks. After all, what works so well for Shinee was first fully realized with TVXQ. And at least in terms of the musical direction of Rise As God, there’s a greater deal of seamlessness between each song.

From the hollow warble and thump of House, we return with more traditional R&B. “Dominus” further solidifies TVXQ’s legendary vocal status. Songs like this track are a testament to the remaining members. The vocal arrangement is uncomplicated but strikes just as hard, creates as much of an impact because it makes use of the loveliness in Yunho’s low-end tenor and the power in Changmin’s higher range. The melding of voices leans more in the way of soft neo-soul, making heavy use of that third minor chord to create an ache in the track that lingers in the chest long after the song fades to black.

Taking stock of all of TVXQ’s albums, as five and two, there’s one thing that has always baffled me: the inability to really close an album. In the past, there would be a slew of a cappella versions of tracks tacked at the end or a simple ballad meant to linger in the ear. It’s been hit or miss in that respect. This time SM absolutely got it right. “Lucky Star” begins on a powerful piano chord, followed closely by a triumphant guitar riff. A throbbing and steady drumbeat pervades the track, making room for large vocals and a profound statement that resonates at the height of the song’s composition: “I will protect you. Can you hear me? I’m your lucky star.” It could be very easy for the vocals to get swallowed up in the largeness of the music; however, the piano offers softer moments that blanket the duo’s voices rather than overcrowd them. When the song reaches its highest points, Changmin and Yunho meet that grandness head-on, matching the guitar and drum combination stride for stride. 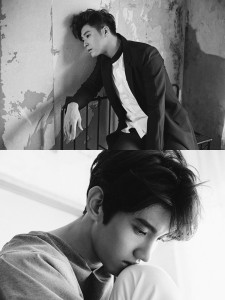 Throughout the group’s five-year tenure as a duo, their albums have ranged from average to underwhelming. With smatterings of nuance and classic TVXQ musicality here and there, the albums were simply too inconsistent to really leave much of an impression. Many fans feared SM was just wringing what they could from the remainder of one of their biggest and most important groups. And now, as Yunho has just enlisted and Changmin is on his way at the end of the year, the company decides to give us a complete album with songs that speak to the duo’s maturity and musical growth over the span of their now twelve-year career.

All I can say is praise the lord and pass the soju! After fans have waited in varying states of aggravation, desperation and finally a slow-burning indifference, finally, finally we’re gifted the album we as fans and they as a group deserve. I question why SM waited until the group was on its way to a two-year industry absence to create an album that not only suits TVXQ as the artists they are now, but also brings the group back to what cemented them as legends of the industry: beautiful melodies coupled with relevant, mature, and creative composition. One can only wonder what they could’ve actually become musically if they’d been releasing music like this post-Keep Your Head Down. After such a long time purporting to be keeping the TVXQ legacy alive, with Rise As God I finally believe it.