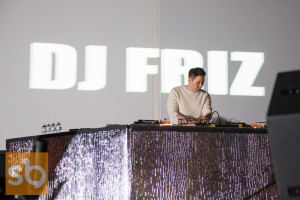 The Korean music scene has an unfortunate generalization issue when it comes to its international representation: the misconception that K-pop is all there is to the entire industry. The misconception, however, is quite understandable as the Hallyu wave has undoubtedly encouraged this, coupled with the fact that pop culture, especially its representation in the West, already serves as the face of most countries’ entire cultures. Nevertheless, when one digs past the spoonfed commodities of Korean entertainment, virtual goldmines of talent and artistry await — one such goldmine: Korean hip-hop.

While the relationship between the Korean and American hip-hop scene is fraught with complexity, to say the least, the arrival of Amoeba Culture, one of the scene’s preeminent labels, in Atlanta shows respect for the genre’s roots. Hip-hop may have been had its birth in the ’70s in New York — coincidentally (or not?) the other stop on Amoeba Culture’s brief tour, if one can call it that — but it has definitely made its home in the Southern city. After the growth of the Dirty South style in the late ’90s, thanks in large part to artists such as Outkast and Goodie Mob, the hip-hop epicenter moved to Atlanta, even while the rest of the recording industry stuck to their anchors of Los Angeles and New York. 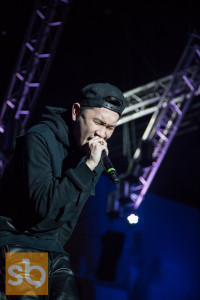 Choiza and Gaeko of Dynamic Duo, founders of Amoeba Culture, are among the few artists that most international fans can agree have a nuanced understanding and respect for the origins of their genre, resulting in their high quality music and loyal following, both domestically and abroad. Performances elsewhere in the US — Los Angeles, in particular — could, and likely would, have resulted in a larger turnout; as such, the choice to perform in Atlanta and New York specifically gave them a chance to pay their dues to hip-hop culture, a great opportunity considering the constant debate of authenticity.

Despite the unspoken fact of Dynamic Duo’s headlining, the showcase was definitely an Amoeba Culture performance, not a Dynamic-Duo-featuring-other-artists type of show. In fact, Choiza and Gaeko may have a long history in hip-hop that even those who aren’t fans respect, but the crowd was most enthusiastic for Amoeba Culture’s rookie crooner Crush. With his dance moves and smooth R&B, his performance brought to mind the soulful R&B-influenced pop of the late ’90s and early ’00s (think Usher), and the crowd loved him.

From his opening performance through his interludes of broken English, the crowd was taken with his charm, singing every lyric and screaming with each body wave and roll of his hips. The way everyone sang along to “Sometimes” was chills-inducing, as Crush simply pointed his microphone into the audience. While the energy of “Hug Me” was possibly the peak of the night, Crush’s solo rendition of “Hold Me Tight,” his collaboration with Loco, was the most fun. After hearing Loco perform it himself in D.C., the flipside was unexpectedly great, particularly since Crush was a featuring artist, appearing mostly in the chorus and hook. He filled in all of the raps, had the audience on their feet and still managed to hit that high note with power and emotion. 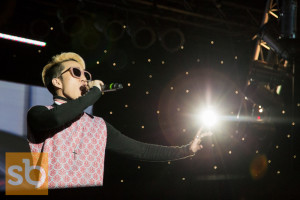 Fellow R&B singer Zion.T joined him on stage for their collaboration track “Just” in a great performance that highlighted the differences in their timbres, demeanors and styles despite their shared genres. Crush is more readily accessible to the public with his pop influence and dance-heavy beats, but Zion.T is much more recognizable. His distinct tonal quality is enough to set him apart from just about any singer, and if one accounts for his signature style, complete with high, ruffled collar, patterned sweater, loose pants and bright colors on this occasion, Zion.T is one of a kind.

Before this show, I’d always enjoyed Zion.T for the aforementioned reasons, plus his production work, but never considered myself a fan. Hearing “Yanghwa BRDG” live changed that. He wasn’t simply emotive; rather, he was detailed and used his voice so precisely to evoke depth and fill out the simplicity of the emotional ballad that the personal connection of the track — his father was a taxi driver — is impossible to miss, even without knowing the lyrics. He may have been a bit subdued energy-wise, but the audience was no less engaged with him, cheering even when they didn’t understand what he said in Korean. 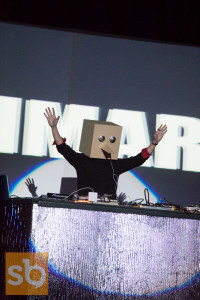 Next to take the stage was Primary. Well-known for his production work — he had a hand in Infinite H‘s “Without You,” which also featured Zion.T — and his signature cardboard mask, Primary’s showcase was surprisingly understated. His cardboard profile was enough to elicit cheers from the audience before he even reached the DJ booth at the back of the stage, but the audience seemed less taken with his music. Perhaps it was because of the lull in energy thanks to Zion.T’s softer sound, but it’s hard to say.

But when Choiza joined Zion.T for Primary’s “? (Question Mark),” the excitement picked back up again, as the crowd went wild for the rapper, appearing dapper in his polka dot jacket, all-black suit and shades. Live, this song is unquestionably fun with a solid beat, jaunty raps and excellent vocals. And it was great to see Zion.T come fully to life for this performance, interacting more readily with the audience than before. 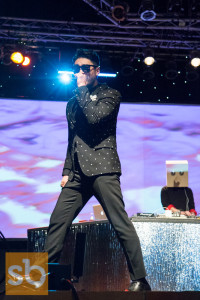 When Gaeko joined Choiza on stage and fully entered the Dynamic Duo portion of the evening, the crowd was definitely bouncing with excitement. The buildup had been steady throughout the show, such that the tension was high but not to the point of annoyance and impatience. After Crush, Zion.T and Primary to whet the palate, the audience was definitely ready for the celebratory nature of Dynamic Duo’s music.

Performing tracks across their extensive repertoire, the duo flexed and showed off, reminding all present why Amoeba Culture has achieved such widespread success and a solid reputation in the Korean hip-hop scene, even in the face of setbacks. From the punch of funk in “Attendance Check” to the maze of beats and sounds that make “Fireworks” a party, the audience was wild, matching Gaeko and Choiza jump for jump.

Gaeko shouted, “Uriga nugu? (Who are we?)” And the crowd responded with a resounding “Dynamic Duo!” This sort of audience participation continued throughout their set, but the most fun moment was when they paused their performance of “Baaam” to practice singing the chorus with the crowd. They made sure that they got the “baaam-baaam-baaam” smooth and the “gateun yeo-ja” syncopated just right. Then, they picked up where they’d left off and brought the audience in with them. 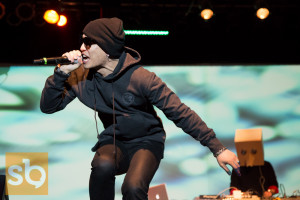 By the end of the night, I was sad to see them go. The entire lineup came out for the encore, only possible once the audience had screamed enough for the underappreciated DJ Friz, who mixed most of the sets of the night (other than that of Primary, of course). But it was hard to pay attention to the music since the crowd erupted in deafening screams when Primary took off his mask.

Upon the announcement of Music Enkor’s organization of this tour, I was admittedly disappointed by the lack of other artists off the Amoeba Culture roster (namely, Rhythm Power and Yankie) but was pleased that the night wasn’t missing anything. Crush brought the energy, Zion.T the emotion, Primary the beats, and Dynamic Duo the swagger and connection to make the showcase a complete, rousing success. Amoeba Culture proved why the label has become a juggernaut in the Korean hip-hop scene, and I hope to see them return to the US.

Did you get to attend Amoeba Culture’s performance in Atlanta? What was your favorite moment of the night?