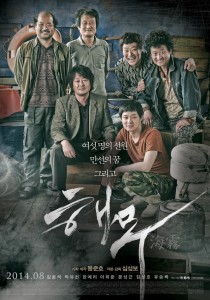 From the genius minds of Bong Joon-ho and Shim Sung-bo, who brought you the critically acclaimed Memories of Murder, comes blockbuster, Sea Fog. Shim Sung-bo took on the role of director this time, marking his directorial debut. The film is based on a true story about a fishing boat crew that takes on a job of smuggling illegal migrants from China into Korea. It brings together acting talent from accomplished veterans [actors] and Park Yoo-chun in his film debut. Presented as a 2014 summer blockbuster, this movie promises to imprint itself on your mind with its dark and gripping themes.

Morgan: The second half of the movie was where this movie won its blockbuster title; Where the crew descends into madness after the migrants suffocate in the fish hold, and Dong-sik and Hong-mae, the remaining migrants, fight to keep their humanity intact. Everything up to the migrants suffocating was purposefully built up to be torn apart. It was sort of like I was in a constant state of shock from that point onwards; hand over mouth, tearing up and maybe even possibly throwing up at points. It was a miracle I even got through the scene where they chopped up the bodies and threw them overboard, only one of the hard-hitting moments of this movie, of which there were many.

Camiele: I think you’re 100% correct about the gradual buildup. Each scene compounds to a huge moment, and when that moment comes, it comes loud and bloody. The actual chopping of the bodies didn’t affect me at all. But what did was the reaction of each person during the act. The captain’s totally unaffected, as if it’s the natural course of things. It’s chilling how clinical he is. The look in each crew member’s eyes is what’s actually frightening: the same crazed expression you see on someone’s face in a horror movie when they have to act out some depravity (usually dismemberment) in order to save their own life. The level to which your mind has to be ripped to shreds to get to that point, it’s so palpable. It really sticks to you.

Morgan: Each member of the crew was introduced with a particular character trait which became the catalyst for their own type of madness. Kyung-gu, who was introduced as a man that sees sex as simply physical enjoyment rather than emotional and finds it easy to give up his humanity and commit vile acts. Chang-wook, played by Lee Hee-joon, who is obsessed with sex yet cannot get any, becomes obsessed with Hong-mae and having her ‘first.’ Bos’n falls back on his role as the captain’s enforcer when faced with the extreme situation. It was like these characters didn’t exist outside these traits. To me, they were incredibly dehumanized and two dimensional, just vehicles for violent acts to shock the audience. They were comic book bad guys that I was not expecting from this movie, especially when there were complex characters like the captain and Dong-shik. 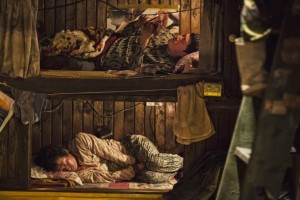 Camiele: I’d argue that Kyung-gu and Chang-wook represent more than just typical tropes. To me, they represent the id, the part of our brains that controls all our urges — sexual and hyperaggressive. These natural urges are always there and are augmented when there’s no one around to tell you the things you’re willing to do to satisfy your urges are wrong. When given that much space, urges they’d otherwise control on land are given free reign at sea, where for sometimes months on end you’re at the mercy of the sea and your captain. The sea, as all nature, is unforgiving, unbiased and the only thing in the world that’s totally blind. The only thing you have to take orders from is your captain, who seemingly knows the sea like it’s his only home, and he interprets the sea’s wishes. The fog descends, and these men are miles away from any other humanity. Kyung-gu and Chang-wook represent what humans are capable of when no one is looking.

Morgan: Dong-sik steps apart from the rest of the crew. His transition is slow, conflicted and well thought out. Most of us grew up with a love of heroes who always do the right thing; they pursue truth and justice as if it’s black and white. This situation is not, therefore Dong-sik can not fill that role; he follows along with the rest of the crew when the captain gives the order for the fish hold to be resealed, even though he pointed out someone was still breathing, and he’s hesitant when the crew start chopping bodies. The driving force for him to keep his humanity was saving Hong-mae, and without her his story would’ve turned out very differently. 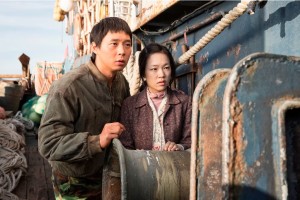 Camiele: This descent into madness Cheol-joo experiences and how that affects the youngest crew member, Dong-sik, is fascinating. As much as the fog can be a conceit for claustrophobia, I think in Dong-sik’s case it very much symbolizes a loss of innocence. I mean, the guy lives with his grandmother, for crying out loud. When first posed with the prospect of smuggling people, the first thing Captain Cheol-joo says is, “Don’t tell your grandmother.” The juxtaposition of his innocence with his resolve to make sure Hong-mae gets to Seoul (and what he has to do to make sure that happens) is just incredible to watch. But if Yoochun’s roles leading up to this are any indication, he’s a fan of choosing characters that have to go through a jarring transition in their development –usually from this general idea of innocence to someone who has to question everything they understood about the world around them and decide who to navigate their way through the reality they’re suddenly thrust into.

I want to pose the idea that Cheol-joo isn’t the bad guy here; rather it’s a combination of the political circumstances surrounding the film (in short, a recession in which the government was shutting down the use of tankers and fishing crews) and the impending fog itself. The desperation of the times pushed Cheol-joo to put his largely innocent crew in a situation they weren’t at all prepared for while the fog itself preyed on their mental stability. I’d even say the fog itself is just a metaphor for a sort of mental claustrophobia, where the walls of your mentality close in, and your sense of what’s right and wrong is seriously compromised — to the point that what you know to be fundamentally wrong seems the best plan of action to, in essence, set you free. 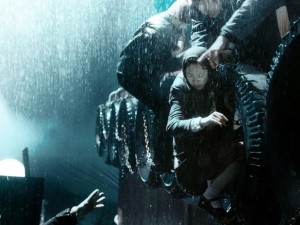 Morgan: There is one more aspect that I want to address: coming from an Australian background, this particular film hit close to home for me. It’s easy to draw parallels between this movie and Australia’s asylum seeker ‘problem.’ Specifically, ‘people smugglers’ are portrayed as the scum of the earth by the media and government; they take large amounts of money to transport people on unstable vehicles, which may or may not reach its desired place.

To an extent I saw this reflected in this movie, especially in the two dimensional characters I mentioned. However, as you said, the movie shed light on the motives of these ‘people smugglers,’ especially in the captain’s case; The social commentary and depth to the characters are no joke. It was an interesting and new perspective the Australian media and government hardly ever touches. Not only do people smugglers carry negative connotations, but the people they smuggle do too. They’ve been called ‘boat people,’ a dehumanizing title that suggests they didn’t exist before they stepped on a boat. It takes no consideration of the history of these people and their reasons for using extreme methods to get to a different country. This movie attempts to humanize these migrants by having them share their reasons and back stories with the crew in order to gather the viewer’s sympathy. This is capitalized on in Dong-sik’s desperate attempts to save Hong-mae. Though I do feel a lot of the social commentary was eclipsed by the movie’s blockbuster themes at times, there’s no question that some interesting questions and perspectives were raised.

Camiele: For me the most heartbreaking moment in the film was Cheol-joo literally going down with his ship. Many touted moments similar to Titanic in the film. For me there’s a direct parallel between that and the captain of the Titanic closing the door of the deck, the water surrounding him and finally killing him. There’s a feeling of going home, being embraced by your true mother: the sea. That entire sequence was at once beautiful and heartbreaking. When the anchor takes him, I saw in his eyes the moment he came to terms with his fate, almost as if he’d longed for it. I think the moment he realized his fate was when he removed the ladder from that guy’s face in the fish hold. He knew — I’m either going to save this ship, or I’m going to die with it. I’d say that last shot is definitely the most emotionally powerful for me. 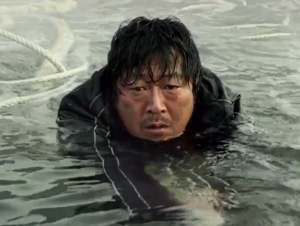 Morgan: The director has built up certain scenes that speak for themselves rather than characters coming out and explaining what’s happening themselves. One of the most horrifying scenes was the quietest; the scene where the captain sat on top of the fish hold to make sure all the migrants had suffocated. The scene would seem so innocent to someone who wouldn’t know what happened; yet it’s an incredibly horrific and confronting scene. It speaks words where there are none.

If you are into the thriller genre, then this is the movie for you; filled with heart-stopping horrors, it’s definitely a memorable ride. Yet it’s not one I would like to repeat anytime soon because it was so draining and horrifying to watch. However, this film was well worth seeing. Despite its fulfillment of its blockbuster title, the plot and social commentary stood out to me for their complexity and maturity. Filled with a diverse range of characters, whose development is at the heart of the production, this story is designed to drag you in and spit you out with possibly a different opinion from what you had before. That’s if you can come to terms with what you just saw straight away; I personally suggest you digest the film for a bit afterwards.

Camiele: My final thoughts about Haemoo are fairly simple. This is a movie that almost requires a second look. There are moments that make you want to look away, even moments that you wish you could erase from your memory, but each scene is integral to becoming fully immersed in the film’s complexity. While it did fall back on some “blockbuster” tropes (including a budding romance and an ending where we’re lead to believe Dong-sik and Hong-mae are reunited, and supposedly with one of Dong-sik’s children), that doesn’t at all detract from the smaller moments, the incredible performances, especially from Kim Yun-seok, Park Yoo-chun, Han Ye-ri and Moon Sung-keun, and a tension that made the skin crawl. The ending was a bit too easy and a bit overkill for me. Ending aside, this is easily one of my favorite Korean films.

Readers, have any of you caught Sea Fog? What are your thoughts on the film?