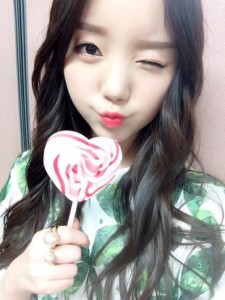 It was White Day yesterday in South Korea, a holiday that is the analogue of Valentine’s Day. On February 14th, ladies present chocolates to the gents (and others) in their hearts, while March 14th is generally reserved for gentlemen to return the favour.

This year, a number of Hallyu stars celebrated the day with their fans: Jo In-sung held a fan-meet in Shanghai, while Kim Woo-bin held his own fan-meet in Indonesia. Got7 also celebrated the first day of their fan party in Bangkok. Meanwhile, Exo continued their new tour with a fourth show in Seoul, while Shinee held their first concert in the famed Tokyo Dome.

But while, White Day is usually about the guys giving, the ladies weren’t slacking off either: Fiestar held guerilla concerts in Seoul to promote their new mini-album, while Woollim girl group Lovelyz took to Twitter to say “Hi~” and wish their fans a sweet White Day.

Did you celebrate White Day? Or did you just happen to receive chocolates from a handsome fella?

Otherwise, did your bias do something special for the day?Let us know in the comments below!