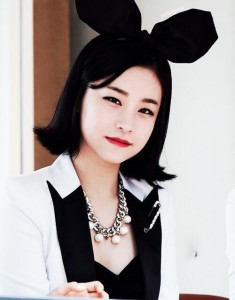 Less than a year after their debut, Chrome Entertainment girl group Bob Girls is disbanding. Adding even more shock to the news is the revelation of member Jina being diagnosed with encephalitis. Her deteriorating condition led to the decision to disband the group.

Encephalitis is a rare condition contracted through a viral infection that causes an inflammation in the brain. The initial symptoms are sometimes mistaken for a cold or stomach infection. In more severe cases, paralysis, brain damage, and seizures can occur. No word on how bad Jina’s condition is, but she will be undergoing treatment that hopefully prevents it from getting worse.

Chrome introduced Bob Girls last year as the little sister group to Crayon Pop. The other members are Dahye, Danbi, and Yoojung. They debuted in June of 2014 with their song “No Way.”

This is a rather unfortunate circumstance for a group to disband, but considering the serious health risks involved, this was the most responsible way to end things. Let us all take a moment to wish the very best for all of its members. We hope that Jina will be able to recover fully from her illness and continue doing what she loves.