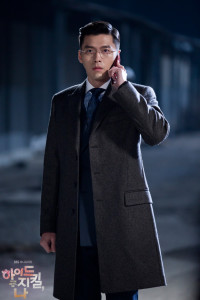 In last week’s episodes, the criminal mastermind Soo-hyun vowed to cause Seo-jin unbearable agony. Although Soo-hyun had a twisted game in store for Seo-jin, I must admit these episodes didn’t deliver the doom and destruction promised last week. We do learn more about Soo-hyun, but the action didn’t quite reach the terrifying climax I was expecting.

Now that we know that the handsome hypnotist is really Soo-hyun (Sung Joon, Lie to Me), we see how he differs from Seo-jin (Hyun Bin, Secret Garden) in how he dealt with the trauma of the kidnapping. Seo-jin focused on trying to control himself, from his shined shoes to his temperament. But Soo-hyun wants to control his environment and others. He chose a profession where he could learn people’s deepest secrets without revealing anything about himself; in his office he is in complete control of what happens. He’s also a skilled hypnotist, able to literally decide what people see in their minds and remember. He works his magic on Seo-jin’s cousin to get answers and even gets Dr. Kang (Shin Eun-Jung, Misaeng) to walk herself out of her office. After being kidnapped and having his best friend and his father fail to save him, it’s only natural that Soo-hyun seeks control over his environment.

Even the way he faces his past shows his need for control. He wears the face of a caring psychiatrist, all the while manipulating the action behind the scenes. Instead of confronting Seo-jin as Soo-hyun face-to-face, he hides behind a mask and toys with Seo-jin’s emotions instead. Soo-hyun tells himself that it’s Seo-jin who won’t tell the truth, but it’s just an excuse so that he doesn’t have to process his own trauma. Soo-hyun believes that he’s facing his past by forcing Seo-jin to confess, when really his actions are a way to avoid the past altogether. We see this when he traps Seo-jin in the warehouse and waits outside, using only a cellphone and voice changer to communicate (a way for him to hide from the physical embodiment of his past). Soo-hyun is so afraid and unwilling to deal with the past that he designs his own psychological experiment for Seo-jin. The experiment is the perfect way for him to stay in control and keep himself emotionally detached from the event. 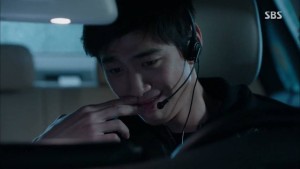 This experiment is meant to torture Seo-jin, but is also a way for Soo-hyun to boost his self-esteem. Soo-hyun has his own twisted brand of confidence, based primarily on the fact that he was betrayed by Seo-jin. Soo-hyun says that people remember what they want to and will even change the story of the past if they want. And what he chooses to remember is not that the kidnapper was the real bad guy or that Seo-jin tried to save him, but that his friend punched his hands to make him let go. By viewing Seo-jin as the epitome of evil, Soo-hyun can see himself as the good guy. He doesn’t care that Seo-jin was just another scared little boy in a tough situation; he can conveniently tell himself that he would never have abandoned his friend if the roles were reversed. And because Soo-hyun sees himself as the good guy, he can justify whatever he does to Seo-jin.

But the self-esteem of both Soo-hyun and Seo-jin is changing because of Ha-na (Han Ji-min, Rooftop Prince). Both men admire her for doing what they couldn’t: facing their fears head on. After weeks of terrifying hypnosis sessions, identifying one of her attackers, and living in fear, Ha-na still hasn’t backed down. At times she hesitates, but ultimately decides to face her fears. Soo-hyun and Seo-jin, on the other hand, refuse to do so. When Dr. Kang confronts Soo-hyun about his trauma, he reacts violently and takes her hostage. Seo-jin cooperates enough to help the police find Dr. Kang, but he won’t be completely honest. He even hides behind Robin, refusing to come out. 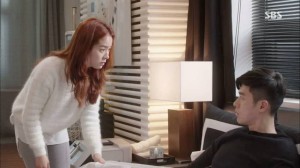 But Ha-na’s influence is slowly changing Seo-jin, giving him the self-esteem he needs to succeed. We can see this when Seo-jin is still half-conscious. Her voice and Soo-hyun’s show Seo-jin’s inner struggle, with one telling him he’s worthless and one telling him he’s not. Ha-na’s influence on Seo-jin is also indirectly affecting Soo-hyun. Seeing Seo-jin save Ha-na instead of himself surprised Soo-hyun; all this time he has been imagining Seo-jin as a coward, hopelessly selfish and cruel. But if Seo-jin has changed into a self-sacrificing person, what does that make the psychiatrist? It makes him into the bad guy, into the monster. After his failure to show Seo-jin’s “true colors,” we can expect Soo-hyun to make another attempt to force Seo-jin’s hand.

Soo-hyun’s plan to torment Seo-jin was good, but the way the scene was written and filmed wasn’t that great. Seo-jin was terrified, but there really weren’t any new scary flashbacks. In fact, I’ve never thought their kidnapper was particularly frightening (in part because he tied them up like some cartoon villain with thick rope). The more I see of the kidnapping, the more it becomes a G-rated scary moment. I could overlook the kidnapping, but since this is the reason why Soo-hyun and Seo-jin are so messed up I expect something a little more traumatic.

Besides the flashbacks, other things also made the scene anti-climactic. It all starts with the method of attack: a suspiciously white gas. Seo-jin briefly heads to a window, but stops when he realizes it’s the same one from his childhood. But neither Ha-na nor Seo-jin even attempt to go out another window or even break one; instead, they 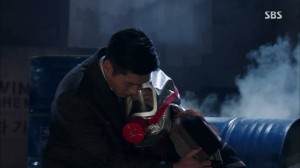 just dawdle around, slowly suffocating to death. Even the sound of the gas releasing wasn’t really that menacing; it was like the sound you hear when the grocery store is misting vegetables in the produce aisle. So instead of increasing the excitement or panic, the scene just became tedious and not suspenseful at all. My sense of pity started to drain fast when the protagonists decided to just sit on the floor and die. Yes, the whole point was to show that Seo-jin wasn’t selfish anymore. But when the characters don’t really seem to care if they live and don’t work very hard to escape, I stop caring too.