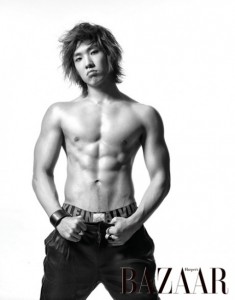 After watching episode one, I wasn’t sure if I should watch the second episode. The first episode had so much forced romance and the story’s progression just didn’t make any sense.

The show resolves around a grumpy old man, Choi Go-bong, who throws a lot of temper tantrums. His behaviour gets excused because of three things: he is old, he is rich, and he is powerful. This results in at least one fantastic scene where actor Shin Ha-kyun, with prominent old man make-up, bathes in money.

Choi Go-bong meets the much younger Eun Ha-soo played by Jang Na-ra. By following the unwritten rules of dramas, Choi Go-bong and Eun Ha-soo despise one another the moment they meet. Late at night, Choi Go-bong starts thinking about his love interest and the scene changed to a quick montage of romanticised footage of the time they spent together. The scenes did not match up with what actually happened between those two, but the message is clear he is starting to fall in love with her. This grossed me out considering he is a seventy-year old man and she is in her early thirties.

A stingy old man who has to change his life for the better? Christmas is creeping closer and I have to admit that makes me more sensitive for stories with a similar plot as A Christmas Carol. I especially liked how Shin Ha-kyun channeled his inner Scrooge Mcduck. The scenes were over the top, but fitted the Scrooge theme perfectly.

Lee Joon’s character did a great job by not murdering everyone – anyone watched Gapdongi? – but his character still wasn’t very likeable. He forced himself on Eun Ha-soo to get out of an icky situation. Fortunely nothing happened, but it still was a uncomfortable scene played for laughs.

Why did Choi Go-bong change back to his younger self and what is going on in his company? Only for those questions I might watch episode 3 next week.

Am I wrong about the first two episodes? Are there any likeable characters? Discuss in the comments!