Lunafly Shows Off Their Spanish in "Quiero Besarte" 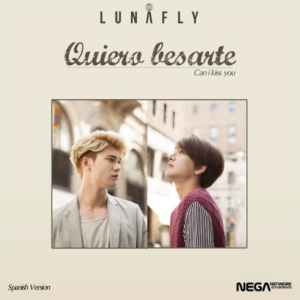 Lunafly unexpectedly gifted Spanish-speaking fans with the MV for “Quiero Besarte” on November 9. An idol-band already known for their ability to sing in both Korean and English, the group showed off another dimension to their language skills with this Spanish release. Quiero Besarte is also the title of the EP released alongside the MV, which features “Super Heroe,” a Spanish version of their English single “Super Hero.”

Members Sam and Yun composed and arranged the track for “Quiero Besarte” themselves and obviously put work into learning the Spanish lyrics. Teo, the third member of the group, has taken a break from team activities due to personal reasons and did not participate in the recording of the song. Even with a missing member, the release has gone over extremely well, and many fans are expressing appreciation for the group’s attempt to overcome language barriers.

Lunafly completed a successful South American tour earlier this year, visiting 5 countries and becoming the first K-pop group to perform in Costa Rica and Guatemala. The tour was organized by crowdfunding platform MyMusicTaste, and South American fans were the main force behind bringing the group to countries that have seen relatively few K-pop concerts. “Quiero Besarte” seems to be a thank-you to Spanish-speaking fans for making the tour possible.

What do you think of Lunafly’s Spanish? Do you think other groups might follow in their footsteps and make a bigger effort to connect with international fans in the future? Leave your thoughts in the comments!