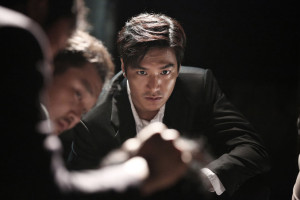 One of Korea’s most dashing heartthrobs, Lee Min-ho, will be gracing our screens again in December, to the delight of his fans. However, this time he’ll be trying out the big screen rather than his usual drama roles, providing an interesting change. Lee Min-ho is set to be the lead for Gangnam Blues, playing the role of Jong-dae, with his renowned co-star Kim Rae-won playing Yong-ki, and director Yu Ha behind the helm.
[youtube http://www.youtube.com/watch?v=xosVfBUyVYM]

Jong-dae and Yong-ki are brothers in every way except by blood, having grown up at the same orphanage. In their adulthood, they struggle to make ends meet and end up collecting rubbish for a living. The men are then swept up into the rapid industrial development of Gangnam, getting involved in gang turf wars and having their bond tested as a result.
The cast also features Jung Jin-young, a familiar face from legendary films like Miracle in Cell No. 7, and AoA’s young Seol Hyun, making her movie debut.

As we know, Lee Min-ho has more experience on the small screen, starring in hits such as Boys Over Flowers, City Hunter and The Heirs. Audiences are used to seeing him with flawless, dewy skin and donning neat outfits. In Gangnam Blues, however, Lee Min-ho has scruffy stubble, a smattering of scratches on his face and wears dishevelled clothing, presenting an altogether new image. His transition from a smooth romantic lead to a gangster in a historical action thriller will be interesting to see, with the trailer hinting at some promising fight scenes.

This film questions how far people will sacrifice their ties with their loved ones for greed, and looks set to be a thrilling journey. Fans will have to wait just a month or two for Gangnam Blues to be released in Korea, looking likely to be a huge hit!