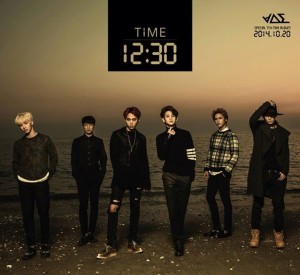 Out of the K-pop groups that debuted in 2009, Beast is one of the few to have successfully avoided the dreaded five year curse, unlike fellow 2009 group MBLAQ. Though Beast struggled in popularity at the beginning of their career, the members have risen above their initial moniker as reject-dols to eventually become one of the top boy groups in K-pop.

Beast celebrated their 5th anniversary this month by releasing their 7th mini-album, Time, and it does not disappoint. Five of the six songs were co-produced by member Jun-hyung‘s production team, whose artistic abilities have only been on the rise ever since Junhyung began producing and composing lyrics. While his early material was not my style, his continued work has shown his growth as a composer and even mirrors Beast’s maturity.

Mature actually is one of the best ways to describe Time and Beast’s musical trajectory. From their cheesy debut to their last mini-album Good Luck, Beast has transitioned naturally into an idol group that not only fits their age but is also still able to appeal to a broad audience, and Time continues that trend.

First up on the album is the type of mid-tempo ballad that Beast excels at: “12:30.” The lyrics detail the ending of a relationship in which two people are as far apart as the hands on a clock at 12:30. While the song is nothing new, Beast manages to elevate it with emotion, especially Kikwang.

One thing Time does incredibly well is highlight each member’s voice throughout the album; each member shines in a different song. In “12:30,” not only did Kikwang’s voice stand out, but I was also surprised at the high notes he hit towards the end of the song.

“Drive” is the weakest song on the album for me. It’s not bad per se, just bland. It begins with a repetitive but catchy bass hook and Junhyung’s rap which begins subdued before becoming stronger. As I’ve said before, I prefer Junhyung’s toned down rapping which he executed well in this song. But even the lyrics can’t save “Drive” as the members sing about going on a drive to forget memories of their lover. They’re the type of lyrics that feel overused and cliched and just add to my disappoint with the track.

The next two songs both feature an acoustic melody that permeates the song. “It’s All Good” brings the guitar into focus musically, keeping the song simple and allowing the members’ voices to be the focal point of the song. Although Dongwoon’s vocals stand out the most, Junhyung’s rapping is also great. His style of rapping suits simple acoustic songs — something that distinguishes him from many other K-pop rappers.

In contrast, “Close My Eyes” is a busier song with the background synth elements reminding me of elements a DJ such as Demicat might include in his music. And although Yoseob only gets a few lines in this song, his lines were the one that got stuck in my head, perhaps because of the “waiting waiting” at the end of his lines.

Instead of “12:30” being the title track, “Stay” would have been a better choice. It’s infectious from the first beat of the song until the very end. The dance-pop elements of the song are reminiscent of Beast’s past dance-heavy title tracks, but, instead of solely being electronic-pop, “Stay” adds in elements of funk — a callback to the underrated tracks of Midnight Sun. Hyunseung’s lower timbre was the perfect way to start off the song and set the tone for the rest of the track. “Stay” is easily one of the best songs off Time, if not the best.

The beginning of “So Hot” reminds me of “Be Alright” but without the beat that drew me in to “Be Alright.” Similar to “Drive,” “So Hot” is not bad, but it just doesn’t stand up against the other tracks on the album with nothing to distinguish it. 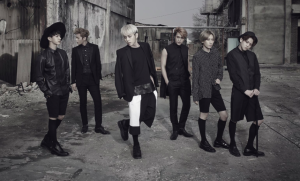 The best thing about the song is the bridge to the chorus in which the music is toned down with snapping in the background to let the members’ voices shine. Doo-joon sings the beginning of the choruses and the inevitable “It’s so hot” line that gets stuck in the listener’s head.

The lyrics of “So Hot” detail two lovers lying in each others’ arms, and I can’t help but feel the song would be improved had it taken a more R&B approach. “So Hot” sounds like a song trying to be seductive, but in reality the track is just too chaste to be risque. Perhaps Kikwang, who co-wrote and composed the song with Noday, wanted to avoid how provocative “So Hot” would be if it were R&B, but with their maturing image Beast could definitely have gotten away with a song like that.

Although Junhyung has been a producer for a while, Time has finally convinced me of his capabilities, and Cube would do well to keep him happy. One of the best things about the album is that each member has a chance to shine, and their voices are able to stand out in a way that past albums haven’t fully exploited. Beast’s growing maturity is expressed well in Time, and the quality of the album speaks to the future longevity of the group. Time is an excellent mini-album, deserving a 4.5/5, and will raise expectations for Beast’s future music — expectations that are sure to be met if Junhyung continues to produce for Beast.

It was hard to pick just one stand-out member for each song so I’d like to know who are your picks. Share your thoughts below!