Tiger JK and Yoon Mi-rae to Return in November 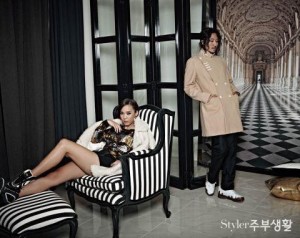 That’s right. Legend Tiger JK and the goddess herself, Yoon Mi-rae, have confirmed they will be coming back to the scene with an album this November! The announcement was made as part of an interview the couple had with Styler Jubu Lifestyle Magazine, for which they also did a photo spread as well as featured on the cover.

In the interview, Tiger JK admits to being in a dark place after the death of his father, renowned music critic Seo Byung-hoo. According to the article, “It has been 8 months after their father’s death. Starting anew, the couple is now preparing to release an album in November.”

Tiger and Mirae also continue to show their undying affection for each other, playfully ribbing each other about the status of their now seven-year marriage.

Tiger JK expresses that he still clicks with Yoon Mirae, and will always have feelings for her. He praised,”From the time I met her till now, no, till forever, we would still be together. No matter how many times a sexy woman has walked past me, I still don’t feel a thing. I really need to thank to Yoon Mirae for that.”

In response, Yoon Mirae said, “Haha. Thanks. But I think if everyday is the same, it is boring. Love needs to have some fluctuations too.”

The couple’s issue of Styler Jubu Lifestyle Magazine will be released in November. As for the release date of their long-awaited album, that’s still up in the air. But, go tell it on the mountain! The King and Queen are returning, and they’re more in love than ever!